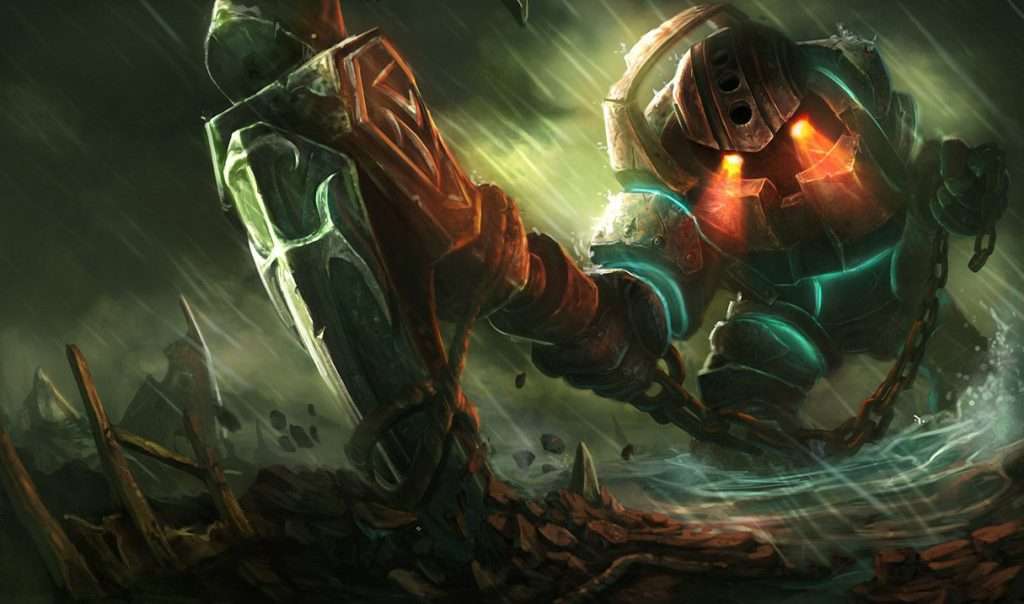 As legend old and lonely sunk in Bilgewater, the armoured goliath named Nautilus roams the dark waters off the coast of the Blue Flame Isles. Due to the betrayal he had experienced, he strides without a sign, waving his enormous anchor to save the wretched, but put the greedy in their proper place. He came for those who forgot to pay the Bilgewater tithe, dragging them down with him below the waves, a constant reminder that no one can escape the depths.

Nautilus was a well-known salvage diver despite the waves washing away his name. Beyond the southernmost reach of the Blue Flame Isles rests a graveyard of ships, allegedly lost while exploring for sacred land, finding a way to trade wealth for immortality. On a fair day, their glitter and holds beckon from beneath the surface. Many crews tried to collect the lost fortune by diving, but no one could match the skill of the quick-sinking hulk Nautilus.

With lungs that could steal the air from galleon’s sails, Nautilus preferred free diving. He never demanded special wages, and he always brought up plenty of gold or jewels for the crew and would ask the captain to toss a coin overboard as they set out to honour and appease the vast ocean. Making an offering is a sailor’s superstition to ensure a safe return.

Years of salvage had used up the easy treasure, and each haul was reduced for each day that passed until Nautilus’ crew learned that their ship and papers had been bought out from under them.

It was a scarlet morning when the new captain came aboard. Hailing from a foreign harbour, he took with him a monstrous suit of brass and iron. He obtained the command because of Nautilus. The captain was obsessed with a specific wreck, shrouded in darkness even on a light day. The diving armour can withstand the pressures of the ocean floor longer than any man, long enough to collect what was hidden in the abnormal murk.

The crew agreed that working was much better than starving, and Nautilus found himself enveloped into the suit, and the wooden deck groaned under the load. He was uneasy and worried after realizing that they had nothing to pay the tithe. The captain was laughing when Nautilus was lowered into the water. He promised the crew that whatever the Bearded Lady was guarding underneath the surface would make them rich more than they imagined. When Nautilus retreated to the surface, they would execute their foolish sacrifice.

All became quiet when Nautilus sank and the light above dimmed. His own breath was the only sound echoing in the iron suit. He was being pulled down, and he felt fear in his heart as something reached out from the depths. It was not the treasure that the captain sought but some sleeping eldritch power beneath.

Nautilus quickly grabbed the anchor chain, which is his last connection to the world above him. He dragged himself up even though the thing below him was dragging him down. However, the weight was too much, and when he was about to reach the surface, the chain snapped. He stumbled back into the inky maelstrom, clutching the sinking anchor. However, a dark tendril enveloped him, and he watched as the dimming outline of his ship faded away and everything went black.

When Nautilus woke up on the ocean floor, he was something else. His metal suit had become a seamless shell around him, covering the bond that the primordial power had made with his spirit. Trapped in the darkest depths, he could only remember one thing, and that was the captain’s broken promise. He vowed that from that moment, everyone would pay the ocean’s tithe. He made sure of it himself.

Driven by the thought, he struggled toward the shore. But by the time he reached Bilgewater, years had already passed, and there were no traces of his crew or the captain. There was no life he could return to, and at the same time, no revenge he could take. Instead, he returned to the sea, letting his anger cover the ravenous, gutting their ships with his mighty anchor. Sometimes distant memories surfaced in his mind, but the man Nautilus used to be was still deep below the surface.

Nautilus’ basic attacks are empowered to afflict the target and enemies near them, making them suffer magic damage and rooting them. It cannot occur on the same target more than once every few seconds.

Nautilus hurls his anchor toward the target direction. If it hits an enemy it will drag them towards Nautilus while he dashes towards them, dealing magic damage and rooting them. If Nautilus hits terrain, he’ll just dash towards the terrain. Nautilus is unable to move or attack while Dredge Line is in flight.

Nautilus creates 3 waves of explosions that radiate from him to the surrounding area, dealing magic damage and slowing all enemies hit. Enemies hit by subsequent waves beyond the first take less damage.

When Nautilus uses this, it chases the target enemy champion, creating eruptions along the way and, upon reaching the target, granting sight of the area for each one. Once Depth Charge reaches its target, it does magic damage to them and knocks them up for a short duration. Enemies around the eruptions are dealt magic damage, knocked up and stunned for a short duration.

Nautilus is a strong early-game support that can still be valuable going into the late game, along with his strong zoning and CC abilities. When you are starting a game, keep in mind that you should always be at an advantage or disadvantage against your enemy, so you can be aggressive towards them or play safe. There are only a few matchups that he can’t be played into, and the pressure he exerts is on top. Currently, Nautilus is a tier one support and the number one blind pick.

Here are some of the strengths of playing Nautilus Support: