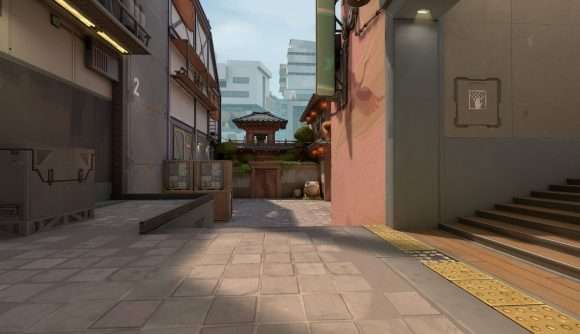 Riot Games’ Valorant is a team FPS that has seven maps to play on: Breeze, Bind, Split, Haven, Ascent, Icebox, and Fracture. The goal is to plant or defend against a bomb (a “spike”.) Apart from the game maps, players can use a shooting range map to practice playing their agent, shooting, and improve aim in simulated game situations.

The maps are promoted as being “suitable for solo or co-op play.” At the start of each map, there are two ultimate orbs in maps that are up for grabs. The orb gives one point to the ultimate power of the agent that picks it up. Some walls and other map features may be fired through. If it has a bullet hole, the wall is penetrable. 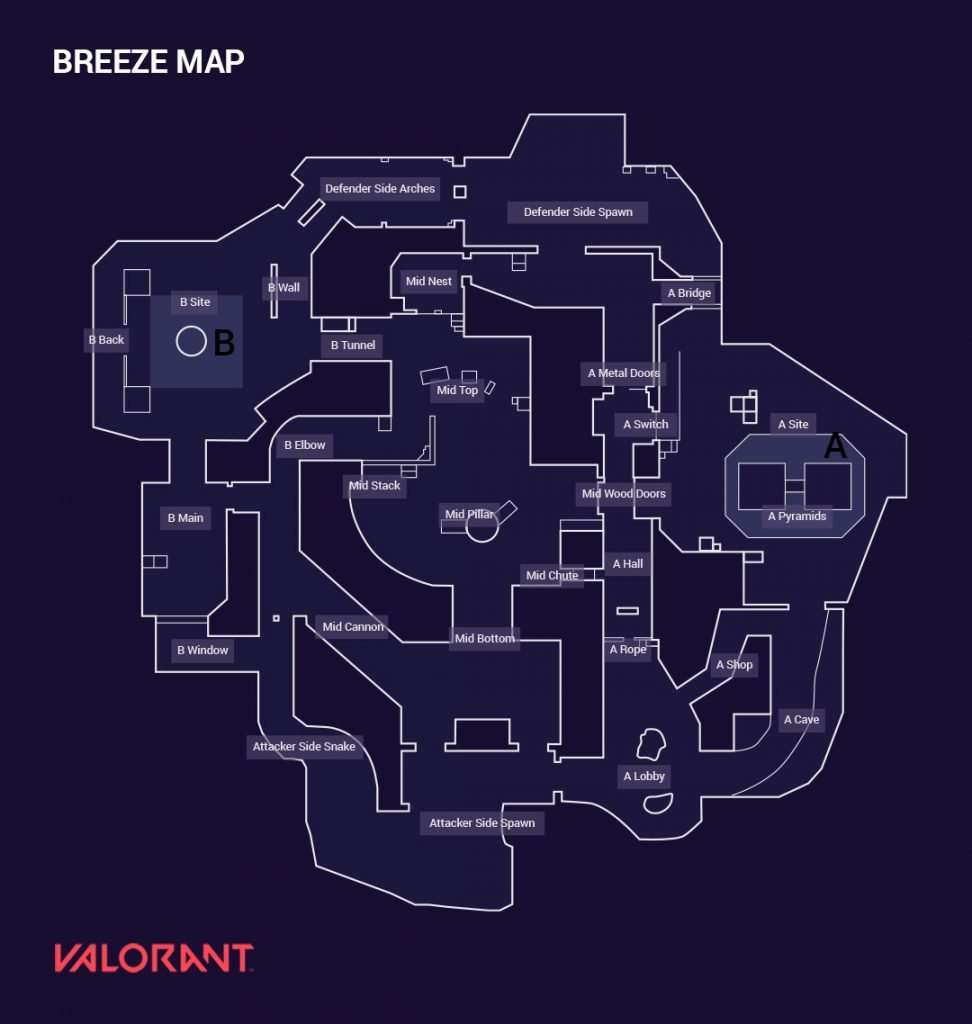 Breeze is located on a tropical island. It’s one of the largest Valorant maps and includes some of the biggest sites in the game. It features ropes for climbing to and from the second floors. It also has one-way drop doors.

A recent poll showed that Breeze is the most popular map on Valorant. 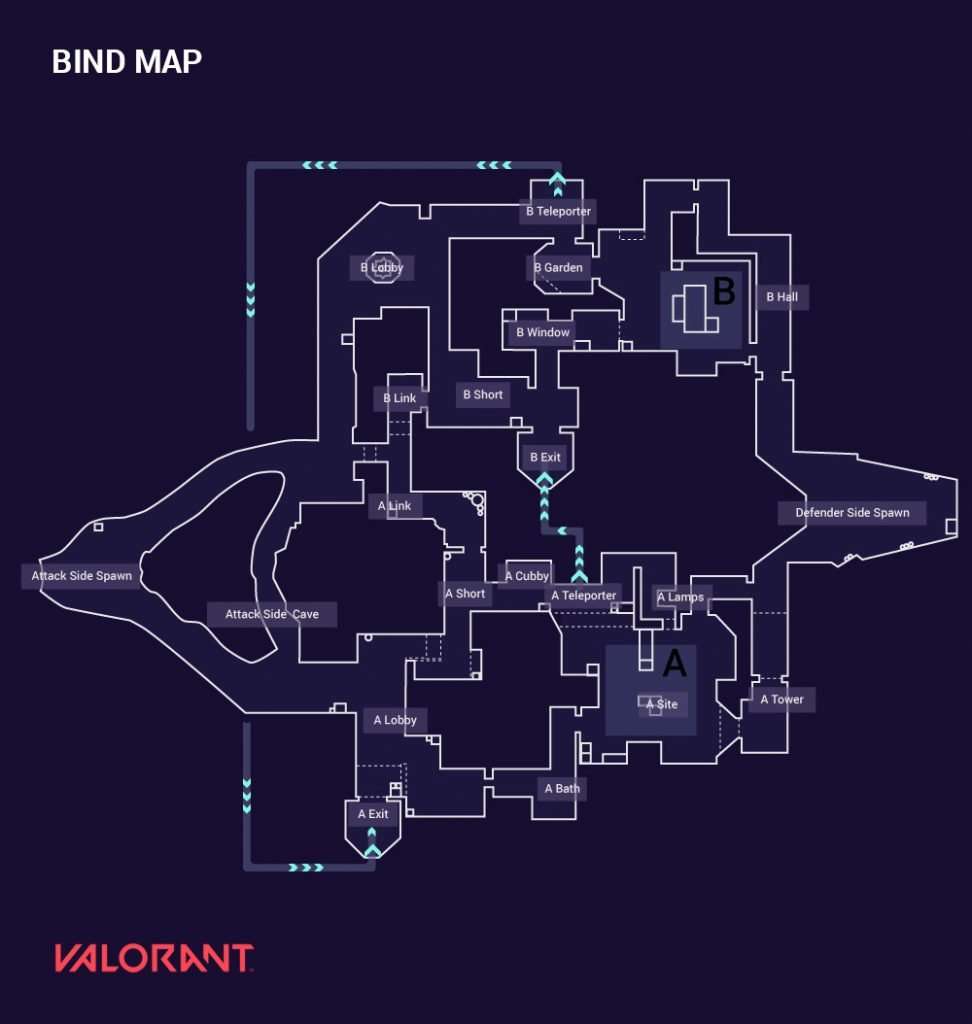 The scenario is set on a beach coast, and two locations (A and B) are included in the map. The attackers enter from the beach coast, so be careful.

Entrance to A is via an alleyway, “Short A” that runs through the map and through building corridors or “showers.” The other site, Site B, can be entered by a beach walkway, “long B,” or via the market and a window called the “hookah.”

There are teleporters, with both of them going one way. One teleporter sends you from long B going to the attacker’s side of the showers. The second teleporter goes from short A to the attacker’s side of the hookah. These allow both sides to change position rapidly or flank their opponent. Because of the loud noise, teleporting is a little bit reckless and may be vulnerable. Teleporters may also be used to transport missiles, guns, and drones.

One ultimate orb is in the showers, and the second one is near the teleporter at long B. 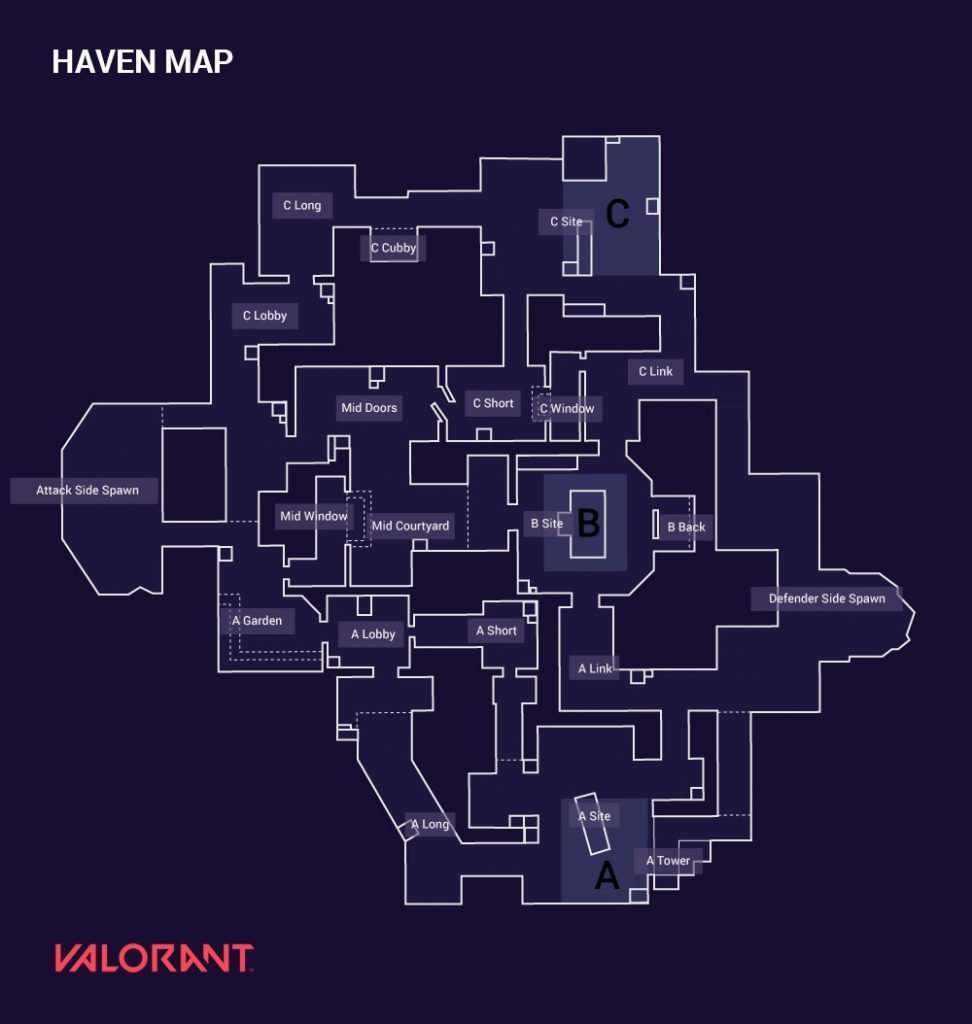 The three-sites map of Haven is its distinguishing feature, as most FPS game maps use only two sites.

Site A is accessed via an L-shaped corridor called “long A” or an underground passageway known as “sewers,” also called “A-short.” Long A is well suited for long-range fights, while A-short is perfect for close-quarters combat.

The courtyard connects to doors known as the garage, allowing attackers to loop around and penetrate Site B through a window. The doors also link from Site B to Site C for attackers and sites B and C can be threatened via the garage.

A straight corridor called “long C” is the other access point to Site C. There is also a cubby halfway along with long C, allowing attackers to use smoke in relative safety. The ultimate orbs are along with long A or long C. 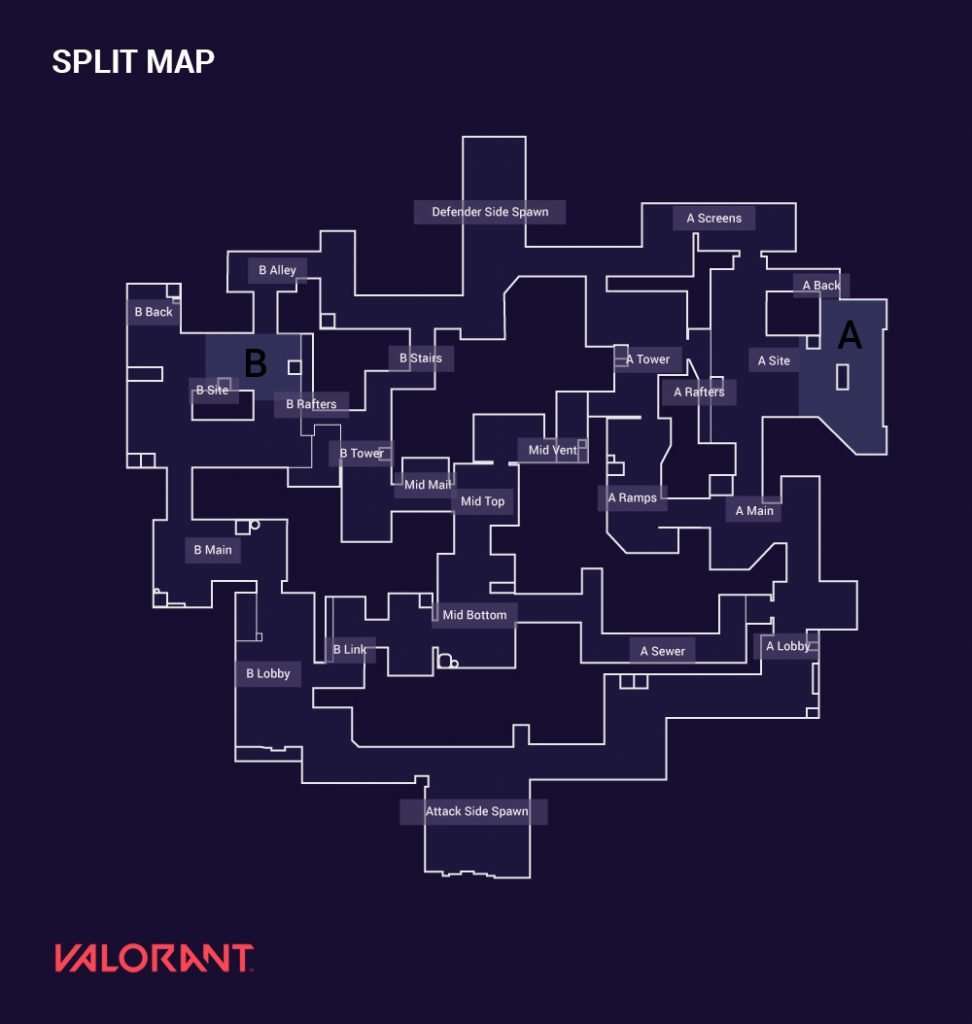 The two sites are on the left and right sides of Split, with a high ground middle area. Ropes let players easily, and quietly, move up or down. The ultimate orbs may be found in A main and B main. 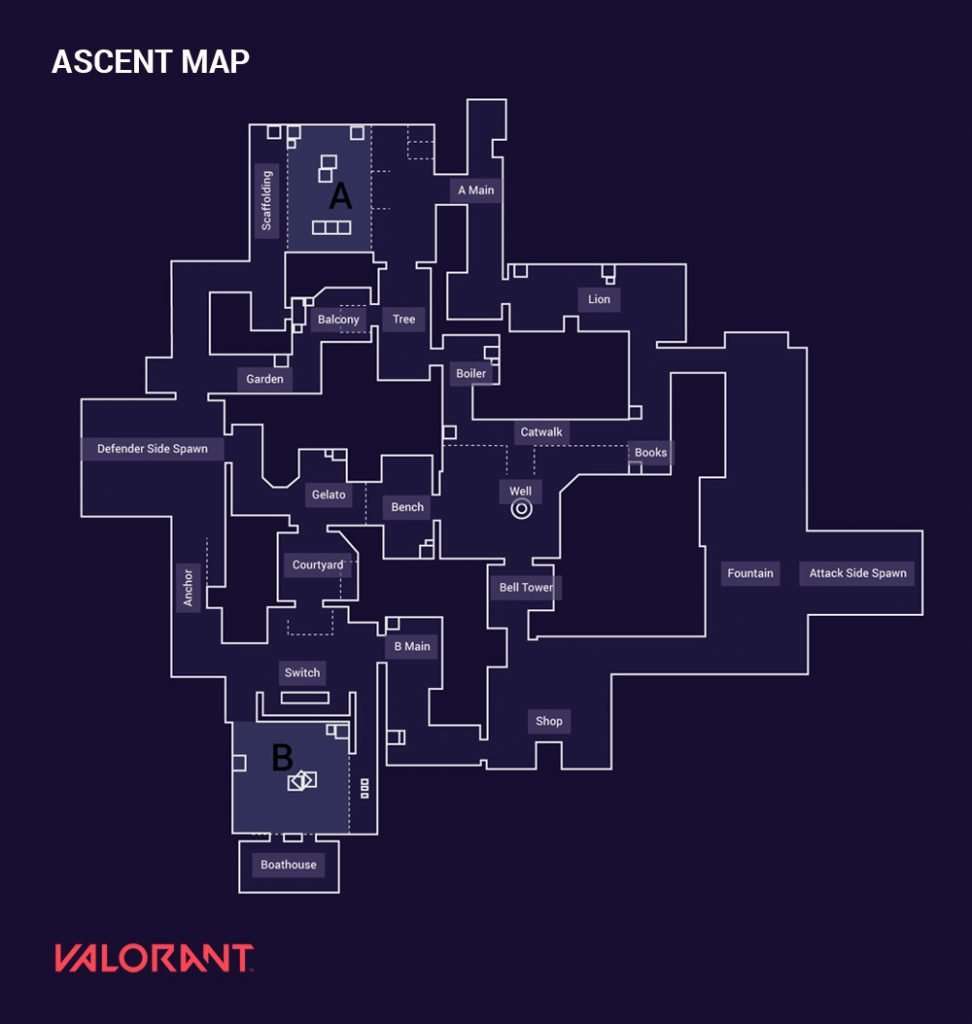 The first map added to Valorant after its release, Ascent is set in Venice, Italy, the map has two sites. It has a large open area that includes a courtyard at its center. The courtyard is a fast shortcut across the map, but it’s dangerous to do so since there isn’t much concealment. One of Ascent’s distinctive features is its use of closeable armored doors, which are always a highlight of any play session. A switch controls the opening or closing of each defensive position’s door. Although armored, the doors are not impervious to attack. 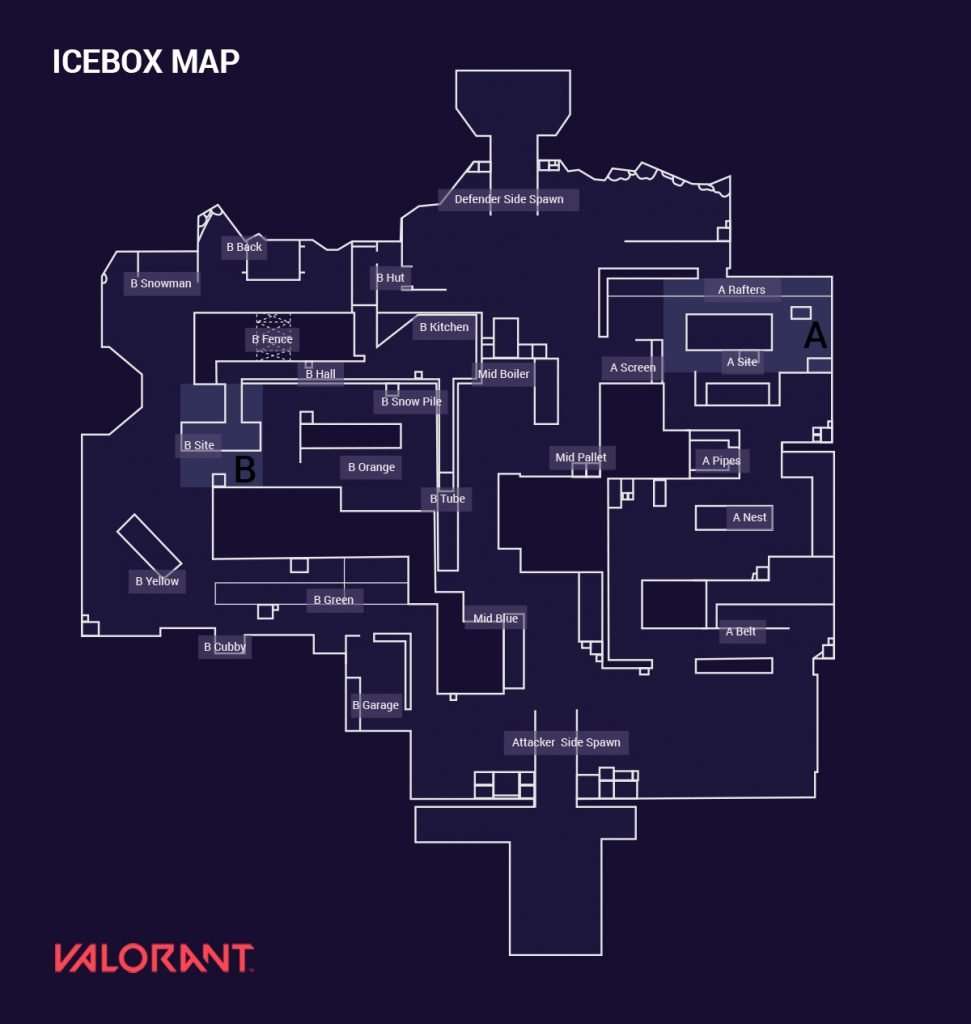 At the start of Act III, Icebox was published, and its environment is cold. It’s the most complicated map yet because it has a lot of depth and turns to cover. Several characteristics set it apart from other garden bridges, including horizontal ropes and planting sites on two levels, which lets you plant spikes on both the low ground and high ground.

It’s a fantastic map for, Jett, Omen, and Raze, because they can effectively use all of the spaces while Cypher and Sova may have difficulty. Sova is a no-go because of so many access locations that his sonar arrow will be challenging to avoid. For the same reason, Cypher’s tripwires can be easily bypassed. 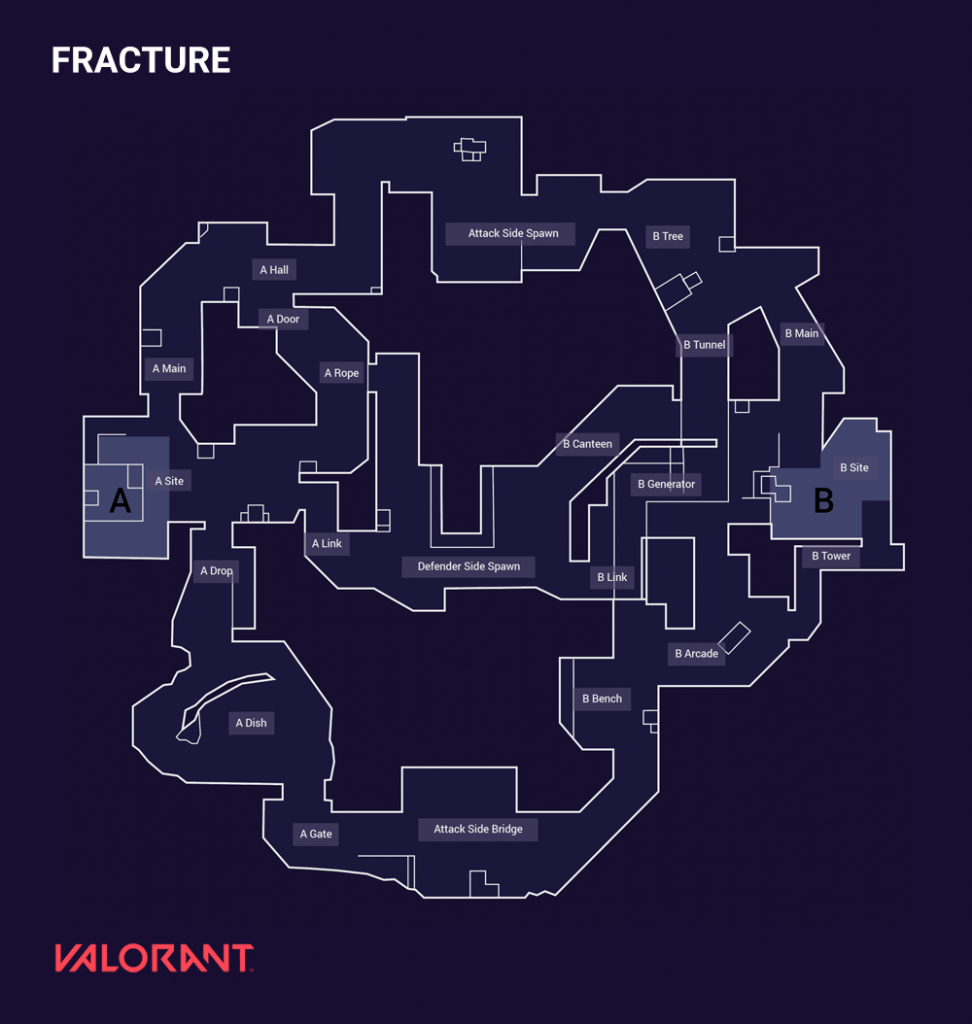 Fracture is the newest Valorant map and it is very different from other Valorant or FPS maps. Players have criticized the older maps for their bias in favor of the defenders. The fracture was designed to balance the fight between the attackers and defenders and it affords attackers plenty of routes for attacks, that it is not possible to defend against all of them.

The defenders spawn in the middle while the attackers spawn from the sides, but they can easily move to the other side of the map with the use of ziplines running in the sewers under the defenders’s spawn area.

Attackers have the element of surprise and they can attack from any angle. The control of the zipline ropes is crucial for both the attackers and defenders. However, movement is not limited to the ziplines. There are a lot of open spaces with nowhere to hide. Unlike in Icebox, Cypher and Sova can have a field day on this map. Although not the largest map, its complexity forces players to spend more time studying this map to come up with strategies. 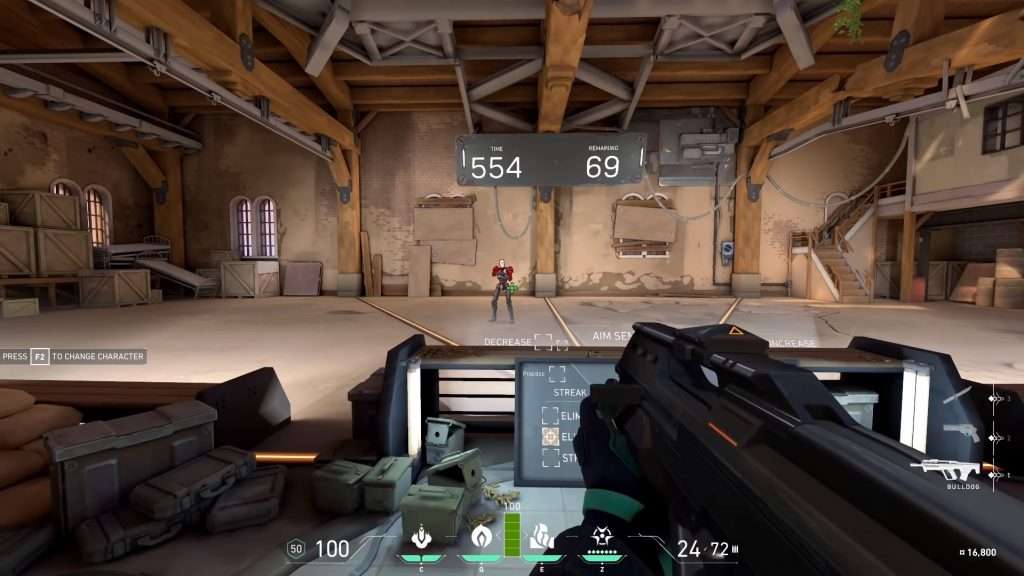 Although not a playing map, the shooting range is used for developing and sharpening your abilities. You can try out any agent and weapons.

You can shoot at moving targets (dummies) at the Shooting Range. There’s also a space dedicated to long-distance shooting to see how far away guns may reach.

You can work on your skill in tight situations by simulating game situations.

How to Uninstall the Epic Games Launcher