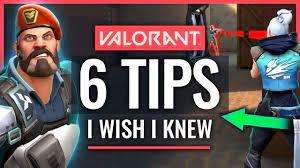 Valorant is a first-person shooter (FPS) game by Riot Games, so if you are new to this type of game, you might be surprised by the steep learning curve. First-person shooters are among the most challenging video games, which take great reflexes and skills to master.

Before you start playing, try to learn general knowledge about the gaming mechanics of first-person shooters, you can check out some videos on YouTube for more information. As you will discover, there are plenty of different FPS games, each with its own set of rules and gameplay mechanics. All these other games do share many common elements. Befoe that Get the Valorant download.

Let’s get started with some beginner advice from developers and friends at Riot Games, which will help you become familiar with the game and what you can expect in terms of difficulty and gameplay time commitment:

Valorant Tips # 1: Try to play with a group of friends

One of the most fun and effective ways to become good at any FPS game is to play it with your friends. You will immediately have an advantage over all the other players who are playing by themselves, so you will be able to quickly climb up the ranks and eventually face off against better opponents.

So if at all possible, try to find some like-minded Valorant players around you, whether it is in your neighborhood or online on some gaming forum or community. It will only take you a few minutes to find people looking for teammates on the internet.

When you begin playing, you’ll see that this is already half the battle won. You’ll be able to converse with one another in real-time via microphones or by typing in the chat. This will allow you to plan and discuss potential strategies for various circumstances, which is considerably easier when playing with friends rather than alone.

Valorant Tips #2: Work well with your team so you can get to the next round

The second important factor that can help you win games is being a good team player. There are many different champions to choose from in Valorant, and they each have their various strengths and weaknesses.

Riot Games also said that understanding the role of your champion will help you make better choices during any game. For example, if you’re playing as an assault champion (who can deal high amounts of damage), it’s best to stay near the front lines of combat. In contrast, a support champion (who specializes in healing and protecting teammates) should hang back from the fight and instead focus on keeping their team alive.

By being a flexible player who understands how to play more than just one role, you can be much more helpful for your team. And since every champion is different, you will learn how to play as new champions by asking your teammates for advice.

So if you’re playing with a group of four people and two of the members already have an assault champion selected, then it’s probably best that you pick a support or defense champion instead. And if everyone has already decided their champion, you should probably try to play as an assault champion.

Remember, each game you play will be different, so make sure that you understand how your champion works well enough before jumping into the game!

Valorant Tips #3: Choose a hero with a fun or rewarding gameplay style

When choosing which champion to use, keep in mind that not all champions are created equal. Some champions will be able to jump into battle and quickly kill most enemy champions, whereas other champions might need a little more time to get the job done. Some heroes have specific abilities to attack from far away distances, whereas others might only be capable of attacking up close.

It’s also helpful to pay attention to the different maps you will be playing on since your choice of hero will vary depending on the size of each map. For example, “small” maps are perfect for heroes who have good mobility and can quickly traverse the map without relying much on their abilities.

But there are also “large” maps that can take several minutes to traverse and require you to use your abilities (which are the primary way you’ll be able to deal damage). So if you’re playing on a large map, then it’s probably best that you choose a hero who has good area-of-effect (AOE) abilities.

And no matter which champion you choose, don’t forget that you can increase the damage output of your abilities by using them more frequently! The more times an ability is used, the higher its charge level becomes, leading to more powerful attacks. Learning how to charge up each power properly will come in handy when playing against more experienced players.

One of the most important aspects of choosing a champion is that each has its unique abilities or mechanics that you need to master. Some abilities might only require you to click on them once, while others require you to charge up before using them (just like your regular auto-attacks).

Each champion also has a unique way of moving around the map, from dashing forward to jumping in the air and even teleporting across long distances. There also might be some abilities that you can use to move out of harm’s way quickly or to close up any significant gaps between you and your opponent.

So if there is a particular champion that you enjoy playing as, then go ahead and use them! Not only will you have an easier time getting used to their abilities, but you’ll also feel more confident about your chances of winning.

Valorant Tips #4: Watch how experienced players and the enemy team play the game

It can be helpful to watch full-length videos of experienced players who can show you how to use your abilities and act during combat appropriately.

But if it’s your first time playing, you should start by watching short videos that showcase the different heroes in action and how they attack and do counter strike moves. It will give you a good idea of each champion’s gameplay style (such as if they’re more of an “adventure” or offense hero) and what kind of abilities you’ll need to master to play as that specific champion.

Watching these videos can also be helpful if the matchmaking system places you on a team with two other players who are playing as defending champions, but you choose to be an assault champion instead. This way, you might be able to change your gameplay style a little bit to win the match and get that red star that everyone wants!

Valorant Tips #5: Practice using your abilities on the practice range

It can also help you get used to each champion’s various abilities by practicing against dummies when playing valorant. The shooting range area in the Valor Training Grounds is an excellent place to start since it allows you to move around and use your abilities without having to worry about being shot at by enemy players.

In addition, the shooting range’s wacky target dummies can also help you learn when to activate specific abilities at given times (such as if it’s better to start your dash right before getting shot at or just after you get hit).

So whenever you’re playing and get killed by another player, don’t be afraid of using the “Camera View” button and scrolling over to watch how they use their abilities. You might even gain a few strategies for using your abilities more efficiently!

Finally, don’t forget to complete the game’s tutorial since it will show you the basic principles of Valorant, such as the game’s champions and their abilities. It may appear inconsequential at first. Still, it’s worthwhile going through because the tutorial will gradually prepare you for the various challenges you’ll encounter in an actual multiplayer battle.

It’s difficult to resist the urge to skim through all of these instructions and immediately join a PvP match, but if you don’t comprehend your champion abilities or how they perform, you won’t be very good at the game.

Remember to go through the tutorial, practice on the shooting range, and watch brief videos of prominent players playing as your chosen champions! You’ll be able to become a Valorant hero just like them if you put in enough effort and perseverance!

Other Tips and Tricks

You can check out more tips and tricks by looking at various websites and participating in forum discussions among fans. There are trips that can help you save money, hold angles, work in a straight line and scope what the other team may be doing. Successfully planting weapons for attack, how to run faster and start defusing and other simple tips are available from sites of trusted partners. This will helo new players start shooting better.

You can also catch the latest news and content related information online.

How To Make A Saddle In Minecraft

June 29, 2022
We use cookies on our website to give you the most relevant experience by remembering your preferences and repeat visits. By clicking “Accept All”, you consent to the use of ALL the cookies. However, you may visit "Cookie Settings" to provide a controlled consent.
Cookie SettingsAccept All
Manage consent