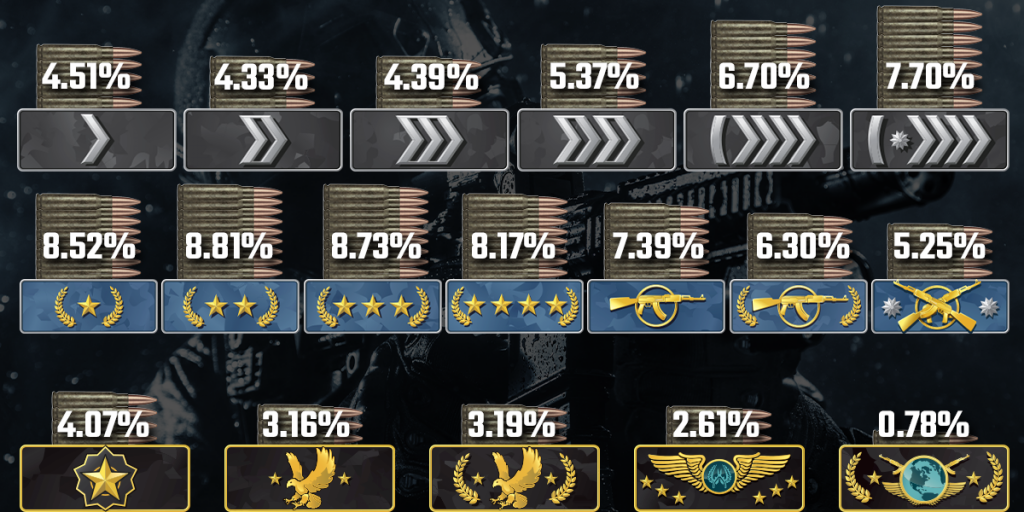 One of the issues in Counter-Strike games is finding similarly skilled teammates and opponents or those with the same level of play, and the developers created the CS: GO ranking system to address this problem. CS: GO ranks can be challenging to wrap around your head, especially when you’re exploring the game for the first time. There are few in-game explanations to help you figure out how to begin with CS: GO ranks, and it doesn’t help that earning your stripes will take longer than other FPS games.

In this guide, you’ll find out everything you need to know about CS: GO ranks and ranking system, how to begin matchmaking, and how to rank up seamlessly!

There are 18 CS: GO ranks, and they are as follows:

Silver 1 is the starting tier of CS: GO players, and it’s the lowest rank you can achieve in the game. Meanwhile, at the very top is the Global Elite, and it is often reserved for the very best players in professional or competitive Counter-Strike. However, the most extensive ranking clusters are Silver and Gold Nova, meaning you need to hone your skills to reach higher levels like anything beyond Distinguished Master Guardian.

What Does My Rank Mean?

You can classify the CS: GO ranks into tiers, and generally, players show the same behaviors as other players in the same ranking, with some exceptions. For example, Master Guardian or higher ranking players are usually familiar with the economy system for the first rounds, requiring less team communication. Meanwhile, those at Silver tiers are likely less familiar, and there’s minimal to no strategy involved in their gameplay.

The ranks in Silver are usually where smurfs (higher-ranked players on different accounts) are commonly found—because of this, escaping the silver division can become highly challenging for new CS: GO players. Those in Gold Nova sit in the middle as they start to learn more about the game as they climb the ranks, including in-game economy, spray patterns, pop-flashes, and smokes.

The Gold Nova 3 to Gold Nova Master serves as a checkpoint for players, indicating above-average skills in the game. Meanwhile, Master Guardian players are usually more advanced and knowledgeable of in-game economic buy trends, sprays, retake coordination, and site execution with utility. Finally, anything above Distinguished Guardian Master is where the best of the best in the game reside.

How To Get My First Rank in CS: GO?

Ranks are indicators of your skills in CS: GO, and you can’t get it without playing ranked matches. You’ll need to win ten ranked competitive games to earn your first CS: GO rank. You’ll be able to play around two games every day, helping you determine the level of your skills in the game. After scoring ten wins, you’ll be assigned to one of the 18 ranks mentioned earlier, depending on your performance.

From this point on, you’ll be able to have an unlimited number of matches at your disposal – helping you rank up with ease. However, remember that you can only team up with players five ranks lower or higher than your current standing, except for a premade team of five. CS: GO rankings depend on the player’s wins and losses in ranked matches.

If you win several matches, your rating will increase, and you’ll receive a higher rank. However, if you lose some, the rating will also go down accordingly, and there’s a chance that you may downgrade from your current ranking.

How To Rank Up In CS: GO

The most efficient way to rank up in CS: GO is not scoring the most kills or constantly earning MVP status. That’s because in CS: GO’s matchmaking, the number of wins matters above everything else, based on chess ranking systems such as Elo and Glicko-2. After all, 1v1 chess ranking systems can’t work well in 5v5 shooters, thus the considerable impact of a player’s win and loss ratio on their rankings.

Another crucial factor in the game’s ranking system is whether your team can win against higher-ranked players based on matchmaking ranking compared to them. To put it simply, if you’re going against a team with a higher matchmaking ranking than you and your allies, but you manage to win, your numerical value increases significantly more than if you win matches against opponents you can beat easily.

The bottom line is, scoring wins is the best and most efficient way to rank up in CS: GO. However, you can mitigate de-ranks by maintaining a relatively high K/D ratio. Meanwhile, if you’re looking to rank up fast, you’ll need to join a team of like-minded and highly skilled players sharing your desire to reach the very top of GE.

However, CS: GO’s system is a lot more complex than this and typically has metrics for how often and how constantly you play the game. So even though massive play sessions may feel like an excellent way to boost your ranks, for each match you play in a row, the points you gain or lose are reduced.

That means playing one to two games every day for a week is better than squashing all of those matches into one uneventful play session. Plus, it’s also a lot better for your health!

Although ranks are vital in professional and competitive gaming, remember, your rank isn’t everything. The ranking system enables players to make their games handier, extended, and exciting as the fights between teams become more eventful. However, it’s still just an arbitrary name defining how other players perceive you. Regardless, if you focus on becoming better at the game rather than winning, expect your climb to the top to be seamless. And don’t forget to have fun!