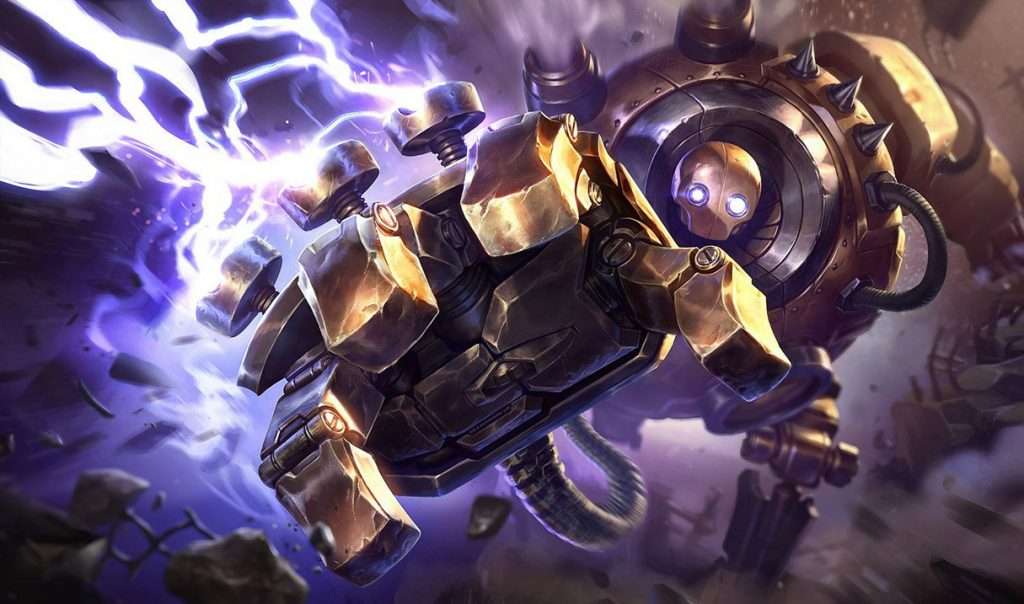 In League of Legends, the Tank class consists of robust melee champions who sacrifice high damage to offer better crowd control. Meanwhile, the Fighter class or Bruisers are short-ranged combatants, excelling in dealing and resisting damage. Blitzcrank is a combination of both classes, offering robust strength and crowd control.

Blitzcrank is a massive near-indestructible steam golem initially built to merely dispose of hazardous waste in the prestigious city of Zaun. However, after a while, he became defective, and it wasn’t long after their original creator abandoned them to rot.

But an inventor named Viktor discovered the golem, giving them another chance in life—with more power, thanks to Viktor using the element “Hextech” in Blitzcrank, making him more powerful, bringing his capabilities outside his original task.

Over time, Blitzcrank started to develop their very own thoughts and learn about their surroundings. They’ve evolved beyond the bounds of their initial programming. All thanks to the help of Viktor and the power of Hextech.

Now, Blitzcrank selflessly uses his new-found strength and durability to protect the people of the undercity.

Shortly after the development of Hextech inventors and scientists ran to Zaun. Unlike in Piltover, here they could experiment with volatile materials without caring for regulations. These experiments often ended in disaster and toxic chemicals spilled into the streets of Zaun.

A team at the college of technology developed steam powered golems who would remove the hazardous debris. These golems worked through days and night carrying waste to the growing number of disposal sites around the city. Even among these machines accidents were common and these robots were frequently sent back to the college in pieces since the gathering of slime at the bottom of Zaun wasn’t easy and over time these acidic chemicals wore down the metal these golems were made of.

Then came an ambitious creatore, called Viktor, who wanted to create a machine who could clean more effectively and eliminate the need for costly repairs. He gathered broken parts from the retired golems avoiding the flashier components popular among other creators.

After going through the dump of unwanted parts he created Blitzcrank hoping that the golem would quickly eradicate all waste. Viktor told Blitzcrank about his idea of helping people and he gave the sentient golem a resilient desire to serve the people of Zaun by removing the toxins in their path.

The golem took Viktors ideology believing self sacrifice and altruism could lead to greatness of the entire city. He joined the other machines in their cleanup program going far beyond the usual areas of pollution. He fearlessly cleansed toxic neighborhoods from the most dangerous chemical spills without the need to return to the college for repairs. He developed ambitious plans for his crew of golems but he found his own design was limited to only cleaning chemical spills. One night he borrowed Viktor’s tools and he wrenched open his own steam engine. He configured his mechanics to remove all limits to his function so he could make an even greater difference in the city.

In the following weeks he orchestrated evacuations across entire neighborhoods to help people avoid the toxic fumes. Then he redistributed the food distribution system to increase its efficiency and he repaired the filtering system to dispose of clean water to the community well.

With every good deed Blitzcrank’s sense of his own purpose solidified and he gained consciousness that no other golem had yet achieved. Viktor noticed the unusual changes in his creation and he wanted to replicate Blitzcrank’s profound sentience and self-sufficiency in other machines. Blitzcrank never revealed what caused him to awaken so he started roaming the streets refusing to rest when there might be people in need of his help.

No task was too hard for Blitzcrank, he stopped robberies, saved people from fires, returned lost animals as time passed he learned that several of the people he saved became ill due to the exposure to the toxic chemicals. He turned to his creator for help and Viktor who wanted to evolve humans beyond immortality was eager to assist. Unfortunately the family they tried to help died before the cure was made, saddened by their death and his inability to save them made him realise this wasn’t his way of helping people and parted with his creator as a friend and pier.

Even though Zaun was viewed as a place of caos, Blitzcrank sees only its infinite possibilities, he now searches Zaun looking for ways to create changes for good paying extra attention to those forgotten by society. He believes that, with a bit of help, Zaun will grow into the greatest city Veloran has ever seen.

Blitzcrank is a utility-based League of Legens champion, picking off enemies using their “Rocket Grab” and locking them down for easy kills. This champion is usually played as a bot lane support because of their impressive utility, though they’re sometimes played on top lane.

Here’s a closer look at each of Blitzcrank’s unique skills and abilities:

Mana Barrier lets Blitzcrank gain a shield based on their mana when dropping too low health—providing a moderate safety net against physical and magic damage. When it’s active, it lets Blitzcrank make riskier moves, so don’t hesitate to attack enemies, especially early on in the game when opponents have difficulty breaking the shield.

However, remember that the Mana Barrier can scale off your current mana, so use it conservatively, or it’ll unlikely save you from any trouble.

Blitzcrank will fire their right hand to grab an enemy on its path, dealing moderate damage and dragging it back to them. This attack makes Blitzcrank an excellent champion for early invaders, quickly catching people in narrow pathways.

Blitzcrank will “supercharge” themselves to get a boost in movement and attack speed, but he’ll be temporarily slowed down after Overdrive ends. Using this attack to close the distance on enemy forces makes it easier to land Blitzcrank’s abilities. Like any other speed boost move, you can use Overdrive to run away from opponents.

This active attack is when Blitzcrank charges up their fist to make their next attack inflict double the damage while popping their target up mid-air. This attack resets their auto-attack timer, which you can use quickly from their basic attack—delivering a fast amount of damage.

Plus, you can activate Power Fist before Rocket Grab is fired, keeping enemies in place after the hook ends.

The enemies attacked by Blitzcrank will get marked and receive lighting damage after a second. They can activate this ability to nullify nearby enemy shields, damage, or altogether remove them. Entering combat against an enemy unit will trigger the passive damage of Static Field, hitting targets automatically.

Additionally, in a prolonged 1v1 against a champion without any minions or monsters in the surroundings, it’s best to allow Static Field’s passive attack the enemy instead of activating it. That’s because its passive damage is higher than the active damage after three strikes.

Blitzcrank was designed to be a “top laner,” making their damage higher than most tank and fighter classes—leading to an offensive playstyle that focuses on killing enemy bot lanes and snowballing from there. When playing as this champion, you need to be agile and intuitive to overcome Blitzcrank’s moderately complex fighting style.

Here are tips and tricks to help you take advantage of Blitzcrank’s strength and toughness, bringing your team to victory.

Read about another League of Legends champions, IRELIA.