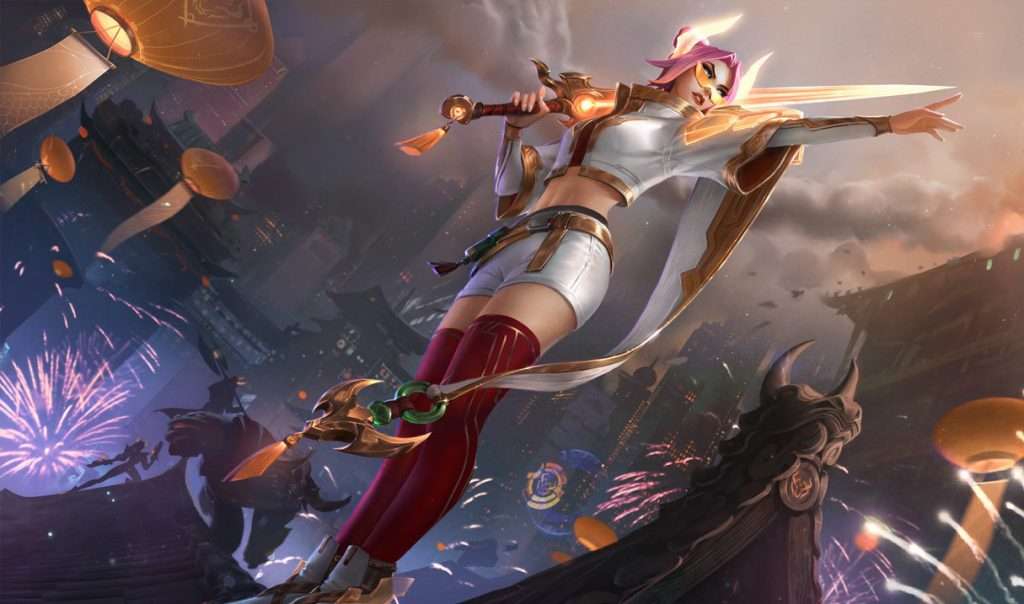 Fiora is one of the best champions in the top lane and can deal heaps of damage when used right. Also known as the Grand Duelist, Fiora possesses the tools to outplay and counter most champions.

With her swift movements and deadly damage, Fiora has become one of the most feared duelists in Valoran. Fiora is renowned for her strength and intelligence as she is for her legendary blue steel rapier’s speed.

Fiora was born to House Laurent in the Demacia kingdom, where she shortly took control of the family from her father in a scandal that almost destroyed their reputation.

Now, Fiora is doing all she can to restore her family’s honor and bring them back to their rightful place in Demacia.

Fiora is one of the best and most feared duelists in Valoran, renowned for her curt manner and cunning mind, wielding the famous blue steel rapier.

She was born to the prestigious Laurent household in the Demacia kingdom. Fiora strived for perfection in all things, brooking no insult to her honor or that of her family’s.

But from an early age, Fiora already defied all expectations placed upon her, where she forced her brother to give her lessons in using the rapier in secret.

As she grew up and several political issues of being a noble have started to taint her family’s name, Fiora took over her family’s household—just right before a scandal nearly destroyed them.

Although House Laurent’s reputation was sundered, the Grand Duelist bends all her efforts to restore her family’s honor and bring back the riches they once had

Now, Fiora plans to return her family to their rightful place in Demacia her way.

Fiora is a potent champion and is one of the best for Top Lane gameplay. She has a relatively simple kit but possesses a high skill ceiling requiring a fair amount of thought to get the most out of her playstyle.

Fiora is all about positioning, striking enemy forces in “key” locations, and when successful, you’ll be able to clean up against multiple enemies at impressive speed.

Here’s a closer look at Fiora’s skills and abilities:

Duelist’s Dance is Fiora’s innate or passive attack. It allows Fiora to identify the Vitals of any nearby enemy champions, marking an arch around them.

Vitals will take 0.5 seconds to identify enemy units and usually lingers for 15 seconds. After at least one Vital gets triggered or time out, Fiora will locate a new one on her target.

It also heals Fiora and grants her bonus movement speed that decays in 1.75 seconds.

Lunge lets Fiora dash for a short distance in a target direction, where she’ll then stab a nearby enemy unit. When you successfully hit an enemy, it will reduce this skill’s cooldown by 60%.

This skill is where Fiora poises to strike her blade in a target direction while becoming immune to non-turret damage and gaining crowd control and debuff immunity. However, during this, Fiora will be immobile.

Fiora will stab her sword forward after the poise, dealing magic damage to enemies within a straight line.

The first enemy champion hit by this attack is slowed down and crippled for 1.5 seconds. If Fiora manages to dodge an immobilizing effect, Riposte will stun instead of applying a slow.

Bladework is an active attack that gives Fiora’s subsequent two basic attacks within 14 seconds a bonus of 175 attack range and a 50% attack speed boost.

However, Fiora’s first basic attack can’t critically strike, but it can slow targets by 30% for one second. Meanwhile, the second attack is always guaranteed to inflict a critical strike for enhanced damage.

Active: When activated, Fiora will challenge a target enemy champion for 8 seconds, highlighting their four Vitals, creating an area around them. While in effect, Duelist’s Dance doesn’t identify new Vitals on her target.

If Fiora hits at least one Vital before her target dies or if Fiora hits all Vitals, she’ll create a Victory Zone. In this zone, all allied champions can get healed for 2 to 5 seconds depending on how many Vitals Fiora managed to hit.

Fiora is one of the ‘easiest’ champions in download of League of Legends to use. However, her playstyle needs more macro knowledge and execution, meaning you need to collaborate with your team to win.

Here are tips and tricks to help you play Fiora like a pro:

Read about AATROX LOL next!