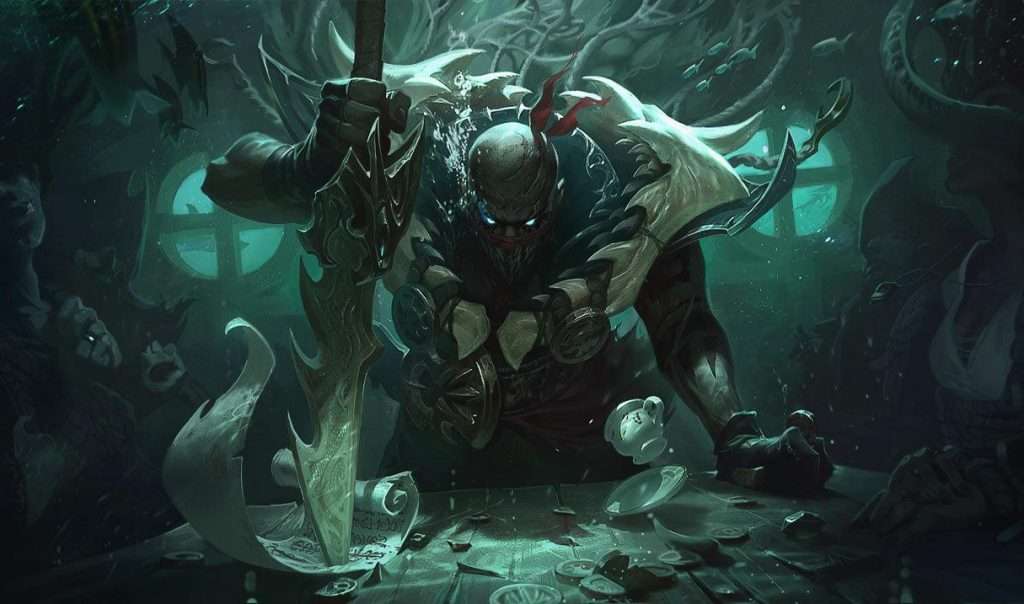 In Bilgewater, residents dragged out monstrous creatures of the deep for the butcheries that lined the waterfront. The Bilgewater tide was not strong enough to wash away the red slick that constantly flowed down its wooden slips. One of the avid workers in the district of Bloodharbor was Pyke.

Pyke was a known harpooner and called the Bloodharbor ripper. He returned from his supposed death in the belly of a gigantic jaull fish.

Pyke started on the slaughter docks. He became familiar with the trade, which included the gruesome work and the meager paychecks. He was able to witness heavy purses of gold being handed to captains and crews in exchange for formidable carcasses that he and his fellow workers would chop into marketable chunks. Pyke was hungry for more than a few pieces of copper in his pocket and managed to talk his way onto the ship’s crew. Few individuals tried to hunt in the mythical Serpent Isles manner. It is the way where they were lancing themselves at targets to secure tow-hooks and start to butcher the creatures while alive. Pyke was known to be fearless and highly skilled in this field and made a name for himself as the best harpooner a fishing boat could have. He knew that meat was more expensive than certain organs from the larger and more dangerous beasts, which needed to be harvested fresh.

Each sea monster had its respective price, but it was commonly based on the difficulty of the hunt. But the most desired by Bilgewater traders was the jaull-fish. It has a razor-toothed maw, a priceless sac of sapphilite, which were envied across Runeterra for several sorcerous distillations, and a little flask of gleaming blue oil could pay for a ship including its crew, ten times over. While hunting with an untested captain, Pyke learned that a life of blood and guts would land him the riches he desired.

On their way to their journey, a huge jaull-fish appeared to them, opening its maw wide enough to reveal its rows of sapphilite sacs. They were able to secure the beast with harpoon lines. Although it was bigger and older than those Pyke had encountered, he didn’t hesitate to jump into its mouth. As he was in the mouth of the creature, a deep vibration began to stir in its cavernous gullet. Then on the ocean’s surface broke some roiling bubbles where an entire pod of jaulls began to push against the fettered ship’s frame. The captain was shocked and panicked until he cut Pyke’s lifeline. The last thing Pyke saw before the beast snapped shut its jaw was the look of horror on the faces of his crewmates watching him being swallowed by the beast alive.

But it was not the end for Pyke. In the deepest of the unknown ocean, crushed by the titanic pressure, still trapped inside the jaull’s mouth, Pyke opened his eyes again. He saw blue lights everywhere, looking like thousands of eyes were watching him. There were fearful echoes of something old and mysterious that filled his brain. It was breaking his mind, showing him flashes of everything he had lost. A new hunger took over him. He craved vengeance and retribution, thoughts of filling the depth with corpses of those who wronged him were on his mind.

Bilgewater was a place where the red tide was nothing new, but no one had thought much of the killings. However, weeks and later months became a pattern, and captains from many ships were carved and left out for the dawn. People in the barrooms believed that it was a supernatural killer, aggrieved at sea and making its way through the crew manifest of a cursed ship called the Terror. Once a way to respect and be marked a celebrity, asking “You a captain” became a cause for alarm.

Soon the first mates, caulkers, merchant officers, and bankers, too, and all those associated with the bloody business of the slaughter docks. A new name later went up on the bounty boards, a thousand Kraken for the infamous Bloodharbor Ripper.

Driven by the twisted memories created by the deep, even though no one ever mentioned the ship named the Terror, Pyke succeeded in inflicting fear into the hearts of dishonest businessmen, killers, and seafaring villains.

A monster is now hunting a city that once prides itself on killing monsters, and Pyke has no intention of stopping.

Pyke is a champion from League of Legends.

Pyke was cursed for an unknown crime and sent to the Shadow Isles where he became entangled in a web of frightful magic, charges with monstrous power. For untold generations, he languished beneath the surface, his soul crying out in loneliness until some other would listen.

What type of character is Pyke?

Pyke is the Bloodharbor Ripper, hell-bent on murdering his targets and eradicating evidence that would incriminate him in the process. He’s a man of few words but many knives.

What does Pyke do?

His main job is to assassinate people with his harpoon and choke them out with chains so he can kill them easily, this is called the skill shot . He also has a lot of burst damage with his abilities which allows for him to burst down tanky enemies as well as squishy ones.

What are pyke's abilities?

Pyke’s abilities are called Death from Below, Bone Skewer, Phanton Undertow , and Curse of the Drowned.

What is Pyke's background?

Pyke is a ruthless assassin who prides himself on recovering stolen goods, even if it means killing their owners.