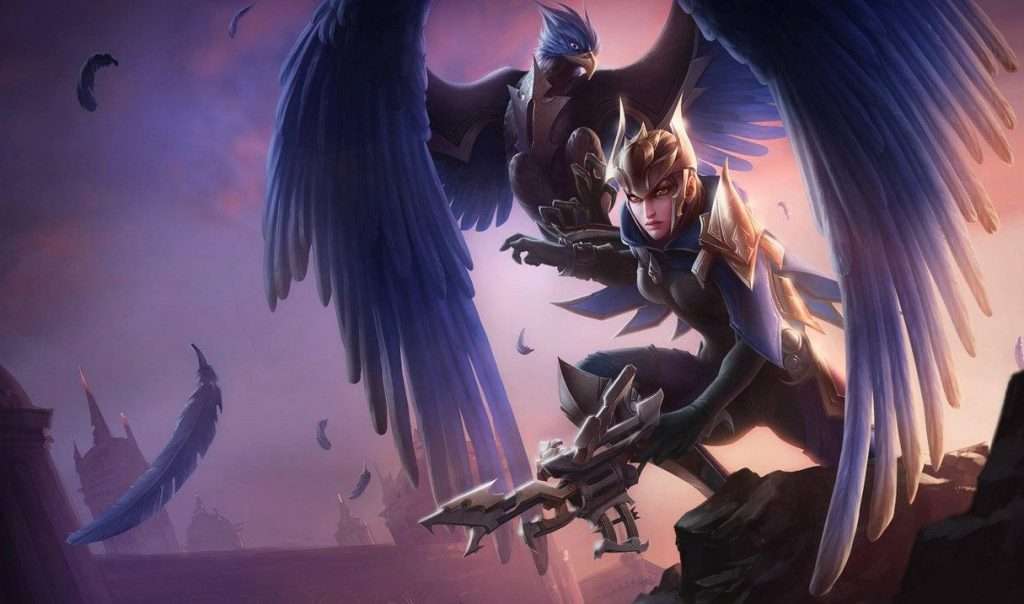 Uwendale was a remote mountain village in northeastern Demacia. Living in the village are thriving hunters and farmers protected by the rangers who patrolled the wilderness and drove away any harmful creatures strolling down from the high peaks. Quinn, with her twin brother Caleb, were among the rangers of Demacia.

Quinn is an elite ranger and knight of Demacia who had gone through various dangerous missions in the enemy territory. She fought with her mythical eagle Valor, with whom she had made an unbreakable bond. Their enemies were often slain before they would even realize they were fighting with not only one but two of the kingdom’s greatest heroes. Quinn aimed with her crossbow while Valor marked their elusive targets from above. Nimble and acrobatic, they made a deadly pair on the battlefield.

Quinn and Caleb, her twin brother, were born and lived in Uwendale. When they were little, King Jarvan III came to Uwendale on a tour of his kingdom. The twins were thrilled at the pageantry of the knights in the king’s entourage, resplendent in their shining armor. The twin’s father was a weaponsmith in their village, and he was fascinated by them pretending to defend their land themselves bravely. He decided to fashion simple weapons for them to play with.

However, as they grew, they spent most of their time outdoors with their mother, a warden among the local rangers. She taught and trained them to survive in the wilds, track the beasts, and, most importantly, how to fight. They became a formidable team, she, who had keen eyes for trails, an expert in luring their prey, her excellent bow skills, and her experiences in hunting a spear. But, one expedition ended in tragedy.

Known to be reliable rangers for Uwendale, Quinn and Caleb were hired to look after a party of nobles from the capital as they hunted a giant tuskvore. A tuskvore was a predator famous for its thick hide, ferocious temperament, and long horns. Despite their skills, they failed to kill the creature right away, and the wounded beast turned on them. Although they were quick to cut in with Caleb’s spear hitting one of the beast’s eyes and Quinn driving off the tuskvore with her arrows, it was late, and its deadly horns gored Caleb.

Lord Barrett Buvelle was the head of the party and the one who assisted Quinn to bury her brother where he had died. Her brother’s death had crushed her. She had a hard time moving on, and when she returned to the gravesite, the joy she felt as a ranger began to fade. Her prowess in the wilderness disappeared, and she began making mistakes, such as missing easy tracks and her aims were off.

A few months had passed, and Lady Lestara Buvelle visited Quinn’s family. She was thankful that Quinn saved her husband and asked her how she could repay them. Because she couldn’t think of anything, she only thanked the Lady and respectfully turned her away.

A year later, after Caleb’s death, she visited his grave as she often did. Feeling astray and disoriented due to grief, she didn’t notice the coming tuskvore. Its one eye injury identified it as the very beast that had slaughtered her brother. The monster charged. Even Quinn was firing arrow after arrow, without any effect and she knew it was her possible end. Right then, a majestic bird plunged in, an azurite eagle, which was a breed that was thought to be extinct. Its talons and beak cut bloody gouges opposite the tuskvore’s face. However, the creature is strong, and its horns tore into the bird’s wing.

As the monster charged Quinn again, she fired the last arrow aiming its gullet. The shaft flew right into the tuskvore, bringing the creature down in a heartbeat. Although the eagle was wounded, she approached it with caution. The bird has been known as dangerous and untamable hunters, but she saw a deep well of kinship in his eyes. Quinn bound the bird’s broken pinion, and she brought him back to Uwendale. She named the eagle Valor, and the bond they have established between them rekindled the fire in Quinn’s heart. Once more, she made up her mind to serve Demacia in battle as a knight.

Quinn’s mother reminded her that it exceeded their family’s small means; it would require sponsorship. So her father encouraged her to find Lady Buvelle, who had offered compensation for service to her affluent family in the capital. Her father helped her craft a new weapon worthy of a knight, a fine repeater crossbow that can fire multiple bolts with a single pull of the trigger. So Quinn, together with Valor, set out for the Great City.

Lestara Buvelle gladly backed up for Quinn, even visiting the High Marshal Tianna Crownguard to appeal for her. In just a week, Quinn took her oath as a ranger-knight of Demacia.

Having brought fame to the rangers of Uwendale, she preferred to stay out in hinterlands instead of staying within the walls of the outlying towns. With all the rangers reporting to Quinn, she rarely pulled rank with them. Instead, she gave way to their specialized skills and experience in the field, a stark contrast to the rigid hierarchy of the rest of the military.

Quinn and Valor have explored far and wide in the service of Demacia. With each mission, their unique bond had helped secure the kingdom’s borders for more generations to come.

Quinn calls Valor to mark an enemy and reduce their vision before damaging all enemies.

It grants Quinn attack and movement speed after attacking a Vulnerable target. It activates Valor to reveal a large area nearby.

Quinn dashes to an enemy, dealing physical damage and slowing down the target’s movement speed. She leaps off as she approaches the target, briefly interrupting it, and lands near her maximum attack range away from the target.

Quinn and Valor team up to fly around at significant speed, ending the ability to cast Skystrike and dealing damage to nearby enemies and marking champions as Vulnerable.

What is relation between Quinn and Valor?

Valor is a unique ranger-knight who undertakes dangerous missions deep in enemy territory with his legendary eagle, Quinn. Their bond is unbreakable and uniquely deadly, and their foes are often slain before they realize that they’re fighting not one, but two Demacian heroes.

Quinn is terrible because she only has 1 ability that needs to be manually charged, and it casts quickly so you can re-use it easily – so players who aren’t great at manual aim don’t have much to worry about with this character.

Why is it hard to play as Quinn?

Ezreal has a lot of skills which all do different things and require accuracy whereas, as noted above, Quinn just has one single skill that doesn’t need accuracy

What's the difference between playing Quinn and playing Ezreal?

The difference between playing Quinn and playing Ezreal is simply whether or not the player wants to play a character who relies on just automatically charging and using an attack spell for early game damage (Quinn) or someone who relies on mixing skills together for various effects (Ezreal). Some people may find real harder to play, but ultimately in either case it comes down to whether the player feels comfortable using abilities in combination with one another.