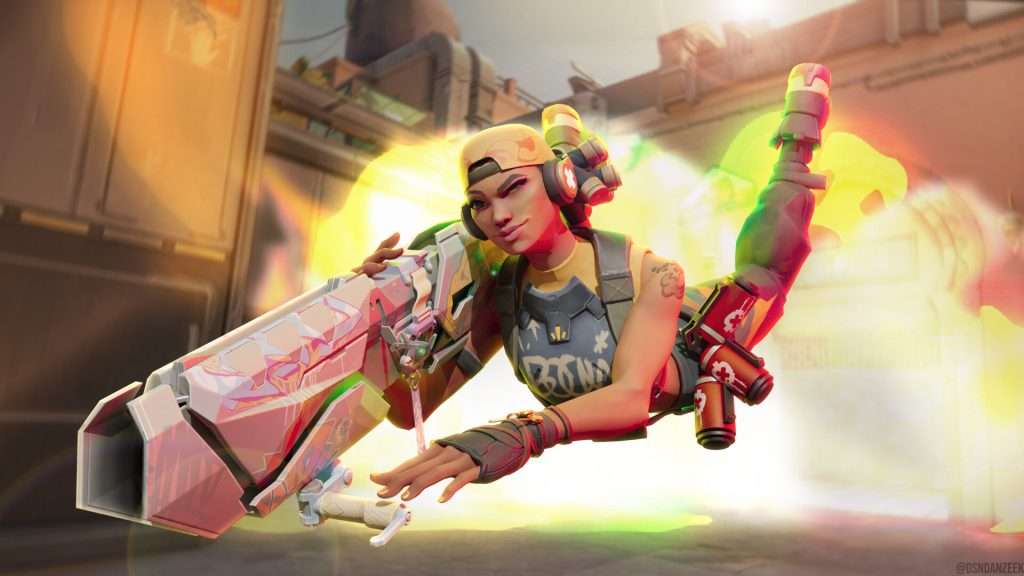 Raze is a VALORANT agent who specializes in mines, grenades, and general explosions. Raze is all about causing AOE damage to foes, and he’ll be a sought-after agent for players who like mayhem and confusion.

Raze comes from Brazil with her large personality and big weapons. With her blunt-force-trauma playstyle, she excels at flushing entrenched foes and clearing tight areas with a generous amount of “boom.”

While Valorant was in closed beta, a new character named Raze made her debut. She is an offence-minded player but she can do some scouting as well. Her skills include Boon Bot, Paint Shells, Bum Bot and Showstopper. Boom Bot is a cluster grenade for area of effect damage. Paint Shells are grenades that serve as cluster bombs, spreading further damage to enemies in a radius around each other. Bum Bot is an explosive reconnaissance drone and Raze’s third ability. Raze’s ultimate is the Showstopper, which is a devastating rocket launcher that does significant damage to an area it hits..

Raze has no skills that limit the view of opponents (like walls) or any kind of smoke screen. Her only crowd control ability is a the Blast Pack C4 charge, which has a moderate chance of stunning a target.

Raze is a very aggressive playstyle when compared to other VALORANT agents, because the majority of her abilities are oriented on mobility and damage rather than intelligence gathering or support. She’s a specialists who excels at dealing damage. She is one of the few agents where most of her abilities are designed to inflict damage, notably Paint Shells and Showstopper. Her skillset has been a source of criticism in the Valorant gaming community.

Raze is always cheerful, impulsive, and spontaneous. She exudes chaotic energy and destroys every obstacle in her path, generating mayhem on the battlefield. She can be impatient and doesn’t adhere to plans.

Raze’s signature abilities are Blast Pack and Boom Bot, both of which melt the opposing team. Blast Pack can stick to walls and be detonated on demand, while Boom Bot is an auto-lock Bot that chases foes and detonates if it catches up to them, making it perfect for putting pressure on opponents while also causing a lot of damage. Paint Shells is a more direct damage grenade-throwing ability from Raze, which splits into four smaller grenades after being thrown that also deal significant damage, making it an excellent space creator. And if someone survives Raze’s attack on the field, Showstopper, the ultimate power, does just that — it kills everyone.

How To Play Raze

INSTANTLY, throw a Blast Pack to adhere to surfaces. After deployment, RE-USE the ability again to detonate and damage anything hit. This power isn’t harmful to Raze, but he will still fall if he is sent up too far.

Although the C4 explosion cannot harm Raze, it may blow her back and you can use the explosive force to your benefit. You may use this technique and set up the Blast Pack in an appropriate location to propel Raze upwards or forward. This enables you to leap onto high spots like walls, and windows.

A cluster grenade may be equipped. To throw the grenade, use FIRE, which causes damage and produces cluster elements that do damage to anyone in their radius.

Raze throws a Paint Shell which can bounce off of walls. After a short time the grenade erupts into a massive blast, then divides into smaller explosives, each one causing area of effect damage. Targets who are close to the explosion may be severely hurt.

Paint Shells is highly damaging that may be used effectively if utilized correctly. The greatest impact can be seen in tight spaces, corridors, or alleys. In such a situation, the opponent has far less space to move around and receives considerably more damage compared open areas.

Once you’ve equipped your Boom Bot, it’ll be able to follow you on the ground and shoot rockets at nearby targets. The bot will be deployed, causing it to travel in a straight line on the ground, bouncing off walls. The Boom Bot will lock onto any foes within its front cone and pursue them, exploding for significant damage if it reaches them.

Bum Bot is a reconnaissance drone that Raze uses. When the ability is activated, Raze can let it loose in any direction. The skill only works in one direction; it cannot change direction. The drone scans for a set length of time, detecting all targets in front of it. Use your unique Bum Bot drone to scout the region before going into an uncharted room or leaning around a corner.

Please keep in mind that the Bum Bot has restricted mobility and can only move forward. It can, however, bounce off of walls. A drone may become trapped in a small passageway and fail to accomplish its objective occasionally due to various circumstances.

Equipping a rocket launcher is required. A rocket is launched that does huge area damage when it comes into contact with anything.

Raze uses her rocket launcher to fire a missile that explodes causing large damage. Use the ability, trigger the missile, and you have ten to eleven seconds to launch the missile. Unlike C4 explosions, Showstopper can harm Raze.

The Showstopper is useful in a variety of circumstances, such as when you’re taking control of a bomb site and want to eliminate players behind a wall or blow up someone disarming an explosive. The Showstopper may be utilized to counter an opponent who is hiding in a narrow passageway or a confined space. The blast radius is so wide that it might harm several of your foes.