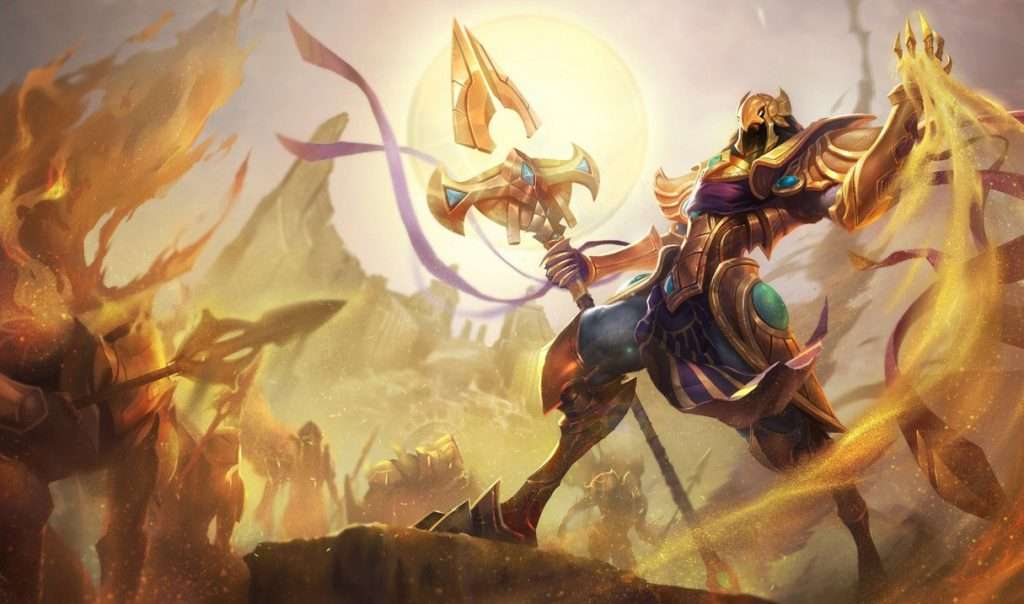 The mage class in League of Legends downloads  specializes in magic damage, typically burst damage, casting spells to create powerful combos to win fights from afar. Among the best is Azir, a mighty Ascended warrior that has been around for thousands of years.

Azir was previously a mortal emperor of the once-great realm of Shurima, standing proudly at the cusp of immortality. He is a mage who summons fallen Shuriman sand soldiers to fight his enemies, taking control of the battlefield from a long distance.

However, Azir’s hubris saw him betrayed and murdered during the moment of his greatest triumph. However, thousands of years later, Azir has been reborn as an Ascended warrior full of immense power.

With Shurima risen from the sand, Azir aims to restore this once-great realm to its former glory—and do his duty as emperor and lead his people to victory.

Thousands of years ago, the Shuriman empire was a sprawling realm of vassal states conquered by powerful armies led by all but invincible warriors known as the Ascended. Among the emperor candidates was the youngest son of the emperor, Azir.

He spent most of his time in the Great Library of Nasus rather than training to fight under the stern tutelage of the Ascended hero, Renekton.

He befriended a slave boy who visited the library to get books desired by his master. Slaves in Shurima were forbidden to take names but Azir broke this law and named his slave friend Xerath.

Every year, the emperor’s family went on a trip around the empire. One night, Azir and Xerath snuck out into the desert to draw the stars and add them to the library’s collection, that same night assassins attacked the royale caravan and found Azir and Xerath in the desert. Xerath jumped on the assassins’ back, saving Azir and buying him enough time to pull out his dagger and kill the assassin.

When they returned to the caravan they found all the assassins lying dead on the floor, slain by Renekton who protected the emperor. Azir’s brothers weren’t of such luck as they were all slain by the assassins.

Azir told his father how Xerath saved his life and wanted to award him for the courage. But his father looked upon slaves as slaves and ignored him. On that day Azir swore to Xerath that one day the two of them will be brothers.

The emperor began his campaign of bloodshed to kill the traitors who sent the assassins. For the next few years the emperor was consumed by paranoia and even Azir’s life hung by a thread. His father hated him and wished that he died instead of his brothers. He knew the queen was still young enough to bear more sons. The attack in the Oasis showed how week he was and started training under Renekton.

He learned how to use swords and spears and even how to command his warriors. He elevated Xerath as his right hand. The queen was incapable of bearing a healthy child, and all of them died shortly after birth. Some said that the queen was cursed and some said it was Azir’s doing. Of course Azir was proven innocent each time and those who accused him of such things were executed. This meant that Azir’s life was not in danger from his father as he was his only hair to the throne.

The queen finally bore a healthy child but the night that it was born a storm struck Shurima and lightning bolts struck again and again into the queen’s chamber where both her and the newborn child were killed. There were rumors that upon hearing the news the emperor went mad and took his own life but those rumours were fast proven wrong when the bodies of the emperor’s guards and the emperor himself were found torn apart and schoarced.

Azir took control of Shurima, expanded the borders and ruled with a harsh but just hand. He began working on a new law which would make the lives of his slaves better and eventually freed.

Soon Azir announced that he will take the ascension ritual and take his place next to Nasus and Renekton. Many were sceptical about this decision since the sun priests were the ones that decided who would have been ascended not the emperor himself. But Azir’s arrogance grew along with his new empire and those who disagreed were punished by death.

Azir climbed to the Sun Disk and before the sun priests started with the ritual he turned to Xerath freed him and not just Xerath, he freed all of the slaves in Shurima. He embraced Xerath and named him his eternal brother. Azir was unaware that Xerath learned the dark arts of sorcery. Xerath in the middle of the ritual unleashed his power and blew Azir away into the sun which burned him up. Xerath took his place in the ritual but it failed as it wasn’t meant for Xerath. It backfired and it caused a huge wave of energy which scorched everything, its people and its towering palaces, even the Sun Disk sank from the sky. What took centuries of building was taken down in an instant by one man’s ambition and one man’s misplaced hate.

Thousands of years both Azir and his City got a second chance. With Azir rising as an ascendent warrior.

Azir is one of the hardest champions to master. He’s a three-mana Ascended champion and fights long-distance, sending minions to battle. Azir reaches level two after summoning ten sand soldiers.

This passive attack is where Azir summons the Disc of the Sun from the ruins of allied or enemy turrets, inflicting magic damage along the way.

Azir sends all his soldiers toward a target location, dealing 60 to 140 magic damage to enemies they pass through while applying a slow effect that lasts for one second. Any enemy hit by several sand soldiers won’t take additional damage.

Meanwhile, the active version of Arise is where Azir summons a soldier that enemies can’t aim at, toward the target location, attacking an enemy in a soldier’s range and dealing 60 to 160 magic damage to all opponents in a line for 10 seconds. Several sand soldiers can strike the same target, with each one beyond the first dealing 25% magic damage.

However, this expires twice as quickly while within the range of an enemy turret and instantly expires if Azir isn’t in control range. After all, Azir can only command soldiers when near them. These soldiers can’t attack enemy structures, trinkets, traps, and wards.

Azir will shield himself briefly (for 1.5 seconds) and dashes to one of his soldiers, dealing 60 to 180 magic damage to opponents while blocking up to 80 and 240 damage along the process. Whenever he hits an enemy champion while under Shifting Sands, Azir will instantly create a new sand soldier to deploy and stop his dash.

This active attack is where Azir summons a wall of armored soldiers charging forward, knocking back and inflicting 150 to 250 magic damage to enemies. After the initial hit, the soldiers will stay as a wall for 3 seconds. When Emperor’s Divide is active, Azir, alongside his team, can freely pass through it as it doesn’t get affected by Azir’s basic attacks and spells.

As seen in Azir’s Abilities, He is one of the best champions in League of Legends when it comes to fighting in one physical location, giving him enough area to order his sand soldiers around and dispatch them from a safe distance.

Here are tips and tricks to help you maximize Azir’s skills and abilities.