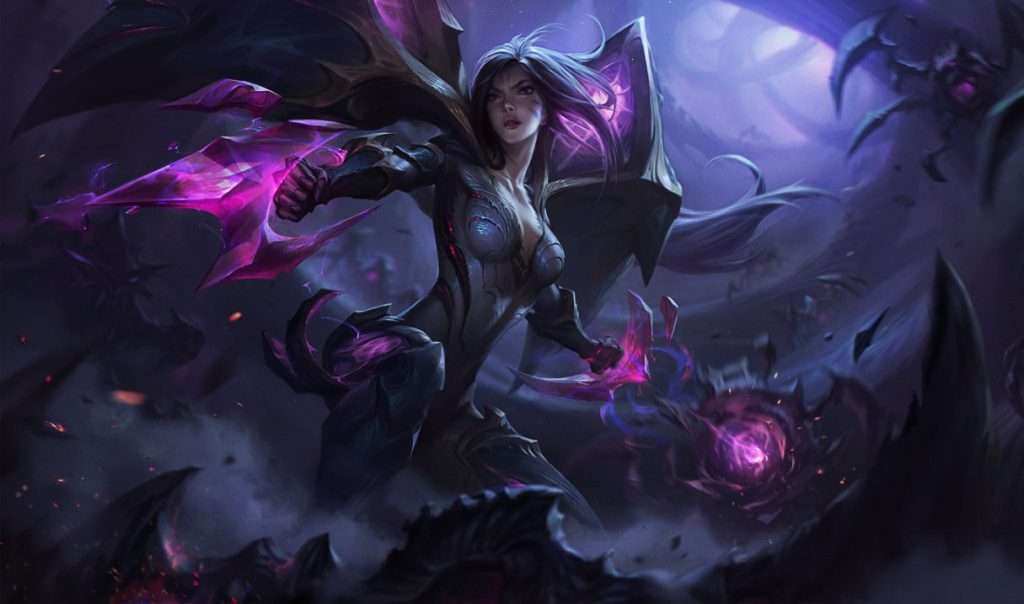 Kai’Sai is the daughter of the Void, and she’s a Marksman and Assassin class, making her one of the moderately tricky champions to master in League of Legends.

She can deal heavy damage by diving into the foe’s backline, and she’s capable of firing at long ranges without issues and becoming invisible.

To survive against predators in the Void, Kai’Sa became one. She was stranded for years with no hope of rescue, enduring all her hardships through determination and powerful second skin adapted from a living Void creature.

Now, Kai’Sa emerges as an apex hunter, torn between her two worlds—the one that birthed her and made her.

Kai’Sa, claimed by the Void when she was young, managed to survive through determination and strength. Her experiences have made her a deadly hunter.

Meanwhile, to some, Kai’Sa was the harbinger of a future they’d rather not live to see. Despite her fears, Kai’Sa fought her way through the Void. She was transformed from a frightened girl to a fearless survivor.

For nearly a decade, Kai’Sa lived between two worlds to keep them apart—the Void’s Hunger to consume the scattered villages of Shurima and all of Runeterra. Kai’Sa won’t allow that to happen.

Although Kai’Sa has slain thousands of Void-constructs, she knows that most of the people she protects perceive her as a monster.

However, Kai’Sa paid no heed as now—she had more than hope—she had a plan.

Fight hard, stay alive, and find a way back, no longer as Kaisa—but Kai’Sa.

Playing Kai’Sa labels you as a threat that’s never too far from the enemy, hunting down foes and diving into danger to defeat her enemies—emerging as the sole survivor.

Let’s take a closer look at Kai’Sa’s unique set of skills and abilities:

Kai’Sa’s attack and Void Seeker against enemy units with four plasma rupture them, consuming them to inflict an additional 15% of the target’s missing health bonus magic damage.

Living Weapon: When Kai’Sa successfully gains a set amount of permanent stats from items and stat growth, she can evolve her abilities. Every ability is tied to one specific stat from items.

However, the upgrade is lost if the stat requirement isn’t met.

Icathian Rain: When casting Icathian Rain, Kai’Sa will release a swarm of six missiles evenly distributed among nearby visible enemy units, each one hitting their target—dealing physical damage.

Enemy minions with 35% health or below take double damage from Icathian Rain. Meanwhile, enemy monsters take 25% damage from missiles beyond their first.

Living Weapon: This requires 66 to 100 attack damage from items to upgrade. Icathian Tain fires 12 missiles instead of 6.

You can only activate this ability when there’s an enemy near Kai’Sa.

Void Seeker: When activated, Kai’Sa will fire a void blast in a target location, granting her sight of the surroundings as it travels further—stopping at the first enemy contact.

Living Weapon: This requires 100 ability power from items to level it up. Void Seeker can apply three plasma instead, refunding around 70% of its cooldown if it hits enemy champions.

SuperCharge: Kai’Sa will charge for the entire duration of SuperCharge’s cast time, where she’s still allowed to move. Additionally, Kai’Sa will become ghosted and gain bonus movement speed, around 0% to 100%, while SuperCharge is in place.

After charging up SuperCharge, Kai’Sa will gain bonus attack speed and reduce her basic attack’s windup percentage to 6.44% over 4 seconds. Each basic attack reduces cooldown of this ability by 0.5 seconds.

Living Weapon: This requires 70% to 100% attack speed from items to upgrades, where SuperCharge grants Kai’Sa invisibility for 0.5 seconds.

Killer Instinct: When activated, Killer Instinct lets Kai’Sa instantly shield herself for 2 seconds while swiftly dashing to a target direction near a visible enemy champion affected by her Plasma stacks.

Additionally, Kai’Sa can cast her other abilities when Killer Instinct is in effect.

Kai’Sa is one of the most lethal marksmen in the game. So, you’ll want to build up and maximize her Attack Damage as much as possible.

Here are some tips and tricks to help you become more successful when playing as Kai’Sa in League of Legends (Check out LOL Buff here):

You can check out AZIR next!