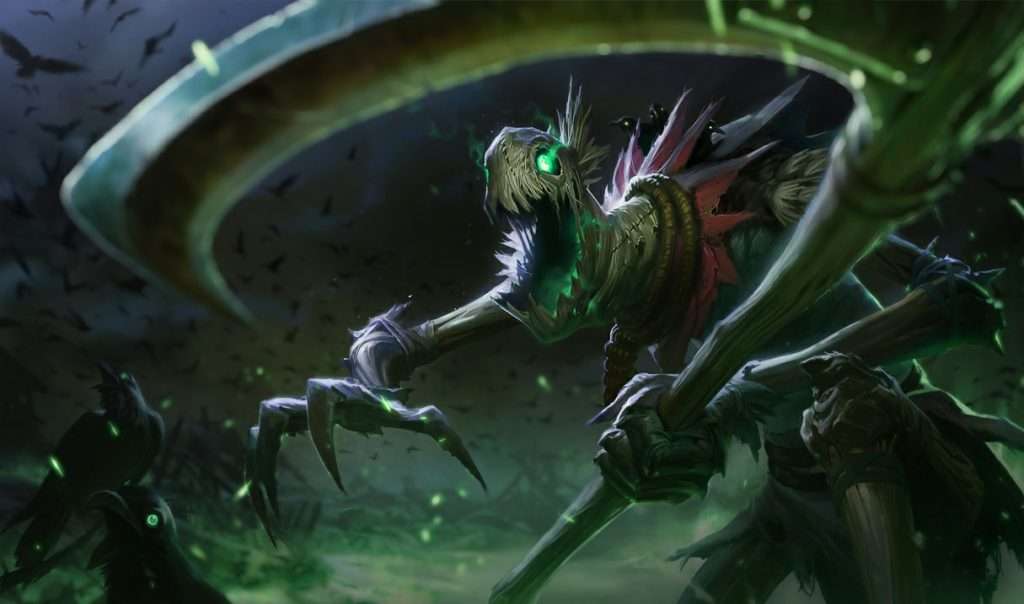 In LOL, specialists consist of various champions who don’t necessarily fit into a “neat box” regarding class and subclass specifications. One unique champion in this class is Fiddlesticks.

Fiddlesticks is a ghastly and sentient scarecrow that likes stalking its enemies in the darkness using a scythe and preying upon the unsuspecting.

It’s an abomination  that was once a lonely man, and now stalks the darkness. He was accused of bringing famine to his village, where villagers tied him up to starve in his barren field.

After the man died, he was resurrected by a group of crows feeding on his remains.

Now, Fiddlesticks relishes terrorizing his victims before killing them with the help of his savage crows.

Fiddlesticks is a primordial entity, predating the rise of civilization. It built its body out of random items, piecing itself together into a strange shape no human would understand.

Fiddlesticks is an entity made from pure emotional instinct originating from the formless negative energy present in all life. It stalks the edges of society, going to areas thick with paranoia where it feeds upon terrorized victims.

Fiddlesticks wields a jagged scythe, reaping fear itself from its victims. If any victims survive, it shatters their minds, rendering them useless for the rest of their lives.

It is aided by a savage murder of crows, terrorizing its victims before claiming their lives.

Fiddlesticks’s new kit is impressive, all while keeping its story and core. Its old passive, which offered bonus movement speed whenever it didn’t move, will now be active, replacing its trinket.

Here’s a closer look at Fiddlesticks’s unique skills and abilities:

Scarecrow Effigy: Fiddlesticks starts the game with a Scarecrow Effigy, a skill that permanently occupies the trinket slot. It can pretend to be an “Effigy” by standing still and not moving for 2 seconds.

When it’s not moving or being acted upon for the set time, it adjusts its body into a scarecrow, extending its arm out to expose its lantern.

Harmless Scarecrow: When Fiddlesticks reaches level 6 and beyond, placing an Effigy will summon a demonic eyeball at the location. This ability grants obscured vision of enemy units that aren’t visible in the area for six seconds.

Besides that, Harmless Scarecrow can disable enemy wards and stealth traps.

Passive: If Fiddlesticks is out of combat for at least 2.5 seconds and isn’t visible to the enemy, its next damaging ability will cause all targets struck to flee for a certain period.

Targets who received the fear status will get placed on a cooldown similar to Terrify’s cooldown, during which enemies can’t be “feared” by it again.

Active: This is when Fiddlesticks screeches at the target enemy, inflicting magic damage while causing them to flee for a certain period. However, this will have a minimum damage threshold and capped at 500 against monsters and minions.

When Terrify is used against targets with a cooldown, it will double the total damage and minimum threshold. Minions will always get “fear” if Fiddlesticks isn’t attacking them, and there’s no champion in view.

Bountiful Harvest: Fiddlesticks forms a tether between itself and nearby enemy units over the cast time, channeling up to 2 seconds. During this period, Fiddlesticks will reveal itself harvesting the souls of the tethered opponents.

While Fiddlesticks is channeling, tethered enemy units are revealed and will receive magic damage every 0.25 seconds, with the last tick inflicting additional magic damage. However, the total damage of this attack is reduced to 50% against minions.

During Bountiful Harvest, Fiddlesticks will heal itself for a portion of the pre-mitigation damage dealt. But the damage dealt is reduced to 15% when used against minions.

The attack ends when all targets have been eliminated or managed to break the tethers. However, if Fiddlesticks’s channel wasn’t interrupted, you’ll be refunded around 60% of the remaining cooldown.

Reap: Fiddlesticks will slash a target location using its scythe—inflicting damage to nearby enemy units while slowing them down for 1.5 seconds.

Crowstorm: This active attack from Fiddlesticks channels for 1.5 seconds; it will then blink to the target location after completion. During the attack’s duration, numerous crows will fly wildly around it for 5 seconds, inflicting magic damage every 0.25 seconds to nearby enemy units.

Fiddlesticks is an A-tier pick for the Jungle role in the latest League of Legends season and has a great win rate of over 52%, making it a grand champion. However, this scarecrow can be challenging to use.

Here are tips and tricks to help you master Fiddlesticks in no time:

Read about AKALI LOL next!