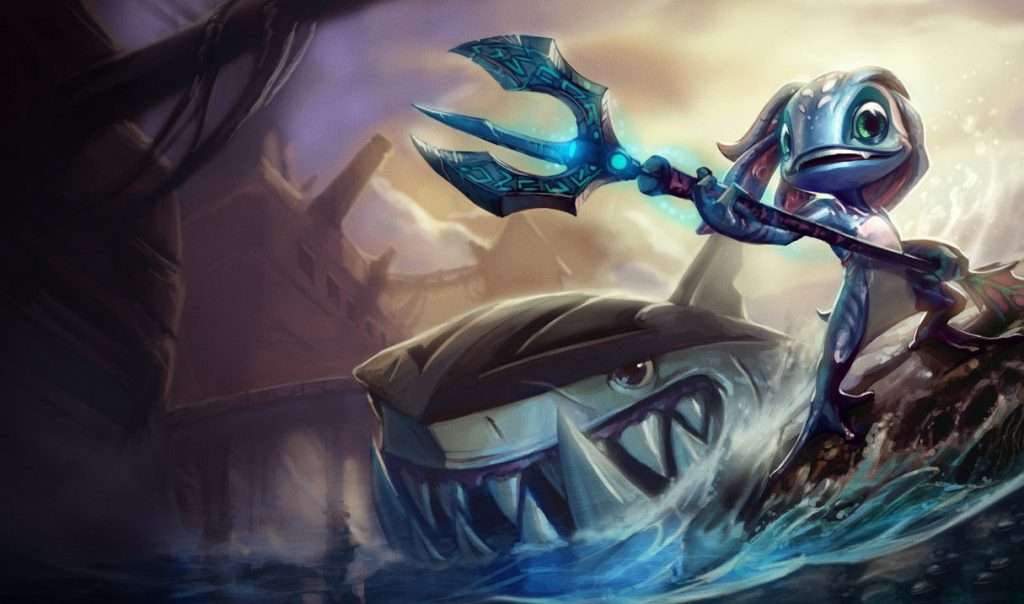 Assassins in League of Legends are known for their high-damage attacks and swift movements, and one unusual yet powerful champion in this class is Fizz.

Fizz is an amphibious Yordle, dwelling among the reefs of Bilgewater. This Yordle is a mystic race of spirits, taking up the appearance of mammalian bipeds.

Fizz retrieves and brings back the tithes cast into the sea by pirates. However, even the saltiest sailors know better than to cross Fizz—for tales of those who underestimated him have vanished.

Frizz can command the beasts of the deep, finding delight in confounding allies and enemies alike.

Elise is a powerful mage fighter that relies on using spiders and their abilities. That is the reason behind her name, the Spider Queen.

Elise is a cunning champion because she can quickly transform and use her pets to kill and destroy the enemies. She also uses the spiders’ abilities to increase her stats and launch a surprise attack on enemies.

Elise is from the House of Kythera, who uses beauty and elegance to overpower the weak-minded. She plays a significant role in politics. However, when her husband cannot take it anymore, she was poisoned. Elise survived and killed her husband. Later, she became a mistress and took power from her lover. During a gathering, a pale woman approached her and she learned the wonders of society. Elise wanted to restore and keep her beauty, and she made a deal of killing innocent women in exchange for beauty.

Elise made an encounter with the pale woman, and they entered into the contract – mutualism and reaching their own goals. From that day onwards, Elise did not need to worry about her appearance anymore and maintain her beauty.

Fizz is best for mid-lane gameplay and dominates over immobile mages. He’s a fan favorite and can inflict moderate to great damage when used right.

You can apply Fizz’s physical damage to on-hit effects, including Seastone Trident active and passive.

Passive: Fizz will rend enemy units on-hit, and those affected by Chum the Water’s lure will receive additional magic damage for 3 seconds and mark them for 6 seconds.

Active: When Seastone Trident is activated, Fizz’s next basic attack will receive a bonus of 50 range and reset his auto-attack timer.

His empowered basic attack will also inflict bonus magic damage, and if the target has been marked for a few seconds, the damage will be tripled.

Single Cast: When activated once, Fizz will vault toward the target location where enemies can’t target him for 0.75 seconds.

After a short pause, he’ll complete his vault and splash onto the ground underneath him, dealing magic damage to nearby enemies while slowing them down for 2 seconds.

Double Cast: When the spell’s activated twice, Fizz will dismount his trident without stopping, enabling him to perform two dashes quickly.

When landing, he’ll deal magic damage to nearby enemies but at a smaller radius and without applying slow.

When activated, Fizz will throw a lure forward in a straight line to attract sharks, causing them to emerge after 2 seconds and inflict magic damage. It will also knock aside surrounding enemies and slow them down for 1.5 seconds.

The further Fizz’s lure travels in its initial flight, the bigger the shark is attracted, increasing its slow duration while expanding its eruption radius and knockback distance.

If enemy champions manage to intercept Fizz’s lure as it flies, it binds them and summons the shark at their locations. The lure’s holder will be slowed down and knocked up for 1 second.

Fizz isn’t a complicated character to use, but he’s challenging to master, especially when learning his combos. Once you understand how to cope with Fizz’s unique playstyle, you’ll be winning game after game in no time.

Here are a few tips and tricks to help you master Fizz’s playstyle with ease.

Read about EKKO next!