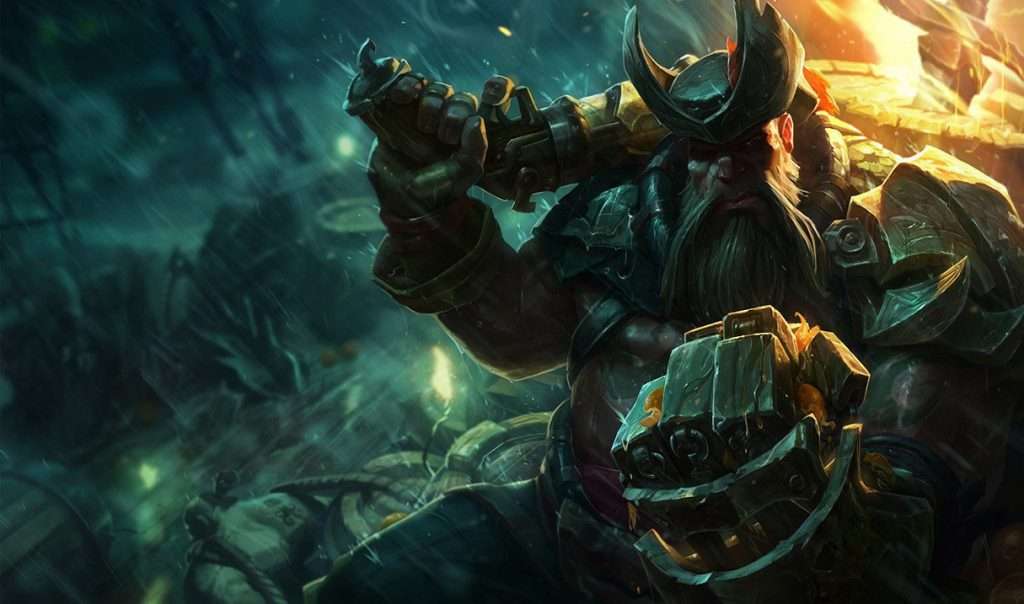 Specialists are “rogue” champions that are largely unclassified. One such champion is Gangplank.

He’s an unpredictable and brutal champion. Gangplank was once a great king, ruling the port city of Bilgewater, but his reign was cut short.

However, while his reign is over, many believe this only made Gangplank more dangerous—and potent. Now, Gangplank would see Bilgewater bathed in blood once more before letting someone else take it.

With pistols, daggers, and barrels of gunpowder in hand, Gangplank is determined to reclaim what he once lost.

Gangplank is a voyager and pirate, having grown rich by preying upon the Twelve Seas trade routes—making himself many strong enemies.

Although Gangplank managed to incur the wrath of many, none have yet brought him to justice. Gangplank takes pleasure in the rewards posted for his head.

He constantly ensures to nail them to the Bounty Board in Bilgewater for all to see whenever he returns to the port city.

However, recently, the famous bounty hunter, Miss Fortune, brought down Gangplank. His ship was destroyed while all of Bilgewater was watching, killing his crew and destroying his aura of invincibility.

Now people have seen that Gangplank’s vulnerable, the gangs of Bilgewater have risen, fighting to win dominion over the port city. However, despite getting severe injuries from the explosion, Gangplank survived.

Now, Gangplank is determined to rebuild his strength to reclaim his former glory—and ruthlessly punish all those who turned against him.

Gangplank is a versatile champion at all stages of the game and is one of the strongest lane swap champions. He’s unpredictable and potent, making him a desirable character in League of Legends.

Let’s take a closer look at Gangplank’s unique set of skills and abilities:

If Gangplank hits an enemy unit using Trial By Fire, he’ll gain 30% bonus movement speed for 2 seconds. You can’t use Trial by Fire alongside Powder Keg or Parrrley.

When activated, Gangplank will consume a substantial quantity of citrus fruits, cleansing himself from crowd control while restoring some of his health.

Passive: Innately, Gangplank will stock a Powder Keg, up to a maximum of three.

Active: Gangplank will place the stocked Powder Keg at the target area for 25 seconds, connecting to other nearby Powder Kegs to deal more damage.

Gangplank and his enemies can attack the Powder Keg using basic attacks, inflicting one damage per hit. The champion can also shoot the barrel using Parrrley.

However, if Gangplank scores the killing blow, it’ll trigger a chain reaction that explodes nearby connected Powder Kegs. But if he gets killed by an enemy, the Kegs will be safely dismantled.

Exploding Powder Kegs can grant sight of its explosion radius for 2 seconds, dealing attack damage to all enemies in the area. It will also inflict bonus physical damage to enemy champions.

Finally, attacking a Powder Keg with Spellblade allows Gangplank to consume the effect. When absorbed, the Powder Keg will store the damage it would’ve dealt with additional physical damage.

When activated, Gangplank will shoot a flare into the air, signaling his off-shore ships to fire on a target location for 8 seconds. He’ll also call down 12 waves of cannonballs in clusters of three every 2 seconds.

While in effect, the attack will grant sight of the area. All waves inflict magic damage to all enemies within the location, slowing them down by 30% for 0.5 seconds.

Gangplank can buy upgrades for his ship in the store for 500 Silver Serpents each on, improving Cannon Barrage in three ways:

Fire at Will – The skill will fire six additional waves over its duration.

Gangplank is a champion with an extremely high skill cap and is very difficult to pick up. Despite Gangplank’s small lane appearance, this pirate can be a massive lane bully. His late-game is one of the best in League of Legends, so don’t rush. Besides buying items, Gangplank can upgrade his ultimate three times in the game. However, he’s one of the most challenging champions to master. Here are tips and tricks to help you master Gangplank’s gameplay in no time.
Read about DR MUNDO next!