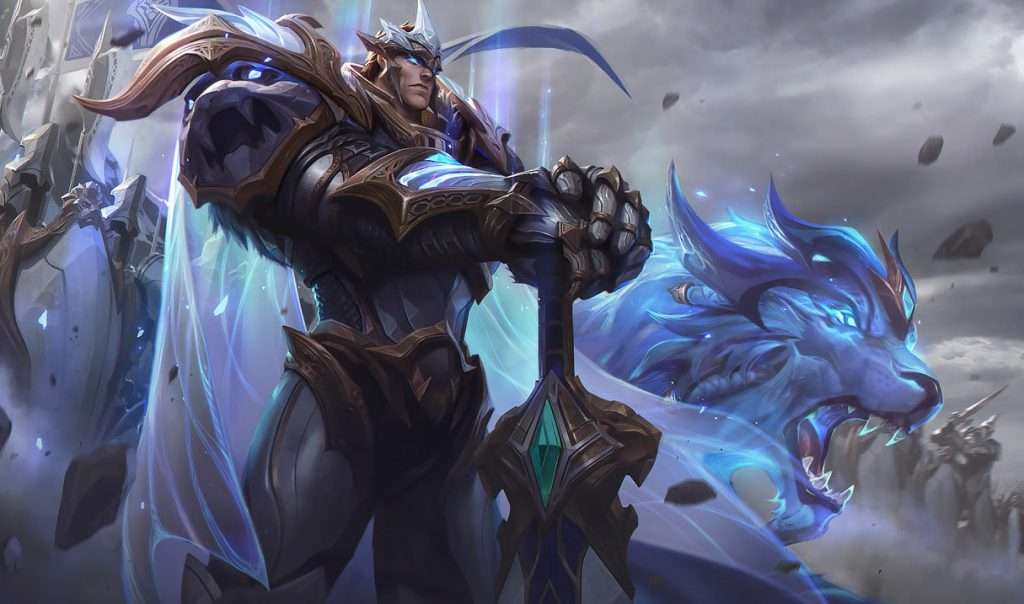 Juggernauts are melee fighters that relentlessly march down the opposition, devastating those people foolish enough to face them. One of the top-tier champions in the Juggernaut class in League of Legends is Garen.

Garen is a proud and noble warrior of Demacia, fighting as part of the Dauntless Vanguard. He’s famous in the kingdom of Demacia and is well-respected enough by his enemies.

Garen came from the prestigious Crownguard family and has been entrusted with defending Demacia and its ideals. Fighting for what it’s right and protecting his family’s honor.

Clad in magic-resistant armor and wielding a mighty broadsword, Garen swears to confront all enemies of Demacia on the battlefield in a veritable whirlwind of righteous steel.

Garen is one of the most popular and strongest warriors in Demacia. He was born into the noble Crownguard family with his younger sister Lux.

He knew from an early age that he’d be expected to defend Demacia with his life. So, Garen kept training, and when he reached the age of 12, he left the Crownguard home to join the military.

During his time as a squire, Garen’s days and nights were consumed by studying and training. Honing his body and mind into a weapon worthy of the Demacian steel.

During his training, he met the young Jarvan IV, where the two became inseparable ever since. After several years, Garen earned his place in the “Shieldwall” and became a warrior of Demacia.

Garen gained a fearsome reputation on the battlefield, and through courage and skill, the mighty Demacian warrior won his place among the Vanguard. With his family and good friend the prince looking on, Garen took his oaths before the throne.

Now, Garen stands committed in defense of Demacia against all enemies. Garen has also become the embodiment of all the greatest and noble ideals, which the kingdom was founded.

Garen’s zero-cost spells and foundation of regeneration and resistances offer players an aggressive playstyle, justifying his reputation as the most fearsome warrior in Demacia’s fighting elite.

Here are Garen’s unique set of skills and abilities:

Perseverance: This passive skill allows Garen to regenerate his health every 5 seconds. However, Garen can lose Perseverance for 8 seconds if he takes damage from epic monsters, turrets, and champions.

Decisive Strike: When activated, Decisive Strike allows Garen to cleanse himself from all slow effects while gaining 30% bonus movement speed for a couple of seconds.

Plus, Garen’s next basic attack within 4.5 seconds of activating Decisive Strike results in a “non-cancelable” windup, lunging at the target and dealing bonus physical damage.

Courage Passive: Garen gains 0.25 bonus armor and magic resistance every time he kills an enemy unit. You can earn up to 30 bonus resistances at 120 unit kills.

Active: When “Courage” is activated, Garen reduces incoming damage up to 30% for a few seconds. Additionally, for the initial 0.75 seconds, Garen gains a shield and a 60% Tenacity boost.

Judgment: When activated, Garen becomes ghosted, where he’ll rapidly spin his sword around his body seven times in 3 seconds. However, Judgment will lead him to lose the ability to make a basic attack.

But Judgment lets Garen gain an aura that can deal physical damage to all nearby enemy units. He increases the number of spins by 1 for every 25% bonus attack speed from mythic passives, upgrades, and item stats.

If Garen manages to hit enemy champions at least six times, they’ll get their armor reduced by 25% for six seconds. The 7th hit refreshes the duration of the armor reduction—and you can recast Judgment after 1 second.

Additionally, the total damage inflicted by Judgment is increased by 50% against non-epic monsters.

Demacian Justice: This active attack is where Garen calls upon the might of Demacia onto his target—inflicting “true” damage based on the target’s missing health. While Demacian Justice is in effect, the target also gets revealed for 1 second.

Although Garen has a simple kit, he can be a challenging champion to master as he lacks mobility, and his late-game damage can be tricky. However, he’s one of the best top-lane champions in the game, so it’s worth the shot.

Here are tips and tricks to follow to help you master Garen with ease.

Read about JARVAN IV next!