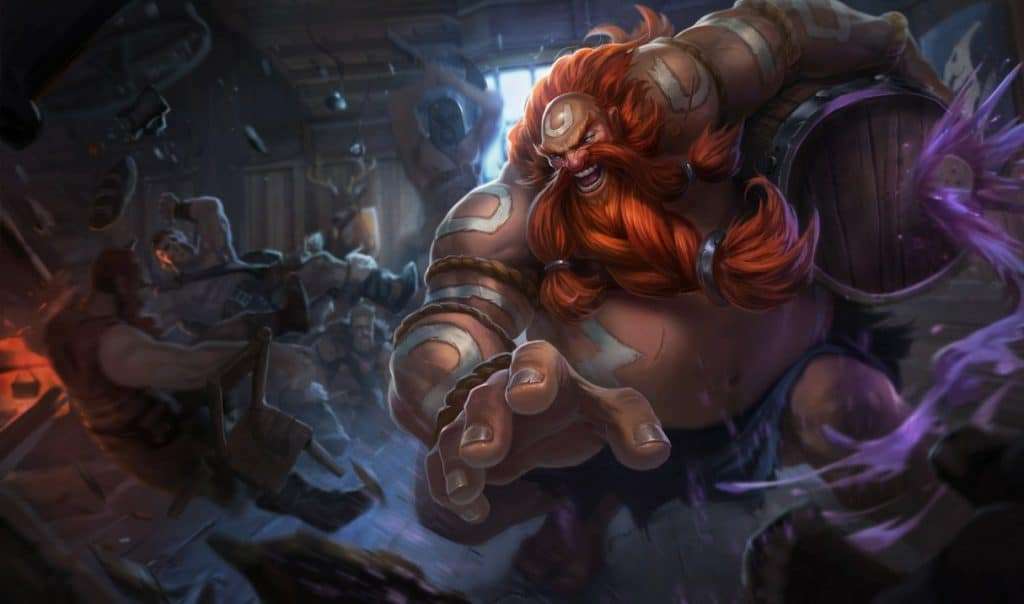 Mages are known to be range champions boasting powerful magic damage skills, while melee champions do best in 1v1 situations thanks to their high defense and massive physical damage. One champion that boasts characteristics of both classes is Gragas.

Gragas is a massive and rowdy brewmaster that possesses equal parts of jolly and imposing. He’s on the quest to find the perfect pint of ale to satiate his cravings for a good brew and adventure.

Hailing from parts unknown, Gragas is searching for rare ingredients across the unblemished wastes of Freljord, trying all brew recipes as he goes.

Gragas, often intoxicated and impulsive, has become well-known for the brawls he starts—usually ending in all-night parties and expensive property damage.

Regardless of the destruction Gragas brings, he hasn’t given up on finding the perfect pint of ale and is still on the search to this day.

Besides fighting, Gragas, the famous brewmaster, loves to drink. His unquenchable thirst for potent ale led him to an adventure of a lifetime, searching for the “strongest ingredients” to toss in his still.

Unpredictable and abrupt, this rowdy carouser loves downing kegs as much as downing enemies with his massive physique and brute strength. Although Gragas loves drinking, he never seems to reach the divine state of intoxication.

After that discovery, the great brewmaster decided to create the ultimate ale and reach the utmost levels of intoxication. Gragas’s quest eventually brought him to Freljord.

After discovering a flawless shard of ice, Gragas headed for civilization, eager to share his new concoction. He managed to meet up with two tribes while in Freljord and discussed an alliance with Ashe.

Although Ashe was set on this alliance, other warriors opposed, where Gragas fought his way through their hearts by Body Slamming his way to a brawl. After the fight, Ashe proposed to have a friendly drink with Gragas.

As their tempers got doused in suds, the two tribes bonded over the shared love of Gragas’s latest brew.

Although a tough fight was averted, and the tribes hailed Gragas as a hero, he still hadn’t achieved the perfect brew. So once more, Gragas sets off to wander and explore the tundra in search of ingredients to make Runeterra’s best and ideal pint.

Gragas is one of the few Melee mages in League of Legends download, boasting mobility, CC, damage, self-healing, and Tankiness. Gragas was solely a mid-lane champion before his rework, but now, he works on any lane.

Gragas’s spells can deal AoE damage, making him a great jungle, but he also works great for top and mid lanes.

Here’s a closer look at Gragas’s skills and abilities:

This passive skill allows Gragas to heal himself for 8% of his max total health upon casting an ability.

When activated, Gragas will roll a cask to a target location, granting sight of the area and fermenting over 2 seconds. While the cask rolls, it increases its damage up to 150% and “slow effect.”

You can recast Barrel Roll after the cask finishes its travel. After the barrel detonates, it’ll deal magic damage to all nearby enemies, reducing movement speed up to 30% against minions.

When using Drunken Rage, Gragas will channel for 0.75 seconds and drink from his brew. All while gaining damage reduction for 2.5 seconds.

When Gragas finishes the channeling, his next basic attack within 5 seconds will have a non-cancelable windup and gain 50 bonus range. Plus, Drunken Rage will inflict bonus magic damage to the target enemy and nearby units.

Gragas charges forward to individual enemy units, inflicting magic damage to those opponents and nearby ones. The attack also knocks them back and stuns them for one second.

When Gragas hits an enemy successfully, his Body Slam cooldown is reduced by 3 seconds. You can use Explosive Cask and Barrel Roll during Body Slam.

When activated, Gragas will hurl a cask traveling to the target direction over 0.55 seconds and exploding on impact. This attack deals magic damage to all enemy units in the target location.

Plus, this attack knocks back enemies up to 900 units, however, not through the terrain.

Gragas is a decent and balanced champion, showing great potential. He can inflict lots of damage and sustain in the jungle. However, he can be a tricky champion to master. Here are some tips and tricks to help you master Gragas in no time: Check out JINX!