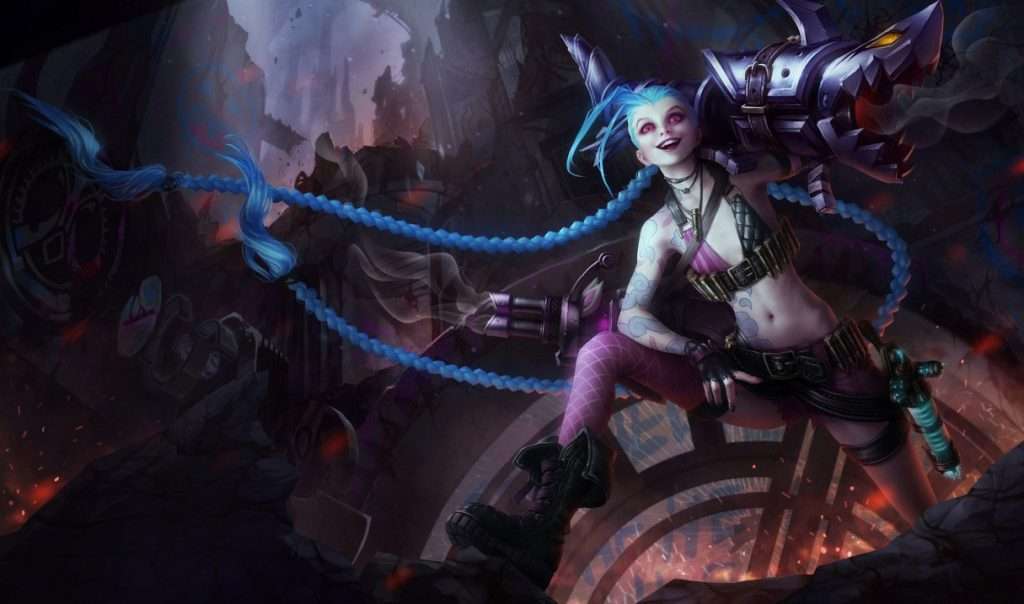 Jinx, a manic and unpredictable criminal from Zaun, lives to wreak havoc everywhere she goes. She despises boredom and gleefully brings a unique chaotic brand of pandemonium wherever she wanders off.

Using an arsenal of quirky and powerful weapons, Jinx unleashes her loudest blasts and brightest explosions—leaving a trail of mayhem and panic.

Jinx is a psychotic and impulsive criminal from Zaun, wreaking havoc no matter where she goes.

Jinx is widely considered the master of chaos, causing terror in Piltover while running from the law. Piltover is a progressive town than most of Valoran.

It’s where Sheriff Caitlyn and Enforcer Vi work hard to maintain their astute reputation for law enforcement and action against criminals.

Jinx is Vi’s biological sister. After escaping Vi’s clutches, she has become one of the Caitlyn and Vio duo’s many rivals and is looking to continue terrorizing Piltover.

With her arsenal of deadly weapons, Jinx unleashes the most potent blasts and explosions to defeat her foes, causing mayhem in her wake.

Jinx carries her chaotic brand of pandemonium no matter where she goes, making the world crazier—one blast at a time.

Marvel at the chaos and start a crime spree as the famous Jinx, also known as the Loose Cannon in LOL.

Using a pair of powerful guns known as Fishbones and Pow-Pow, Jinx can light up any battlefield by chaining her skills and abilities—keeping enemies on-tilt and off-guard, guessing which gun you’ll unleash next.

Revel as the world burns using Jinx by mastering her skills and abilities below:

Get Excited! This passive skill lets Jinx gain a 175% bonus movement speed that decays over 6 seconds whenever an enemy champion, epic monster, or enemy turret gets destroyed within 3 seconds of being damaged by her.

Additionally, Get Excited gives Jinx a 15% total attack speed, allowing her to exceed the attack speed cap for the same period.

Switcheroo! This ability is where Jinx switches between her minigun, “Pow-Pow,” and her rocket launcher, “Fishbones.”

Pow-Pow: Basic attacks using Pow-Pow grant Jinx a stack of Rev’d up for 2.5 seconds, which you can stack up to three times. Its duration refreshes on its subsequent attacks.

Rev’d up grants Jinx bonus attack speed, with the initial stack being twice as powerful as the others. The “stacks” you’ve gathered decay one at a time as they time out.

The damage made by Fishones can be affected by modifiers for a critical strike—while Fishbones is in place, Jinx’ll gain bonus range. However, she’ll lose her bonus attack speed.

Zap! When activated, Zap lets Jinx fire a shock blast in a target direction, inflicting physical damage to the first foe it hits. When you successfully hit enemy units, it will reveal and slow them down for 2 seconds.

Flame Chompers! When firing Flame Chompers, Jinx will toss out three Chompers at her target direction that’ll land after 0.4 seconds in a straight line. It arms after 0.5 seconds and explodes after 5 seconds, inflicting magic damage to all nearby enemy units.

Jinx’s Chompers can explode earlier when hitting an enemy champion, rooting them for a little over 1 second. Remember, enemy champions can only be set off and damaged by one Chomper.

Super Mega Death Rocket! When activated, Jinx will fire a rocket in a selected direction. It grants her a bright sight of the location as her rocket flies through the area.

The rocket explodes when colliding with enemy champions, inflicting physical damage to surrounding enemies. Plus, the attack can grant Jinx sight of the area for 2 seconds.

The Super Mega Death Rocket can deal around 10% to 100% damage, depending on the travel distance. Meanwhile, the bonus damage based on a target’s missing health is retained.

Enemies near the primary target will take around 80% damage, bonus damage based on missing unit health.

Here are a few tips and tricks to help you master Jinx’s crazy playstyle.

Read about GRAGAS next!