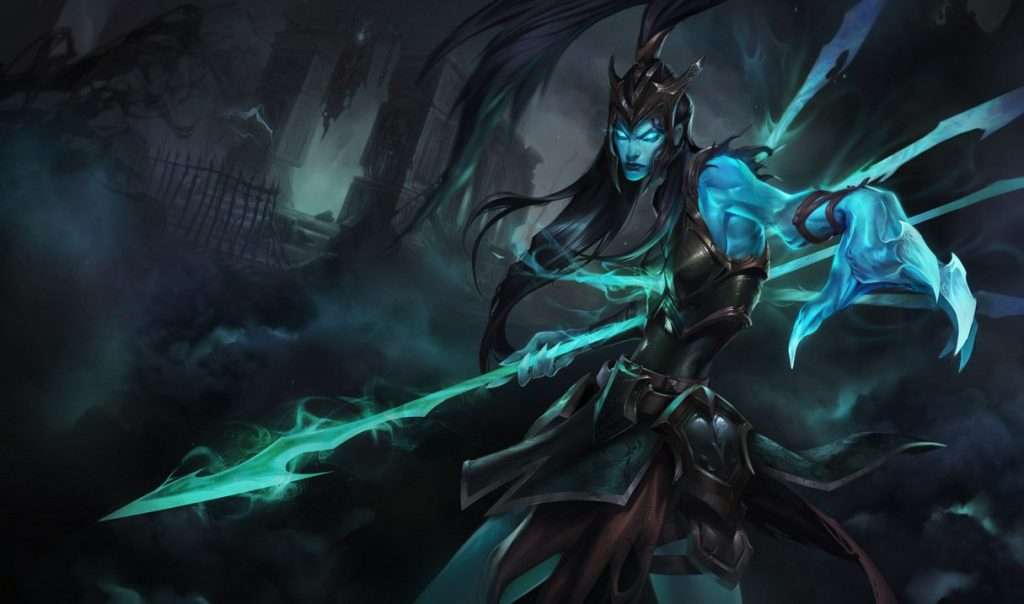 Marksmen are champions usually focused on using basic attacks rather than their abilities as they can scale and deal devastating levels of damage in the late phase of the game. One notable champion in this class is Kalista.

Kalista, a specter filled with wrath and retribution, is the undying spirit of vengeance. She’s an armored nightmare summoned from the Shadow Isles to hunt traitors, deceivers, and general evil beings.

Although the betrayed may cry out in blood to be avenged, Kalista usually only follows those willing to pay with their souls.

Those who become the priority of Kalista’s wrath need to make their final peace as this grim hunter, using the piercing fire of her soul-spears, ends their very existence.

Kalista is a spirit embodying wrath and retribution, the undying spirit of revenge. She was once the niece of a great King and served him with her utmost loyalty.

However, after the kingdom began to fall, Hecarim, her former comrade, betrayed her—and tried to kill her. The Iron Order joined him in betrayal, plunging their spears into Kalista’s body as she fell.

But that wasn’t enough to kill her, as when Kalista opened her eyes, she had gained new dark powers of strange magic. She didn’t know how it had happened.

As Kalista clung to her memories of treason, they started to disappear. Her memories began to gradually fade until the thirst for vengeance was all left in her mind.

A thirst that can only be satiated with the blood of those who betrayed her. (Read about League of Legends)

Here’s a closer look at Kalista’s skills and abilities:

Martial Poise: Alongside her passive skill, Kalista’s “basic” attack possesses a lot of unique properties, including:

Pierce: When activated, Kalista will hurl a spear in a target direction, dealing physical damage to the first foe hit.

If you manage to kill a target with Pierce, the spear will continue to move to transfer all of the target’s Rend stacks to the next opponent it hits. This can happen indefinitely until the spear reaches its max range.

Passive: Kalista will gradually stack up Sentinel Charge, up to a max of two.

Active: When activated, Kalista will summon the Sentinel moving forward in the target location, granting sight of the area along its path.

When Kalista and her Oathsworn are tethered, Kalista’s basic attacks, and Pierce apply a Soul-Mark to the targets.

If both Soul-Marks get applied to the same enemy unit or structure within 4 seconds, they’ll take bonus magic damage—and can’t be Soul Marked again for a couple of seconds.

Sentinel’s Soul Mark can deal a minimum of 75 damage to enemy minions, executing them if they have below 125 health. Kalista can apply the damage on-attack while the Oathsworn does so on-hit.

Passive: Kalista’s basic attacks on-hit, when combined with Pierce, lodges a spear into an enemy unit, applying Rend stack. This attack alone can stack up to 254 times, which refreshes Pierce’s subsequent attacks and hits.

Active: Kalista removes all the stuck spears from nearby enemy units, getting all their stacks to inflict physical damage while slowing them down for 2 seconds.

You can use Rend during the dash of Martial Pose and cast time of Pierce, so take advantage of this tip.

Fate’s Call: Kalista invokes her tether to get back her Oathsworn, pulling them over one second and cleansing them from all kinds of effects.

The Oathsworn is rendered non-targetable and invulnerable, during which Kalista holds them. With this, you can dash with displacement immunity.

Upon completion, the Oathsworn will vanish. You can recast the skill to meet with Oathsworn again.

Kalista is a relatively “fragile” champion needing great mastery at the “Hit and Run” gameplay. It’s a technique consisting of hitting foes while retreating to deal maximum damage while staying out of enemy reach.

It’s made more manageable by Kalista’s passive, allowing her to make small jumps after launching auto-attacks. However, Kalista is a moderately challenging champion to master.

Here are a few tips and tricks to help you get better at using Kalista as one of your “main” champions:

Never use Kalista’s Fate’s Call to knock up one target, especially during mid-game since it has a long cooldown.

Read about ALISTAR next!