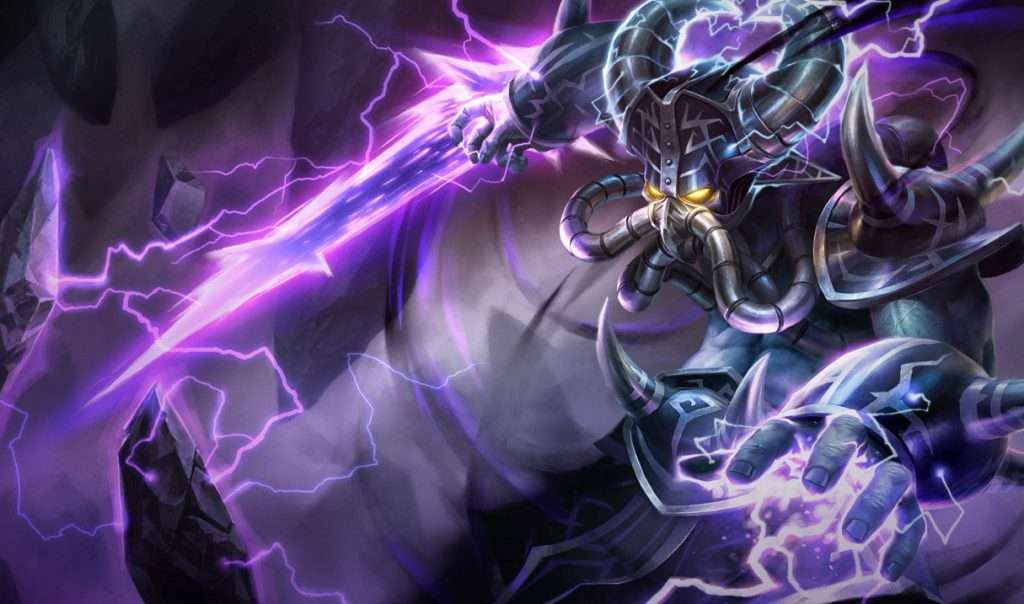 Kassadin, the assassin, and the Void Walker know his days are numbered as he cuts through the burning swath of the darkest places of the world.

Kassadin is a widely traveled Shuriman guide who had chosen to raise a family among the relatively peaceful southern tribes until the Void destroyed his home.

He vowed to avenge his home and his family, combining different arcane artifacts and forbidden tech for the struggles ahead.

Now, Kassadin sets out for Icathia, ready to face any monstrous Void-construct in his search for the “prophet,” Malzahar. Check Buff LOL!

Kassadin began life as an offcast, walking through the Great Sai’s harsh sands with merchant caravans—who noticed his incredible talent.

The foreign individuals who sought Kassadin’s talents slurred “Kas Sai A Dyn?” or “Whom does the desert know” to the would-be assassin, allowing him to become Kassadin in the back alleys of Bel’zhun.

Kassadin eventually settled in a small village in the rocky canyons with his wife and daughter. He often traveled, always coming back home with a tale on hand.

However, during an expedition with his fellow caravaneers—the maw of the underworld had opened up. To which they’d barely escaped with their lives.

Fearing for his family’s safety, Kassadin left the others behind. However, he was too late. After that, Kassadin swore to avenge his wife and daughter, eliminate the insidious Prophet, and source his power.

Now, with the Nether Blade of Horok in hand, he would go where no man dared to walk and face the Void alone.

He swore to have his vengeance, even if it killed him.

Kassadin is an extraordinary assassin possessing unparalleled mobility and strength. However, his mana costs are relatively high, making mana items a priority.

That’s why Kassadin is best played later in the game to choose situational items. However, overall, Kassadin is one of the best picks for mid-lane players.

Here’s a closer look at Kassadin’s unique skills and abilities:

Null Sphere: When activated, Kassadin will fire an orb of pure void energy at a target enemy location, which upon contact deals magic damage, disrupting their ongoing channelings.

Null Sphere’s excess energy will also form around Kassadin, giving him a temporary shield that can absorb magic damage for 1.5 seconds.

The mana restored by Nether Blade is quintupled against enemy champions. This skill lets Kassadin restore his mana faster, making him even more lethal than ever before.

Passive: This innate skill lets Kassadin gain a Void Energy stack every time he or a nearby ally or enemy champion uses an ability. It stacks up to six times.

Active: When activated, Kassadin will emit a pulse of void energy in a cone towards target direction, inflicting magic damage to enemy units within the location. It also slows them down for one second.

Riftwalk: After Riftwalk’s cast time, Kassadin will blink from his current location up to 500 units further toward the target location, inflicting magic damage to surrounding enemy units.

Each subsequent Riftwalk cast in 15 seconds doubles the skill’s mana costs while increasing its damage—stacking up to four times.

Kassadin is a relatively challenging champion to use as he’s a melee champion, which is usually harder to play in lane.

Plus, Kassadin starts weak, so it can be hard to play as him in early stages of the game.

Here are a few tips and tricks to help you get better at using Kassadin’s assassin playstyle:

Check out ANIVIA next!