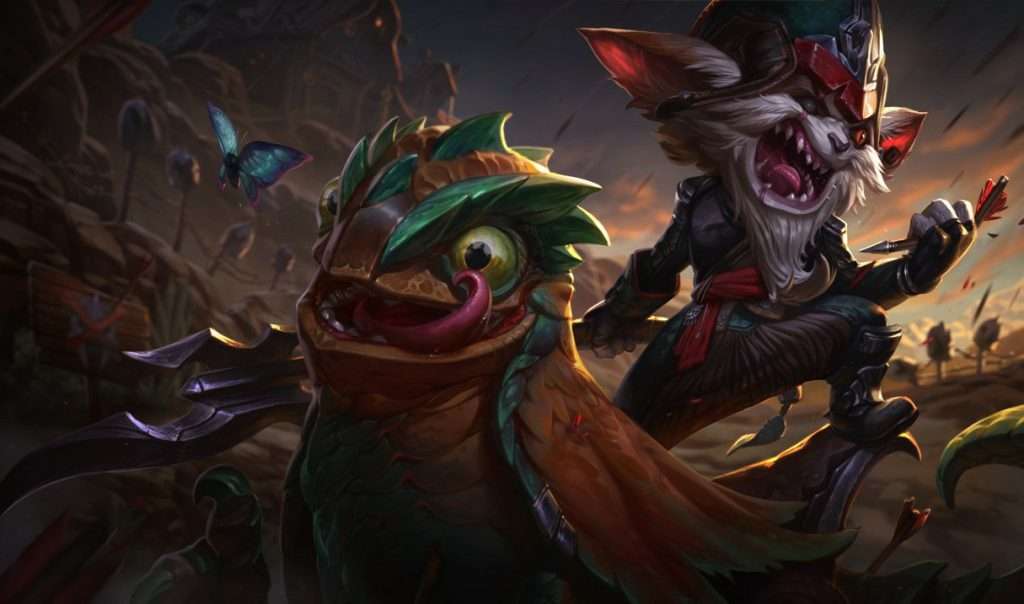 The tiny Yordle warrior known as Kled is fearless as he is ornery, embodying the furious bravado of Noxus.

Kled is an icon loved by the empire’s soldiers but loathed by both officers and nobility.

Many tales surround Kled, with most claiming that he fought in all campaigns the legions have waged and has gotten every military title possible.

Kled is a famous Yordle warrior residing in Noxus and is the combination of courageous, cranky—and 100% crazy.

Many legends say that Kled has fought in every campaign the Noxus empire has fought, receiving all military titles possible.

Although one would doubt Kled’s legends, there are some things for sure, Kled has never backed down from a fight—and is always ready to charge for battle!

Kled’s an aggressive champion, boasting two phases of fighting, mounted and dismounted. His spells change between the two forms, and Kled can recover his mount by dealing enough damage to enemy champions.

Skaarl, The Cowardly Lizard: Passively, Kled rides his mount, Skaarl. While mounted on Skaarl, all damage inflicted to both is taken by Skaarl, who has around 400 to 1200 base health.

When Skaarl reaches 0 health, Kled will cleanse himself of all crowd control and become non-targetable, immune to crowd control for 0.5 seconds, reducing incoming damage received by 100%.

Bear Trap On a Rope: When casting Bear Trap on a Rope, Kled will hurl a bear trap tied to a piece of rope in a target direction, inflicting physical damage to all enemy units it hits. It’s increased by 50% against enemy minions and monsters.

If the tether doesn’t get broken by the end of its period, Kled will pull the target 100-units toward him—dealing physical damage for 5 seconds.

Violent Tendencies: This passive skill lets Kled gradually enter a frenzy, granting him 150% bonus attack speed on his subsequent four basic attacks within 4 seconds after the initial one. The final attack then deals bonus physical damage, capped against enemy monsters.

Jousting: Jousting lets Kled and Skaarl dash in a target direction, inflicting physical damage to all enemies within their path. However, this skill can’t cross terrains.

When hitting an enemy champion or epic monsters, the duo will dash a fixed 200-units through them, marking and revealing them for 3 seconds. After the dash ends, the duo will gain a 50% bonus movement speed for one second.

Chaaaaaaaarge!!! When activated, Kled and Skaarl will charge toward a target location, automatically navigating terrain along the process, where they’ll be “ghosted” and immune to crowd control.

However, if the “charge” doesn’t complete within 15 seconds, it’ll end earlier. The charge can be instantly interrupted if Kled dismounts during the duration.

When charging, the duo will gain bonus movement speed and a shield for every 0.25 seconds of traveling, granting them over 950 total movement speed over 3 seconds. Plus, around 10% to 100% of the max shield amount.

The shield from this skill can last up to 2 seconds, and the duo will trail a direction draft in their wake that usually lasts up to 9 seconds—activating Mr. Kled’s Wild Ride.

Kled is a close-ranged champion, excelling at dueling and assisting initiation. He can also Jungle as long as he stays mounted on Skaarl.

Kled’s playstyle and ability usually revolve around aggressive engagement, encouraging him to fight instead of running away—even when dismounted.

Here are tips and tricks to help you get the most out of Kled: (Read more about Buff LOL)

You can read about DARIUS next!