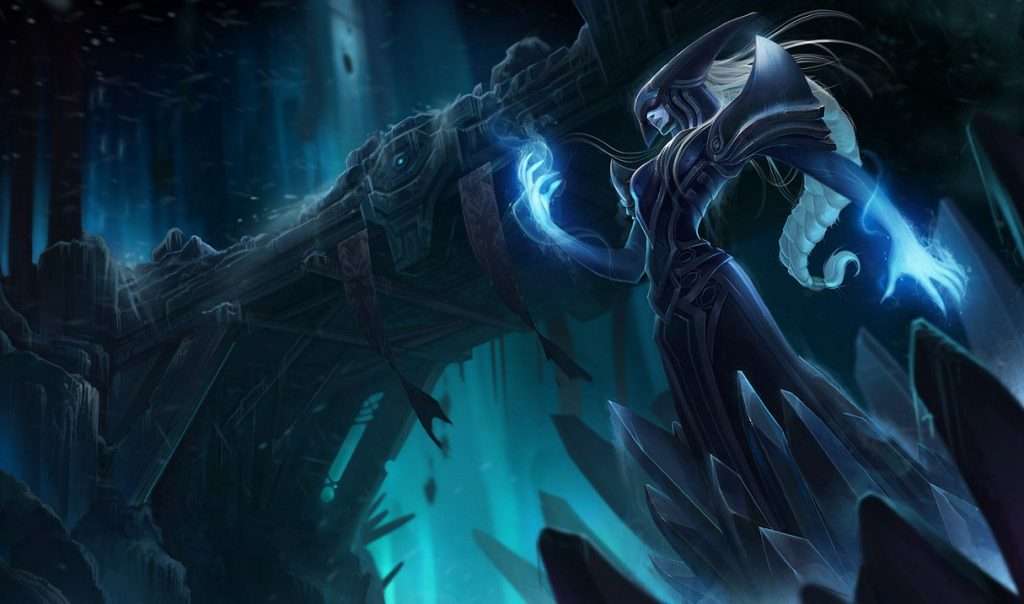 Lissandra is one of the few living original “Iceborns” and has been around for more than 10,000 years.

As the leader of the prestigious Frostguard, many believe Lissandra is a living saint who brings healing and wisdom to the Freljord tribes.

Her magic twists the power of ice into something darker, doing more than freezing her foes—she impales and crushes them. She’s famously known as the “The Ice Witch.”

However, Lissandra is the “true” corruptor of nature, constantly plotting to unleash an ice age on the rest of the world.

In this dangerous and unpredictable age, Lissandra, alongside her sisters, sought to harness the powers at war. However, Lissandra was the only one who survived, standing against the mortal world’s magic out of the three.

She is the reclusive leader of the Frostguard. However, her desire for power brought the beginning of the end to all of Runeterra. Lissandra made the mistake of making a pact with the Watchers.

Lissandra did everything in her power to rewrite history, removing all records of what had happened with her sisters and the Watchers. But even as she retreated into the shadows, rumors persisted.

Now, Lissandra uses her powers to twist the element of True Ice into something darker, entombing or impaling any who’d reveal her the truth. However, she was never able to control the legends about her sisters and power.

Her failure to remove their legacy has created two powerful Iceborn, leading multiple tribes within the Freljord.

Lissandra observes them, seeking any chance to pit them against each other while still trying to lock away the secrets she had buried deep beneath her citadel.

Lissandra is a great team fighting mage who can do wonders, setting up herself and her team to secure one win—after the other. Although she does have her limitations due to her short range, she makes up for it with her insane crowd control and usability.

She’s a mage champion that teams can rely on to set up and help win clash fights.

Here’s a closer look at Lissandra’s unique skills and abilities:

This passive skill is where Lissandra will spawn a Frozen Thrall from an enemy champion’s corpse when they die. Frozen Thralls are invulnerable and non-targetable ice spirits chasing nearby visible enemy units.

They also help you prioritize champions, slowing enemy units by 25% and shattering after four seconds, inflicting 120 to 520 bonus magic damage. It initially boasts a slow movement speed, increasing over the duration.

Lissandra throws a spear of ice in a straight line in a target location, inflicting magic damage to the first enemy unit it hits, slowing them down for 1.5 seconds.

However, if the spear hits an enemy unit and it shatters, it’ll let Lissandra gain increased range while dealing the same damage to other foes within its path but not applying the slow.

This skill lets Lissandra freeze all surrounding enemy units while dealing them with moderate magic and rooting them for a set period. The duration depends on Lissandra’s current level, and generally, the higher it is, the longer it will last.

When activated, Glacial Path will let Lissandra summon a claw of ice moving in a line in the target direction, inflicting magic damage to all enemy units it goes through over 1.25 seconds.

You can recast Glacial Path after 0.5 seconds while Lissandra’s “ice claw” is active, where she’ll consume the claw and blink to the current location.

Enemy Cast: When casting this ultimate to foes, Lissandra will freeze the target enemy, knock them down, and stun them for 1.5 seconds.

Self Cast: When you cast Froze Tomb on Lissandra herself, this will instantly entomb her, placing herself in stasis while healing her for 2.5 seconds.

The amount of HP Frozen Tomb can restore for Lissandra can increase anywhere between 0% to 100%, depending on your missing health at the time of cast.

Plus, while in effect, black ice will spread from your Frozen Tomb’s target, inflicting magic damage to all enemy units within the area and those entering it. Any foes going to the target will get slowed down by 0.5 seconds.

Learn how to send your foes to an icy grave with Lissandra, one of League of Legends’ incredibly mobile and mana-efficient mages. She relies heavily on crowd control and kiting instead of typical burst damage.

Lissandra’s unique skills and abilities make her a fantastic choice for a roaming mid or self-sufficient baron.

Here are some tips and tricks to help you master Lissandra’s playstyle:

You can also check Master YI!