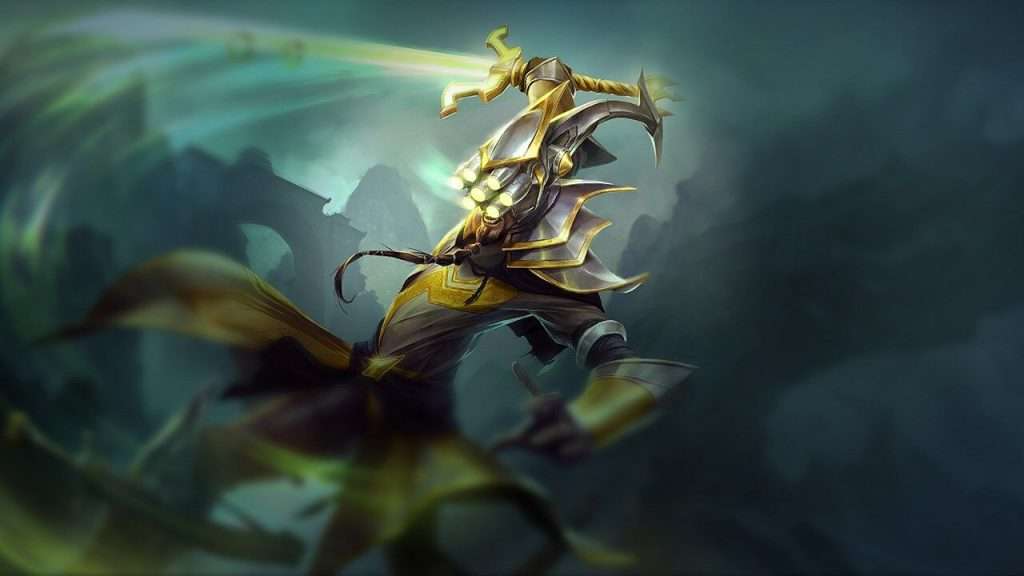 Master Yi is the perfect combination between a swift assassin and a cunning fighter in League of Legends. He has tempered his body and conditioned his mind to take down his enemies swiftly.

Although Master Yi chooses to enter into violence as a last resort, his blade’s grace and speed ensure resolution is always swift and deadly.

He’s one of the very last living practitioners of Wuju. Master Yi dedicated his life to continuing the legacy of this ancient Ionian martial art.

Now, along with Kong, a monkey-like Vastaya, travels the First Lands, seeking to honor the legacy of his lost home, helping him embody the “master” in his name.

Who is Master Yi?

Master Yi was a prodigy in swordsmanship, but he never resorted to complete violence unless, but all of these changed when Noxian warbands invaded his home.

When the Noxian commanders deemed Master Yi’s practice of Wuju as a threat, they destroyed his home village alongside its people and culture.

After coming home from war, Master Yi, slain in body, became the attack’s final casualty. With no other Wuju practitioners alive, Master Yi realized that the title of “master” was his to bear alone.

Years after the war, Master Yi met a monkey-like Vastaya named Kong, where the two eventually got along, and for the first time in years, Master Yi felt the spirit of Wuju once more.

After finding his purpose again, Master Yi aims to share the ways of Wuju. Now, alongside Kong, they travel the First Lands to honor Master Yi’s home’s legacy, sharing the wonders of Wuju once again to the world.

Master Yi is an assassin and fighter that can dominate solo and jungle lane, boasting heavy-hitting nukes, retained DPS, and reflex-driven defenses. All these make him the ultimate aggressive and robust champion.

This passive skill lets Master Yi’s “basic attacks” on-hit grant stacks of Double Strike for four seconds, stacking up to three times with the duration refreshing on the following attacks.

When reaching three stacks, Master Yi’s next basic attack on-hit will consume the stacks to strike twice, with the second one inflicting 50% AD physical damage.

The second strike will apply on-hit and on-attack, boasting a 100% effectiveness. Plus, it can be affected by critical strike modifiers.

Finally, if your primary target gets killed before the second strike, Master Yi will attack another enemy unit within 300 range.

When casting Alpha Strike, Master Yi will vanish, and after 0.231 seconds, he’ll mark the target enemy and move the mark to the nearest unmarked foe, repeating the action three times.

When finishing the marking and there are no longer targetable enemy units, Master Yi will reappear in front of the target units and inflict physical damage to all marked enemies.

The damage of Alpha Strike is increased against monsters. Meanwhile, if the target enemy dies or manages to run away during the delay, Master Yi will reappear at the cast location.

When casting Meditate, Master Yi will channel for 4 seconds. While in effect, Master Yi heals himself.

When activated, Master Yi will empower his sword, enhancing his basic attacks to inflict “true” damage on-hit for 5 seconds.

Passive: When Master Yi takes down enemy champions, it’ll reduce the current cooldown of his abilities by 70%.

Active: Master Yi will cleanse himself from all adverse effects, including slows and cripples—while gaining increased attack and movement speed and ghosting for 7 seconds.

While Highlander’s in effect, every time you take down an enemy champion, it’ll extend Master Yi’s Highlander duration by 7 seconds.

Master Yi’s the deadly combination of an assassin and fighter champion in League of Legends, serving as a melee driver with high attack speed and damage, mobility, and ultimate.

Here are tips and tricks to help you learn Master Yi’s unique and lethal playstyle:

You can also check Lissandra!