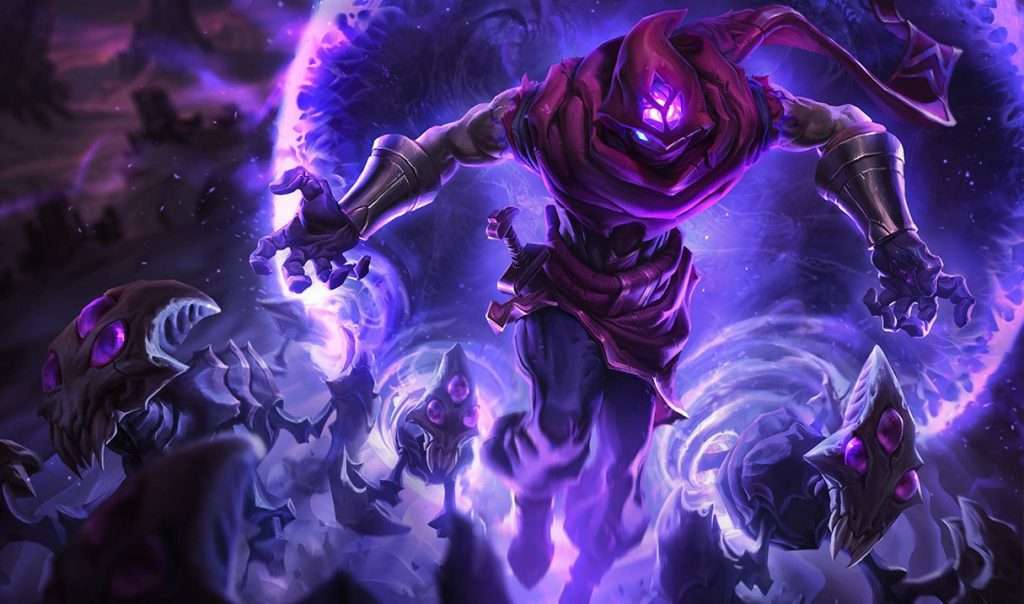 Malzahar is a zealous seer who dedicated himself to unifying all life, firmly believing that the newly emergent Void would be the path to Runeterra’s salvation.

Once a famous merchant in Amakra, Malzahar wandered to the desert wastes of Shurima in search of his future and life’s purpose. He followed the voices that often invaded his mind to ancient Icathia.

Amid the ruins of the magical land, Malzahar gazed into the dark heart of the Void itself, receiving new power and finally discovering his purpose.

Now, Malzahar sees himself as a shepherd, destined to bring others into the fold or release the Voidling creatures dwelling beneath.

Malzahar was once a struggling child who lived off the streets in Amakra, but after he began earning money and living lavishly, he soon felt nothing.

Now, filled with nothing but a sense of emptiness, he left Amakra for good.

He roamed throughout the barren lands of the lesser Sai to the ancient ruins of Shurima. When he had arrived in Icathia, he came across a ragged abyss, opening his unsteady mind—and the Void answered.

There, its strange and unknowable energies saturated Malzahar’s mind, helping him find his purpose in life.

Malzahar returned to the people and shared the Void that would gladly embrace them.

And that he’d become the herald of the world’s salvation.

Malzahar’s kit allows him to clear minion waves in the lane phase with ease while safely inflicting large amounts of damage during team fights.

Malzahar’s Voidlings and Malefic Visions can also deal large amounts of damage over time. Plus, he excels at poking and inflicting heavy damage throughout the entire fight.

Here’s a closer look at Malzahar’s unique set of skills and abilities:

If Malzahar hasn’t taken any damage from opposing enemy champions or is affected by crowd control in the last 12 to 30 seconds, he’ll passively receive Void Shift.

When activated, Malzahar will open two portals to the Void at a target location that are 200 units away from each other opposite to his facing, granting sight of the area that’s in between the portals.

After 0.4 seconds, all enemy units between the portals will receive magic damage and are silenced for a certain period.

Passive: When Malzahar casts abilities, he’ll gain a stack of Zz’Rot Swarm, which has a maximum of 2 stacks.

Active: When casting Vois Swarm, Malzahar will consume all Zz’Rot Swarm stacks, and after 0.5 seconds, he’ll summon a Voidling at a target location.

Additional Voidlings will then be summoned for each Zz’Rot Swarm stack Malzahar consumes.

Voidlings can deal magic damage with their attacks, which is reduced by 50% against epic monsters and increased by 200% against enemy minions.

These stats are only applicable if Malzahar’s Malefic Visions has infected these enemy units.

When activated, Malzahar will infect the target enemy unit’s mind, inflicting continuous magic damage over 4 seconds, refreshing upon damaging them with Call of the Void or Nether Grasp.

If the target enemy unit dies while infected with Malefic Visions, they’ll spread onto the closest nearby enemy unit while Malzahar restores 2% of his max mana.

Malzahar’s Ultimate lets him form a tether on an enemy champion. This will knock them down while Malzahar channels up to 2.5 seconds.

He’ll then suppress and reveal the target enemy, inflicting them magic damage every 0.25 seconds.

Malzahar will continue channeling as long as the tether doesn’t get broken, even if the suppression gets removed.

Additionally, Nether Grasp opens up a “Null Zone” beneath a target’s location at the time of casting that lasts for 5 seconds, inflicting magic damage every 0.5 seconds to all enemy units inside.

Malzahar is an agile but heavily damage-focused champion that summons Voidlings to fight with him in his battles, swiftly taking down his foes.

If you’re able to master Malzahar’s rapidly-paced gameplay, you’ll be able to help your team regardless of the matchup.

Here are a few tips and tricks to help you master Malzahar’s playstyle in no time:

You can also check Morgana!