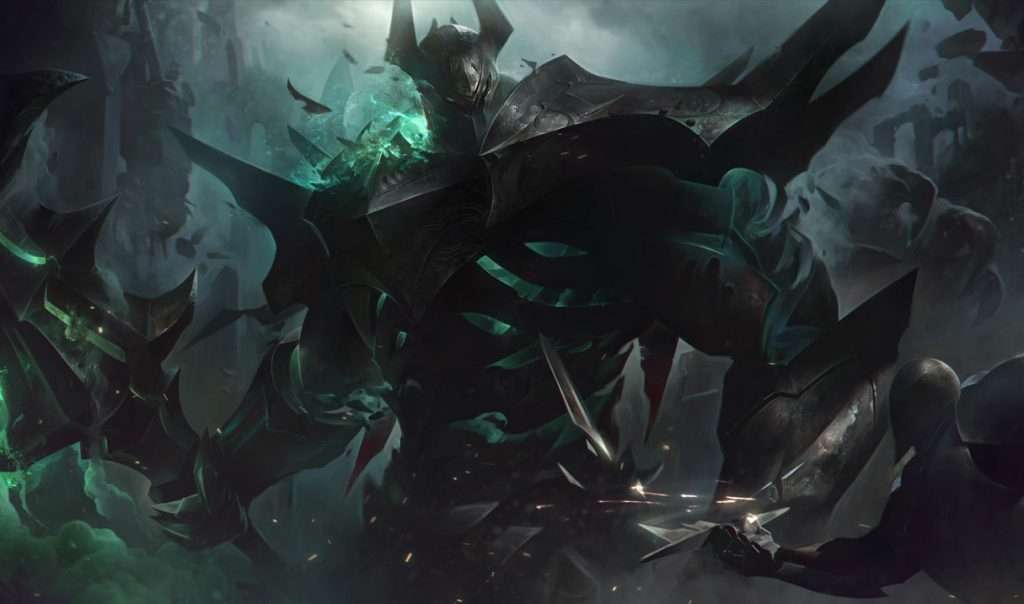 Mordekasier is an AP juggernaut champion, making him tanky and durable, perfect for aggressive gameplay. He was once a fierce warlord named Sahn-Uzal.

Mordekaiser is a fierce warlord from a foregone era, using necromantic sorcery in binding souls into an eternity of servitude.

Although few remember Mordekaiser’s earlier conquests or know the actual extent of his powers, there are still ancient souls that remember him.

These individuals still fear the day when Mordekaiser returns to claim dominion over both the land of the living and the dead.

In the previous era, a fierce warlord named Sahn-Uzal ran tyranny throughout the northern wildlands, and when his mortal life ended, he found no halls or glory awaiting him.

Instead, the tyrant stood in empty wastelands, covered in ethereal fog and plagued by harsh whispers.

However, the stubborn warlord refused to fade.

Over time, the whispers crystallized into words he could comprehend, where he learned his spirit name in Ochnun was Mordekaiser.

There, he started his second conquest of the mortal realm—invading lands by using his necromantic sorceries to seize control of the armies mortals had raised.

However, such tyranny only brought him enemies, casting him out of the material realm. In a once-empty wasteland, Mordekaiser forged a new empire, giving new life to those who died under his latest reign.

Centuries have passed, and Mordekaiser’s name is still whispered by those who study ancient histories—fearing the day of when he’ll come back.

Mordekaiser boasts the perfect balance of durability and damage even though he builds AP items, but with such flexibility in his kit, Mordekaiser can be a fantastic champion to main.

Here’s a closer look at Moderkaiser’s skills and abilities:

Damaging basic attacks and abilities grant Mordekaiser stacks for 4 seconds for every enemy monster or champion he hits, stacking to a max of three.

Innate: Indestructible’s passive effect lets Moderkaiser store 35% of the post-mitigation damage he inflicts and 15% of the damage he takes in. Plus, his Potential Shield on the secondary resource bar, up to 30% of his max health.

Indestructible’s Potential Shield decays 8 to 25 every second after not inflicting or receiving damage for one second, down to a minimum of 5% of his max health.

Active: Indestructible lets Mordekaiser consume his current Potential Shield in shielding himself for 4 seconds for the same amount. The Potential Shield will decay slowly but speeds up near the end.

You can recast Indestructible after 0.5 seconds while the Potential Shield is active.

When you successfully recast Indestructible Mordekaiser will consume his remaining shield and heal for a percentage of the shield amount.

Active: When casting Death’s Grasp, Mordekasier will summon a claw in a target direction, granting sight of the area and, after 0.5 seconds, inflicts magic damage to all enemy units within, pulling them 250 units inward.

When casting his ultimate, Mordekaiser will slow target enemy champions by 75% for a split second. After the slow they’ll be banished together with Mordekaiser to his Death Realm for 7 seconds.

Enemy units between realms can view one another as spirits, negating interactions. Only the targeted enemy champion and Moderkaiser can enter the Death Realm.

For the same 7-second duration, Mordekaiser will consume the target enemy’s soul, reducing their current AD, AP, attack speed, max health, size, and armor and magic resistance by 10% while gaining these all for himself.

However, if the enemy champion dies inside the Death Realm, Mordekaiser will keep some of their stats until the enemy respawns.

Additionally, if one of the two affected enemy champions leave the Death Realm because of them dying or the skill getting dispelled, the other will be affected as well.

Mordekaiser is one of the few AP juggernauts in League of Legends, boasting no mana casts, helping him excel at taking foes to his Death Realm—making him the perfect champion for 1v1.

When you choose Mordekaiser with the right team composition and play him strategically, he can become an unstoppable tank, even if he’s not the most overpowered in the game.

The following are tips and tricks to help you master Mordekaiser’s unique playstyle:

You can also check Malphite!