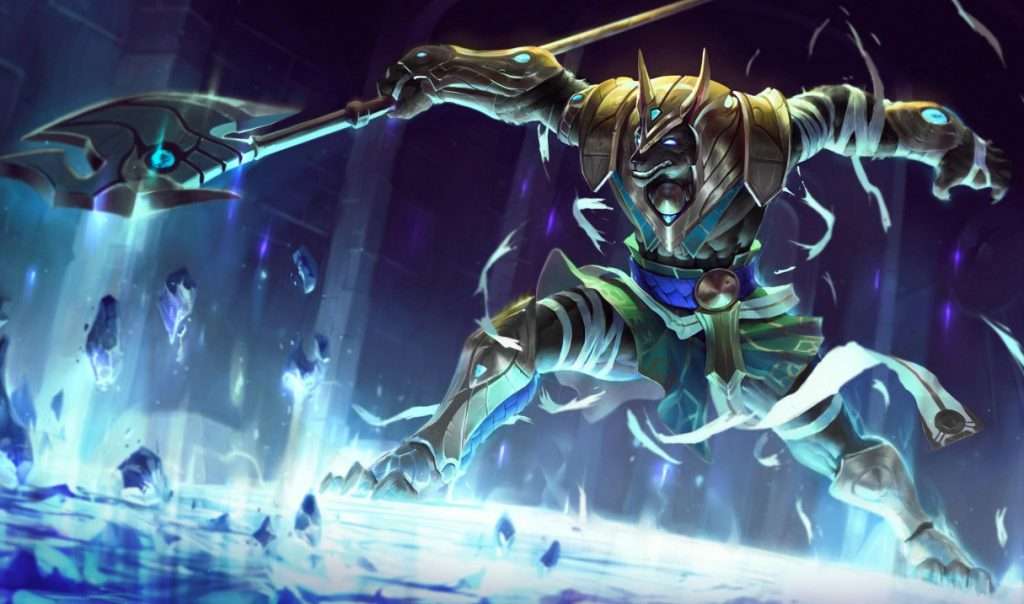 Nasus is a jackal-headed Ascended being from Shurima. He was a guardian of knowledge and a peerless strategist. As a heroic figure, he was regarded as a demigod by the people of the desert. He was a voracious student, fiercely intelligent who memorized and critiqued the greatest works of Shuriman history and philosophy before he turned ten.

Nasus had a brother Renekton who tended to wear quickly and fight with other local children. Although they do not share the same passion, the brothers were close to one another. Nasus kept an eye on his brother, making sure he didn’t get into too much trouble.

When Nasus came of age, he got in and was welcomed into the prestigious and exclusive Collegium of the Sun. Having the best teachers in the empire, Nasus developed a wide understanding of military strategy and logistics and became the youngest general in history. As a genius and a competent soldier, he used his skills more in planning and not in fighting battles. Check Out: Lol Games

Nasus was known to be a deeply empathetic man who always took his responsibilities seriously. He always made sure that his soldiers were well provided, paid on time, and fair treatment was observed. Through his guidance, the emperor’s military were able to win countless battles against their mortal enemies, and he gained more respect from the people who served beneath him. Also, under his command, his brother Renekton joined the military service, rising through the ranks as a trusted warrior. He became the youngest to become general. However, despite triumphs and accolades, Nasus was not fond of war. He did understand the importance of war in the rapid expansion of their empire, but he firmly believed that the greatest contribution was the knowledge they could collect and preserve in the event of each conquest. Through his urging, all the books, scrolls, and teachings of the defeated cultures were added to the libraries and repositories all over the empire to bring wisdom and enlightenment to generations still to come.

Decades of dutiful service had passed, and a terrible wasting sickness, unfortunately, struck Nasus. His physician informed them that he would be dead in a week. The people of Shurima were bereaved because Nasus was a great general, their brightest star who was beloved by all. The emperor pleaded with Setaka of the Ascended Host for the general’s deeds to be weighed before the Sun Disc. After a day and night, it was confirmed by Setaka’s emissaries that Nasus would be blessed with Ascension. Despite his infirmity, he would need to undergo the rituals at once.

His brother Renekton, now a war leader, headed home to be with Nasus. He couldn’t believe that his flesh was wasted away, and his bones are fragile as glass. He was so weak that as the Sun Disc’s golden light flowed over the dais, he was not able to ascend the last steps into its light. Because of his love for his brother, he carried Nasus onto the dais to accept the oblivion.

However, Renekton was not destroyed; instead, both of them emerged as god-warriors. Nasus stood a towering, jackal-headed avatar of strength and wisdom, while Renekton was a muscular behemoth with the head of a crocodile.

Nasus had been gifted with powers beyond mortal understanding. The greatest blessing of his Ascension was the countless lifetimes he could spend studying and contemplating.

Though his ability was a great advantage, it eventually came to be his greatest curse. However, he was more concerned by the savagery he saw with Renekton. At the relief of Nashramae, bringing the city under Shuriman rule, Nasus learned that his brother razed the library and massacred all who stood against him. They faced each other and almost came to bloodshed, drawing weapons against each other. But with Nasus’ stern gaze, Renekton’s blood lust dwindled and turned away.

The rebel state of Icathia changed many of the Ascended. And Nasus spent time studying and trying to understand what had happened to their empire.

Empowers Nasus’ next basic attack. If it kills the target, Nasus gains three stacks, and if the target is a champion, minion, or large monster, increases to 12. Siphoning Strike’s damage increases with every stack that Nasus gets. This skill resets Nasus’ auto-attack timer.

It ages the target enemy champion for 5 seconds and slows their movement speed by 35% up to 95% after 5 seconds. The enemy’s attack speed is slowed by 17.5% and goes down further to 47.5% by the end of the duration.

Nasus unleashes a spirit flame and creates a flaming zone dealing magic damage to enemies in the area.

Enemies in the area will also have their armor reduced by 25-45% while still in the area.

Fury of the Sands

Nasus becomes empowered, gaining bonus health, armor and magic resistance. It also increases Nasus’ size by 30% and grants bonus range on his basic attacks for a duration. While he is empowered, he deals magic damage of 1% per 100 ability of power, maximum of 240 per second, and Siphoning Strike cooldown is halved.

Nasus can be played as Fighter, Tank and Mage. He often excels in the top lane and in the jungle. Pay close attention to using Siphoning Strike because it has a big impact at the end of the game. When playing alone in a lane, use Spirit Fire to farm. However, try not to push too far. Try to balance between Siphoning Strike and AoE farming. Buy survivability items in your DPS builds.