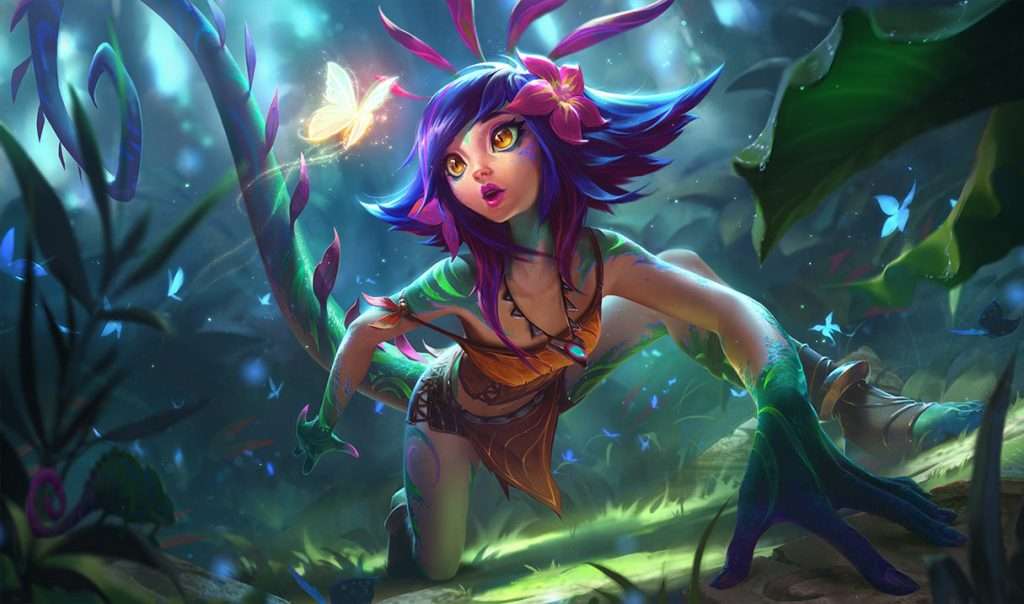 Neeko is known as the curious chameleon, a shapeshifter who came from the long-lost tribe of Vastaya. Neeko views the world with an endless curiosity and wide eyes who always watch for something new. At first glance, she may not seem dangerous, but keep an eye on Neeko because things are never as they appear.

Neeko can blend with any crowd by imitating the appearance of others, even absorbing their emotional state to turn into a friend from foe quickly. No one is sure who Neeko is and where she might be, but those who plan to do her harm will witness her true colors soon. You can experience Neeko’s full power, especially her primordial spirit magic being unleashed with the enemies.

Neeko was born on a large and remote island, to the east, where the last clan of the ancient Vastayan tribe stayed isolated from the world. They were called the Oovi-Kat, and trace their generation lineage back to the legendary Vastaya ancestors.

The Oovi-Kat were peaceful beings with unrivalled potential. They have a harmonious community blended with their spiritual realm so that their Sho’ma or the spiritual value could intermingle with other beings through proximity. It can even help them imitate other physical beings. No mystery existed between the Oovi-Kat ancestry, but some were as resilient, curious, and energetic as young Neeko.

Neeko improved her fondness for games and in hiding trinkets. She has an inquisitive nature with no bounds, and she was innocent and pure in her charming existence.

But her charm was not to last because cataclysm loomed on the horizon.

Thanks to the self-sacrifice and quick thinking of Oovi-Kat elders, Neeko escaped the death of her homeland. She took the form of a bird and fled the destruction, feeling all the screams heard from people fading into the gulf of realms.

After several days, exhausted and desperate, Neeko fell into the sea and clung to driftwood with the mercy of the currents until a silhouette rose into view. Neeko could hear different voices from the waves, and she swam toward the strange place.

With her last strength, Neeko crept aboard what turned out to be a strong vessel destined to Harelport. She rested while she could, calling out the realm of the spirit for her lost tribe. Neeko felt scattered, lonely echoes in response and an image of the dead, towering trees that lay somewhere over the horizon.

When champion Neeko emerged out from the ship to the city, it was an unfamiliar and strange world. All her senses tingled. Several creatures, even from Oovi-Kat, might be scared in that scene, but not Neeko. Society is described with unique characters, strangers with a vast array of shapes and motives. It was a location of countless experiences and stories, and it entered her ultimately.

Before Neeko could get far, she was seen by a Vastayan sailor known as Krete. She could not understand all his words, but he wanted to know which tribe she belonged to. Neeko learns how to reach out with her Sho’ma, imitating his expression and face to make her intentions purely understood, but the Vastayan sailor Krete didn’t seem to like it. Neeko fled into the crowd, altering her shape several times and overwhelmed by his darkening thoughts until she escaped.

Surrounded by tropical and lush greenery in the hinterlands beyond the Harelport, Neeko grasped with her recent experiences. She could not comprehend how someone relies solely on words as their form of communication. It’s limiting them to converse more.

Looking for solace, Neeko took the shape of the jungle cats she faced among the trees and tried to run with them. Neeko loves being agile and fast, and the bright, keen eyes reminded her of her roots until an unexpected leader transformed into a strong, dark-haired, and beautiful woman named Nidalee, who accepted Neeko into their group.

Neeko hesitated to tell the truths about Oovi-Kat to other beings, but she felt a deep connection with Nidalee. She thought that this huntress might share the forgotten kinship with the Vastayan ancestry. The friendship between Neeko and Nidalee blossomed, and for several months they roamed the wilds together.

But the cities and towns, with all their flaws, still reached out to Neeko. Her ancestral tribe came to her through dreams, showing her the sad branches of dead trees over and over again. It seems that the trees need colors to bloom again. Neeko was sure about that and asked her new friends to join her on this new journey, but Nidalee could not do it. However, Neeko was determined and set out alone.

Neeko’s old life and the Oovi-Kat may be lost somehow, but Neeko visualized a more magical future, a broader tribe of like-hearted yordles, humans, Vastaya, and other beings willing to share her dreams. As far as Neeko is concerned, everybody has the potential to look for a better place in her new tribe. She pledged to find the souls out and befriend them, defend their Sho-ma, even if it means risking her life.

Neeko can mimic others and disguise herself to look like an ally champion. Taking damage from the enemy champions or using Tangle-Barbs or Blooming Burst breaks the illusion and puts the ability on cooldown.

Neeko has the ability to propel a seed into her target, which blooms and damages enemies. If the burst damages a prominent monster champion or kills an enemy unit, it will bloom up again, this cannot happen more than twice.

Each basic attack on the third level resonates with spiritual power and energy, dealing magic damage, which will briefly maximize Neeko’s moving speed. She can quickly slip out of the enemy’s sight and becomes invisible, granting her movement speed and bringing a temporary clone of her usual form to the chosen location.

Neeko can sling a magical spiral into a specific location, briefly rooting and damaging the enemies it passes through. Enemies hit after the first Tangle-Barbs will be rooted longer. If Tangle-Barbs roots at least two enemies, it grows in speed, size, and duration.

Neeko starts charging herself with magical and spiritual essence. But later on, she can leap into the air, gaining her shield. Slowly, the surrounding enemies release the energy while landing in an essentially damaged area and stun the enemies. When used with her disguise ability by Inherent Glamour, the enemies will not see Neeko as she charge-up.

As Neeko, you are able to slip into the skin of your allies while bewildering enemies and surprising them with a burst of colorful spiritual magic. Tripping up foes, you will encounter Tangle Barbs, rooting within the sorrowful petals of Blooming Burst over and over again. When you are set to look for an appearance of an ally, it will scurry off to a new encounter.

Once you become curious about your startling foes into action, you can use a mimic from Shapesplitter to keep the enemy confused while repositioning and preparing a special surprise. If you are ready to show it was you all along, you can jump into the fight using a prismatic Pop Blossom and leave them all stunned.

Neeko’s tricks can change as she does. But, here are some ways to utilize the shapeshifting spiritual magic of the Inherent Glamour.