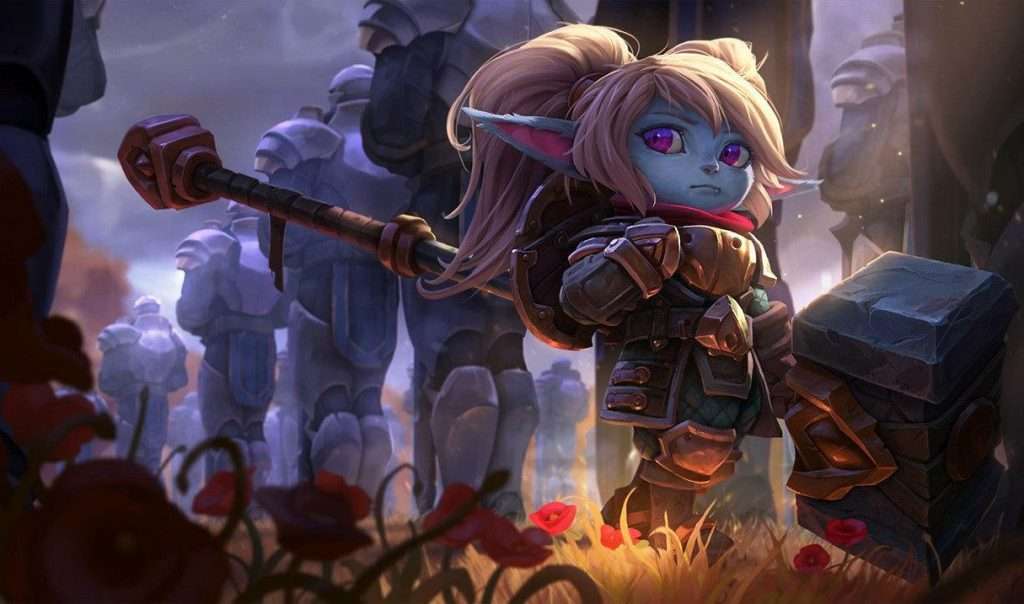 Runeterra is home to valiant champions but few are as tenacious as Poppy. She carries with her a hammer twice her height. She spent numerous ages searching for the “Hero of Demacia,” a legendary warrior who was believed to be the legitimate wielder of her weapon.

According to legend, this hero is the only person who can unveil the full power of the hammer and lead Demacia to great victory. Even though Poppy has searched through the furthest corners of the Kingdom for this amazing fighter, her quest has borne no fruit. Every time she attempted to pass the hammer to another hero, the ending was always disastrous, resulting in the warrior’s death. Many would have abandoned the task long ago, but most people do not have the pluck and resolve of this legendary heroine.

Poppy used to be considered a very different yordle. She had been in search of a purpose as far as she could remember. Feeling different due to the chaotic whimsy of other yordles, she chose to engross stability and structure where she could find it. This urge brought her to the human settlement of western Valoran, where she looked in wonder at the caravans passing through the countryside in an endless file. Although some people looked tattered and weary, they were in pursuit of some ephemeral better life that might be hiding just beyond the horizon.

However, one day, a different kind of caravan passed through. Those people passing through looked like they were moving with purpose, unlike the other travelers. They woke up at the same time in the morning through the sound of a watchman’s horn. They ate their meals together every day at the same time and finished within a few minutes. They set up and took down their camps with exceptional efficiency.

Yordles were using their innate magic to create ordinary things. These people attained similar bewildering achievements through their coordination and discipline. They moved in synchronization, moving like the cogs of a gear, turned into something much larger and stronger than any single human could ever be. That was more astounding for Poppy than all magic in the world.

While hiding, Poppy watched the camp. What caught her eyes was the armor emerging from the tent. The group’s commanding officer came out wearing a brigandine of shining steel plates, overlapping and each of which was an integral part of the whole. She heard that his name was Orlon and his presence affected each one of the troupe.

As Poppy made her way for a closer look, she realized that she was following the gleaming commander, like she was drawn to him by fate itself. Poppy studied Orlon as he led his soldiers in training routines. Orlon was not a huge fellow, but he swung his enormous hammer with shocking fervor. During the night, Poppy was listening carefully to his discussion with the elders of their group. She heard their plans to pull up stakes and head west to create and build a permanent village.

Feeling the connection with Orlon, and with her mind filled with questions of where he was going, where did he come from, how did he create this meticulous band of travelers, and of there was a place for yordle in it, right at that moment, she decided to reveal herself to a human. The revelation was filled with as many questions from Orlon to her as she had many questions for him. However, later they became inseparable. He became her mentor, and she became a devotee to his cause. On the training grounds, she was a great sparring partner who was unafraid to strike him. She was never slavish; she asked him questions on his decisions like an innocent child. She didn’t know she should humanly follow orders. They went to the new settlement site, which will be called Demacia. In this nation, everyone was welcome, regardless of station or background, as long as they contributed to the good of the community.

Orlon became the beloved one throughout the Kingdom. He always bore with him his hammer on his back, and it became a revered icon for the fledgling nation. It was said to have the power to destroy mountains and shred the earth itself asunder.

While on his deathbed, Orlon passed the hammer to Poppy with his hope of enduring the Kingdom. By that time, he told Poppy that the weapon was not intended for him. He said that the hammer was meant to go to the Hero of Demacia, the one who could keep the nation whole. As he drew his last breath, Poppy promised him to find the hero and place the weapon in his hands. But what never occurred to Poppy was the idea that she might be the hero Orlon described.

Iron Ambassador. When Poppy throws her buckler, her next basic attack, it bounces off the target. It gains her bonus range and deals bonus magic damage. She can pick it up to make a temporary shield. If Poppy kills her target with her buckler, she immediately gets shielded.

Hammer Shock. When Poppy swings her hammer and smashes the ground in front of her, it creates a zone that deals physical damage to enemies struck within, slowing them down and exploding after a delay dealing additional physical damage.

Steadfast Presence. Poppy gains Armor and Magic Resist. This bonus magic increases when Poppy is low on health. She can stimulate Steadfast Presence to receive movement speed and create an aura around her to stop her enemy from coming around. If a dash is stopped, the enemy is slowed down and grounded.

Heroic Charge. Poppy dashes to the target location and deals physical damage to the enemy by pushing it back. Pushing the enemy into a wall will stun them.

Keeper’s Verdict. Poppy exhibits a hammer strike that can knock the enemies from very far away. The shockwave travels in the direction of the enemy until it collides with them. Enemies struck by the hammer’s shockwave are dealt physical damage and knocked back a massive distance towards the enemy’s fountain.

What is Poppy LOL?

Poppy is a Champion from the Poppy League of Legends video game. Poppy is an In-game character that can “Poppy Ultimates jump” and use Poppys “paragon of demacia”. Poppys abilities are Poppys Harpoon ability, Poppys Heroic Charge, and Popper Basic Attack which damages enemies with her hammer.

How old is Poppy in League of Legends?

Poppy is a 26 year old Champion from the Poppy League of Legends video game and Poppelye (age) in Popper years. She’s an In-game character that can “pop” and use her Paragon of Demacia. Her abilities are her Harpoon ability, Heroic Charge, and Basic Attack which damages enemies with her hammer.

How strong is Poppy LOL?

Among the 128-strong League of Legends champion roster Poppy stood out for all the wrong reasons. Her pick-rate was one of the lowest in the game and in the few instances when she was selected her win-rate was stultifyingly low.

What's the biggest misconception about Poppy?

That she’s just another aggressive, hyper