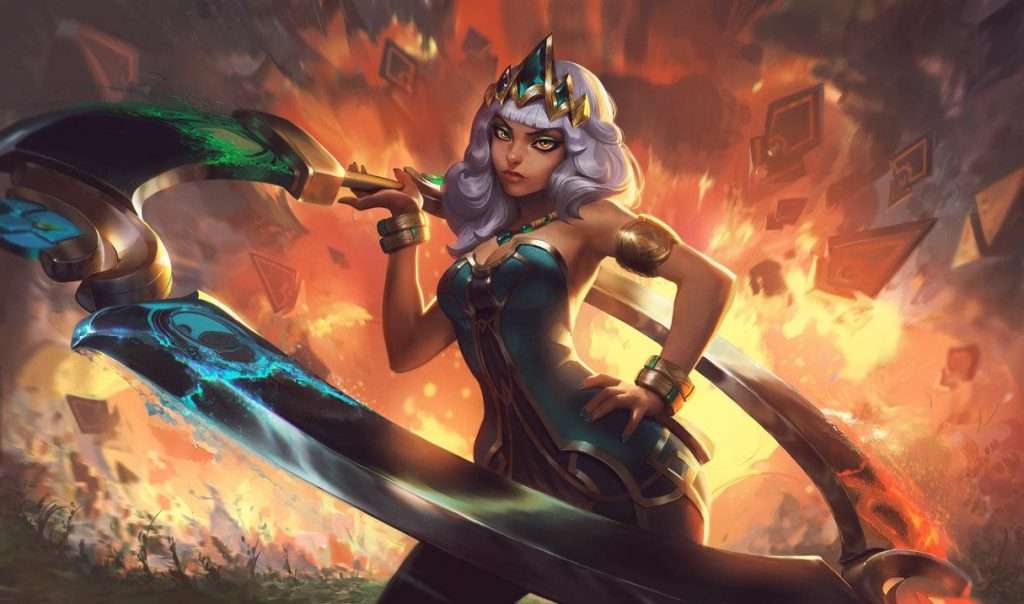 A couple with ten children governed the jungle city of lxaocan. It is a city-state hidden in the depths of the jungles of lxtal. The nine children are trained to succeed their parents, so the parents raised and schooled them in the proud traditions of their isolated nation.

Qiyana was the last in line as the successor of her parents, so she schemed her own vicious path to the highest seat of the Yun Tal. She faced anyone who would stand in her way with a bold spirit and unparalleled command over elemental magic. She believed she deserved to rule not only a city but an empire.

Qiyana was the youngest child of the ruling family. She grew up thinking she would never acquire the high seat of the Yon Tal. Assumed to rule before her, her nine older sisters received the most attention, and she often longed to find her valuable place in the family.

The place she had been longing for became apparent when the young Qiyana started to learn the ancient elemental magic of lxtal. After taking up lessons on ancient elemental magic, she realized that she was blessed with exceptional talent. As young as seven years old, she mastered the advanced ways in just a few weeks. She was so fast compared to some of her older sisters, who were yet to understand the basics after years of studying and learning.

One by one, Qiyana exceeded her sisters in terms of elemental arts, and as she progressed, she became more discontented. She wondered why her parents would waste a lot of effort in grooming her inferior and incompetent siblings. Each event where her sister was chosen to preside over a grand ritual that shrouded lxtal from the outside world, Qiyana splurged into frustration, picking fights to prove her importance and worth. Soon, the eldest among sisters Inessa, who was also the immediate successor, became the target of her aggression.

Instead of relieving the conflict, Inessa bristled because of her disrespect from Qiyana, who was twelve years younger than her. Their words against each other became more intense as they grew older. The built-up physical threats from Inessa and a provocation from Qiyana resulted in a challenge to decide who was the strongest in ritual combat and had the power to replace their parents. Her sister accepted the dare, which would happen in front of all lxaocan to witness.

When the contest was over, Inessa was not able to walk again, but Qiyana stood unharmed. She was eager to take her place as the rightful heir; however, her parents were enraged at her actions. The prize was not awarded to her as per tradition decreed that she would be the tenth in line to succeed the high seat of the Yun Tal. Although her parents’ decision was bitter news, Qiyana learned that the duel between her and Inessa had made her elemental prowess acknowledged all over lxaocan. Finally, she had found what she had been longing for, respect.

The respect had become an addiction, where she felt a burning need to be recognized for her exceptional skill. All of lxaocan should be with her standing, proud to put the world in its proper place with her powerful elemental magic. Instead, they hid from foreign explorers and miners who were pulling out the jungle on their borders.

Qiyana set out her ambitions in her parents’ court, which is to drive off miners and revive the lands. However, her parents denied the plan since the association with the outlanders would cause war, hatred, disease and jeopardize what they have been protecting for centuries. Qiyana fretted and became impatient to show the world her strength, and she was determined to prove her parents wrong.

Taking a move against their order, Qiyana invaded the mining site. She killed all the miners except one. As she saw the fear in his eyes, she decided to let him spread her message. She let him live so he would tell everyone in his Pilt-over about the grand Elementalist who ruined their mine. In lxaocan, Qiyana reaped credit for the killing, which had her mother and father infuriated. Her parents told her that the Piltovan merchants were sending their troops of fresh miners and armed men into the jungle. Because her parents would not want to risk their disobedient daughter drawing more outlanders toward their lands, they regretfully ordered her imprisoned for her crime.

While she was arrested, some elementalists of the court came to her defense. The unheard elemental talent displayed in the jungle convinced her parents that she should help them to power and defend their city. Qiyana was then released after she swore renewed fealty to her elders and promised never to cross paths with an outlander again.

A growing number of supporters and admirers threw their support behind Qiyana, wherein she finally felt her important place in the world. Holding a power stronger than tradition, she would climb the ladder of success in any way necessary. She was the greatest elementalist the world has ever known. She was the inevitable ruler of lxaocan, and the future empress of all lxtal.

Qiyana’s basic attack against each enemy deals bonus damage. When she slashes forward in the target location, she deals physical damage to enemies in a line.

Qiyana consumes her element. When she swings her weapon, it detonates in a line upon colliding with an enemy, dealing damage and allowing her to gain a bonus effect based on her element.

Qiyana dashes to a location and enthralls her weapon with an element. While her weapon is enchanted, her abilities deal bonus damage. Once Terrashape is learned, Qiyana is given the Terrain element.

Qiyana dashes towards an enemy and damages them. During Audacity, Qiyana can cast her abilities.

The windblast creates an erupting shockwave across any river or brush. Qiyana’s shockwave can detonate any element she hits it with. It stuns and damages nearby enemies.

Who is Qiyana LOL?

She is an attack damage (AD) burst assassin with high mobility and the ability to change her kit based on nearby terrain. We have early impressions and thoughts on her and how she plays in the game.

Is Qiyana a queen?

There are many Coronation Ladies who are Queens of Ixtal. Qiyana is the youngest in the line of sisters who have been Queens of Ixtal for most of the recent Coronations. She has been waiting patiently for her chance to take the Crest.

What race is Qiyana?

QIYANA is a humanoid character. Q QIANYA’s race has not been confirmed by Riot Games. Q QIANYARace could be anything from human to robot

How old is Qiyana league?

Qiyana is twenty years old. She was seven when she learned advanced elemental techniques.

What is Qiyana ULT?

Qiyana creates a shockwave that knocks back enemies and stops when it hits a wall. If a river, wall, or brush is hit by the shockwave, they will explode, dealing physical damage to nearby enemies and stunning them.