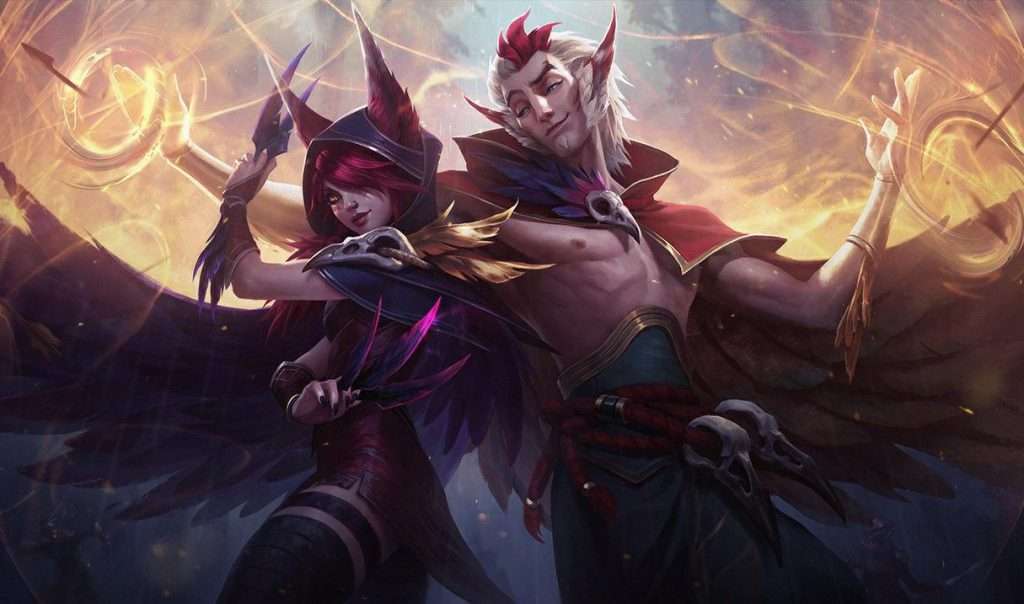 As one of the oldest Vastayan tribes in existence, Lhotlan once lived on the ancient and mystical borders, which were the deep forests of Ionia, on the eastern island of Qaelin. At Ionia, time had no meaning and magic breathed like air. For Lhotlan, the lands of mortals were an unforgiving desert, without magic, and kept intruding into the vastaya’s territories.

Rakan was known to be mercurial, charming and at the same time an infamous vastayan troublemaker and the greatest battle dancer in the tribal history of Lhotlan. For mortals, his name was synonymous with wild festivals, out of control parties, and anarchic music.

Rakan was born into a tribe in decline, but he never gave up hope. He watched the human lands expand their territory, obstructing the flow of Ionia’s wild, mayhem magic for their own safety. Many tribes tried to negotiate with them, sending their emissaries to secure treaties and to protect the mystical energy the tribes needed to grow. However, these promises were broken

Disillusioned, vastaya tribes became increasingly isolationist, clinging to their remaining lands. However, Rakan prefered a different path. He believed that he could convince the mortals to allow wild magic to run free, open their eyes to see and appreciate its beauty. Because of this, he was tagged as mutakl, an unloyal, human sympathizer, and collaborator.

Then, Rakan left the Lhotlan tribe to spread the song of his people all over Ionia. He became an entertaining rogue, and a welcome performer at different taverns or village carnivals. And over the years, he realized that was all he was to mortals, nothing more no matter how many dances and songs he performed. Although he gave his all to entertain the crowds, he barely provided diversion to drunk revelers.

Rakan became restless, as he thought of himself without purpose. The thought changed when he met Xayah at the harvest festival in Vlongo. She was also a Lhotlan. Upon seeing her in the crowd, he was inspired to sing one of his old songs that enchanted the entire town with his gleaming plumage. There were countless human and Vastayan women who had fallen for Rakan in the past, but this violet raven seemed used to his charms. However, she seemed not uninterested.

It was a puzzle with almost no possible answer. Curious to what happened to his homeland, he asked Xayah about their tribe. He was told that Lhotlan had lost the last of their lands and it made him furious with rage. His reaction impressed Xayah, and she shared with him that there was still hope. She confessed that she was part of something greater, a rebellion that will take back what vastaya had lost. Not only for Lhotlan but for all the tribes of vastaya.

Rakan was astounded, it was his chance to redeem his people, a principle he was willing to lose his life for. He beseeched Xayah to allow him to accompany her, to which she agreed in a condition that he should carry his weight.

Xayah soon learned that Rakan’s dances were great and impressive in battle as they were on stage. He pronounced himself as the greatest battle-dancer in Lhotlan history, although he sounded boastful, no one could refute it. His grand entrances and entertaining acrobatics distracted and fazed their enemies, until Xayah felled them with razor-sharp quills. Rakan and Xayah fought together with uncanny harmony, no matter how dangerous the situations were.

While traveling, Rakan became fascinated with how Xayah dealt with the world. She was always prepared, aloof, and focused, which was very opposite to him who was absent-minded, affable, and lacked focus. Rakan often forgets Xayah’s laid plans but he made up for it using his ability to read the emotions of others. Even though they are different from each other, they have achieved great feats because their strengths complement the other’s weaknesses.

Later, Rakan could not imagine life without Xayah, as Xayah was without him. They pledged themselves to each other in the middle of a screeching tavern brawl. However, they don’t have eyes for everything. While Xayah saw the world black and white, with mortals always the enemy, Rakan was more compassionate, and believed that some of them can be redeemed. Despite this difference, he was certain that their love for each other would guide them through the storms that may come their way. They both travel to preserve Ionia’s magic from the control of humans. With Xayah, Rakan found his purpose. Inspired by his partner’s principles, he made them his own, and together they fought to reclaim the First Lands for the vastaya.

Rakan gains shields from time to time that lasts until broken. If the shield is damaged but not destroyed, it will be restored to maximum value after being out of combat for 5 seconds.

Rakan flings his magical feather forward, dealing magic damage to the first enemy hit. If Rakan hits an epic monster or a champion, a circular area is marked around Rakan where he can heal himself and his allies that are around the marked area.

Rakan dashes to a location, knocking up nearby enemies on his arrival. After a dramatic pause, he leaps to the air dealing magic damage to nearby enemies.

Rakan leaps to an ally champion, it grants them a shield for 3 seconds. Battle dance can be re-cast for free for a short duration knocking up enemies for a second. But Rakan may select the same target again.

Rakan empowers himself, gaining movement speed and charming enemies he touches and deals magic damage. This may only affect the enemy champion once.

Rakan’s presence provides significant advantages for his allies, but he needs them to make use of these advantages. Rakan’s dash speed is increased depending on his movement rate. Take advantage of your increased mobility to surprise your opponents.

Rakan’s movements reveal his ultimate destination. Take advantage of this to the fullest extent possible. Rakan suffers from poor mobility when he is alone. The best way to take him out is when you catch him without any allies.

A good combo would be to wait for Fey Feathers to activate, enter with Grand Entrance, use Gleaming Quill for a quick hit on an enemy champion, and then close with Battle Dance to escape. This quick series is difficult to counter.

Battle Dance is best done to get to Xayah. It does not have the same range when used with other allies.

The Quickness provides a quick burst of speed, when needed. It can be used to hit an opposing champion or to escape. You can also use The Quickness to lure opponents to follow you. You can then charm your pursuing opponents while teammates pounce for the kill.

A novel way to get into the fray would be Battle Dance, immediately followed by Grand Entrance. This would be a more effective surprise attack with Xayah present.

What is the best type of Champion to play against a Rakan?

One that can out-skill him or avoid being charmed.

What does Rakan Means?

What type of champion is Rakan?

Rakan is considered to be an assassin/fighter champion in league of legends due to his reliance on getting close to enemies and using his abilities for burst damage. He can also build different tanky items depending on if he wants more survivability or not.