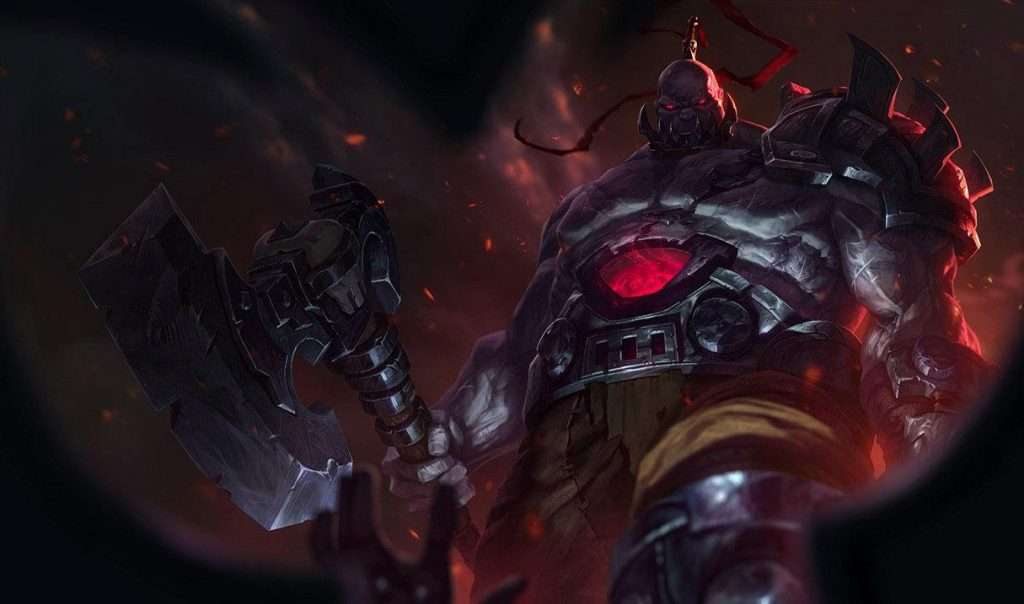 Sion lost all sense of humanity and indiscriminately killed anyone who dared to cross him. His cruel act demonstrated that he no longer retained any semblance of what it felt like to be human. Even though crude armor bolts were bolted onto rotten flesh on top of an already decomposing corpse, this undead warrior continues to charge into battle without hesitation or remorse. After years of fighting as nothing more than pure rage personified, Sion struggles between swinging maddeningly at anything that moves while struggling not to shy away when flashes from memories long since dead resurface one after another.

Sion’s death is not the end for him. His spirit will return, but in a decaying state of health and with an increased need to attack quickly or risk disappearing forever. Raw power and urgency keep Sion alive during this phase as he relentlessly chases down living beings that dare cross his path while Glory In Death is active! While the ability lasts only for 60 seconds (unless it expires before), during this time, he can regenerate himself to full strength without using any abilities other than Death Surge. It replaces all of them when activated by Rage Mode or Fury Stance.

Sion charges a decisive swing in front of himself that will send enemies flying at release. If he builds up enough power, the attack can be charged to stun and knock up his opponents for an extra second and deal additional damage after they land.

Sion has a shield that can be activated after 3 seconds and deals magic damage to enemies nearby. Sion gains maximum health when he kills an enemy, but his shields take longer than usual to recharge in the meantime.

Sion’s short-range shockwave deals a heavy blow to the first enemy it hits, reducing their armor and slowing them. The blast also knocks back any minions or monsters in its path – dealing damage to all enemies they pass through and reducing their armor.

Sion charges in a direction, speeding up over time. He can steer his charge slightly with the mouse cursor location and deals damage to enemy units he collides with. When Sion collides into enemies at maximum distance from them, they are knocked high into the air based on how much of that final stretch was charged by him before impact.

ROAR OF THE SLAYER

Sion’s kit is complex and punishing, but a few items can augment it to make the champion even more potent. Movement speed will improve his potential for engaging in fights without using his ultimate. At the same time, slows allow him to land devastating abilities like Glory in Death with greater ease. There are many tanks or fighter options that work well on Sion because he excels at sustained damage; however, some good choices exist so long as they support this hard-to-kill aspect.

In the top lane, there is a high degree of success for this quick pick. It can also be played as an off-laner or support. Our first skill at level one should be Decimating Smash. Then we can start maxing out with Soul Furnace followed by Roar of the Slayer.

healing reductions and does not count towards the ‘Damage Healed’ statistic at the end of game lobby. Glory in Death has a capped 60 seconds duration. If the player manages to survive for so long, Sion dies instantly, regardless of his current health.

A fight was brutal, and it was the Demacian who delivered the killing blow. Sion dropped his axe and, with a final burst of strength, tore the king’s crown from his head with one hand, clamping the other around his throat. Jarvan’s guards stabbed Sion again and again, but his grip did not loosen.