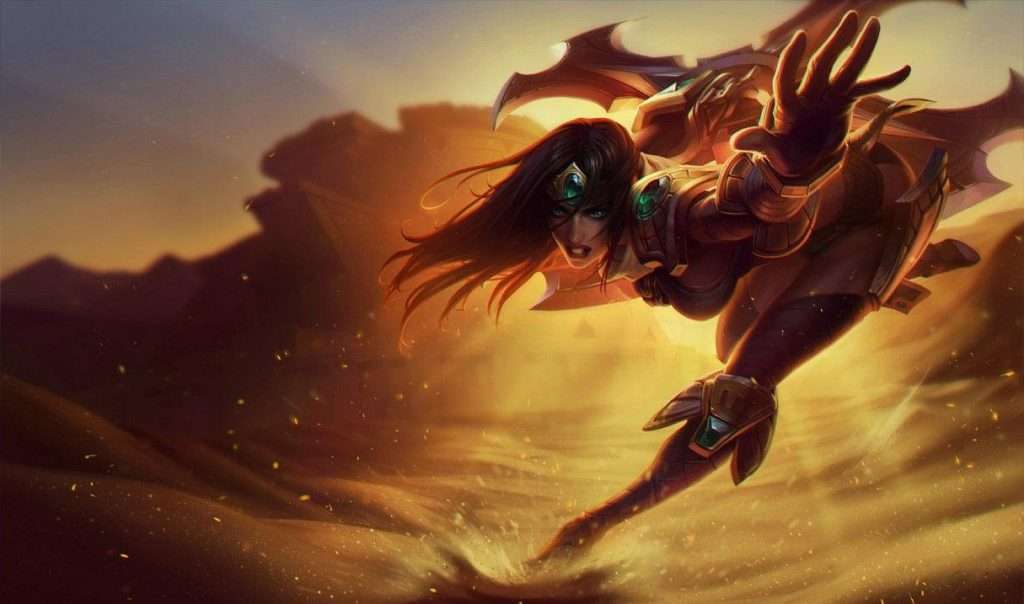 Sivir, the most renowned fortune hunter and mercenary captain in Shurima, is a woman of ambition. Known for never backing down from any fight as well as being fearless and ambitious to boot–Sivir prides herself on recovering buried treasures from perilous tombs across Shurima’s deserts. However, when an ancient force stirs at the very bones of this once peaceful land, Sivir finds herself torn between two competing destinies.

Sivir channels her strength to gain a burst of movement speed when she attacks an enemy champion. Any subsequent attack against the same target refreshes this effect, while any other abilities do not.

With her cross blade, Sivir can deal a strike every time it returns to its original point. The weapon deals the same amount of damage as when thrown. It will reset if the maximum range is surpassed or hits an enemy champion.

Sivir’s subsequent few basic attacks will ricochet to nearby targets, dealing reduced damage. The bounces can only be done once per attack, and the ability does not work if there are no valid enemies in range. Ricochets of this move cannot critically strike. Continue until they bounce off an invalid target or hit Sivir herself on their last possible contact point with a unit before bouncing away from them entirely. Also, returning to her by default position for cooldown resets at full duration. Every time it hits something new, so long as she is within its radius (or when attacking minions).

Sivir freezes the battlefield with her Spell Shield. She can cast this shield to block enemy ability. If an enemy ability is successfully blocked, Sivir will get mana.

Sivir uses her power to lead allies on the battlefield, increasing their movement speed for a limited time. Additionally, Sivir passively gains bonus attack speed when Ricochet is active.

Sivir, a League of Legends champion that is commonly played in the Dragon Lane as Carry. Sivir will mostly do Physical Damage and can deal much damage- making it one of our -Tier picks when playing this Marksman in the Dragon lane. While difficult to play at first, with practice, you will find she is very versatile.

She’s ranked 15th among our top picks for her Bottom Lane role in Patch 11.23, placing her within the B tier of our ranking system. If you’re looking to build a new bot lane or have an existing bot lane that needs to be rebuilt, she’s a solid pick.

Top Laner Sivir is currently one of the best picks for the Bottom Lane role in Season 11. She has a very high win rate, a low ban rate, and a relatively low pick rate.