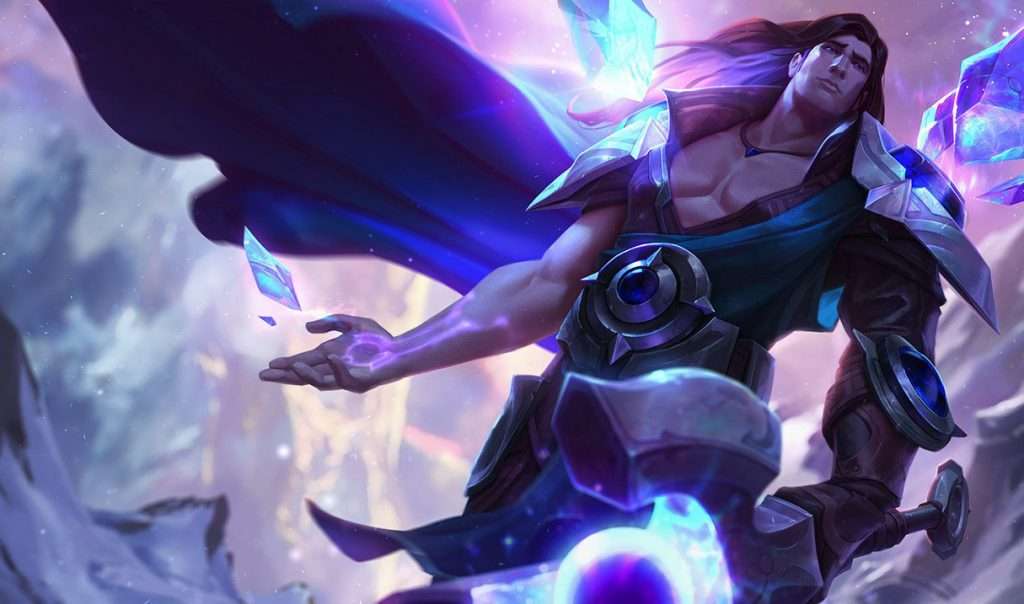 Demacia was a lawful and robust kingdom that highly valued the ideals of honor, justice, duty and had a strong cultural heritage. For its noble defenders, their daily life’s very model was focused on selfless dedication to those ideals of the king and the country. Taric, who came from one of those families, was called to uphold his family’s long lore of military service. He never fantasized of having such responsibility, but he would not define or limit exactly who and what he would protect.

Taric was a young warrior yet possessed great martial skill. During his few hours of free time, he would find ways to serve his homeland. He worked with the illuminators to take care of the sick or help rebuild homes damaged by the flood. He made use of his talents and creativity, lending them to the stonemasons and artisans who made monuments to the honor of the Winged Protector and the towering ideals it manifested.

Taric saw everyone in Demacia as beautiful, fragile, and worthy of saving. It was a work of art, a stranger’s life that made it worth fighting for. Taric’s disarming manner and innate warmth helped him brush off any criticism from his fellow soldiers and commanding officers. Fighting with a young Garen Crownguard, he was able to rise through the ranks.

However, his steady rise was about to bring him down along with Demacia. He was suddenly elevated to the esteemed Dauntless Vanguard, a far higher standard of conduct. He would not be allowed to roam the forests to look for some rare animals, ruin combat practices to sit in a tavern, and hear a bard’s simple ballad or skip line drills to ride out and perceive the night sky changes its color all over the hinterlands. Later, Taric began to feel at odds with himself and soon began soliciting attention as an insubordinate.

Garen found Taric to have the potential of becoming one of Valoran’s greatest heroes, so he encouraged him to shape up and do his duty. He should stop from thumbing his nose at fate and his country. In order to keep himself from demotion, he agreed to serve the Sword-Captain of the Vanguard, although neither of them was happy about it. However, when the older man was killed in the fight together with the rest of his personal followers, Taric left his post, and rumor spread that he had been found rambling the cloisters of some ancient and ruined temple nearby.

There was nothing that could be said. For the dozen dead warriors, it could have been that Taric met the executioner’s block for it. But while searching for mercy for his friend, Garen intervened. As a successor to the Sword-Captain, he punished Taric to endure “the Crown of Stone,” according to Demacia’s most ancient traditions. He was sentenced to climb Mount Targon, a trial that only a few had ever survived.

The Crown of Stone usually permitted the dishonored to just leave Demacia and start a new life in exile, but Taric took the first ship heading south and swore to atone for his mistake. The climb almost claimed his body and soul several times, but Taric endured the pain and pushed past the spirits of his dead confidants and other tests wreaked upon him by the mountain. As he reached the mountain peak, he was beset by a wave of new visions of loss and destruction.

He saw that the great Alabaster Library was on fire, yet he still dashed into the blazing flame trying to retrieve the heavenly poetries of Tung. Taric screamed in anger as the Frostguard ran the last dreamstag into the inferno and then desperately leaped over the precipice himself in the attempt to save it. He was at the gates of the Immortal Bastion when he saw Garen’s broken body swaying from a scaffold. Taric slumped to his knees before hoisting his shield and charged into the waiting hordes of Noxus.

When the visions finally vanished, Taric found himself with someone else at the summit of the mountain. He saw someone standing before him, wearing the shape of a man. The form was almost crystalline with blaze around or light of stars themselves, and the voice was a thousand whispers that cut through him like a blade. It spoke truths that made him realize that it was somehow he had always known. It showed him the mantle that he had unwittingly been preparing his entire life, with all his decisions and deeds that had carried him to where he was at the moment.

He would stand as the Shield of Valoran in the future wars to come. He was reborn as the Aspect of the Protector, blessed with power and purpose, which were almost unimaginable to mortals. Taric wholeheartedly accepted the new calling as the steadfast guardian of an entire world.

As the Aspect of the Protector, Taric is wielding incredible power as Runeterra’s guardian of life, love, and beauty. Shamed by his demotion from duty and ousted from his homeland, he ascended Mount Targon to find redemption, just to find a higher calling among the stars. Instilled with the power of ancient Targon, the shield of Valoran now perches ever watchful against the cunning corruption of the Void.

Bastion passively increases the Armor of Taric and any allied champion. It actively shields any ally granting them Bastion for as long as they remain near Taric. Its spells can also cast off the ally with Bastion.

Taric prepares a beam of starlight that can deal magic damage or stuns the enemies after a short delay.

Radiates cosmic energy to nearby allied champions after a delay, making them vulnerable for a short period. Check out League of Legends here!