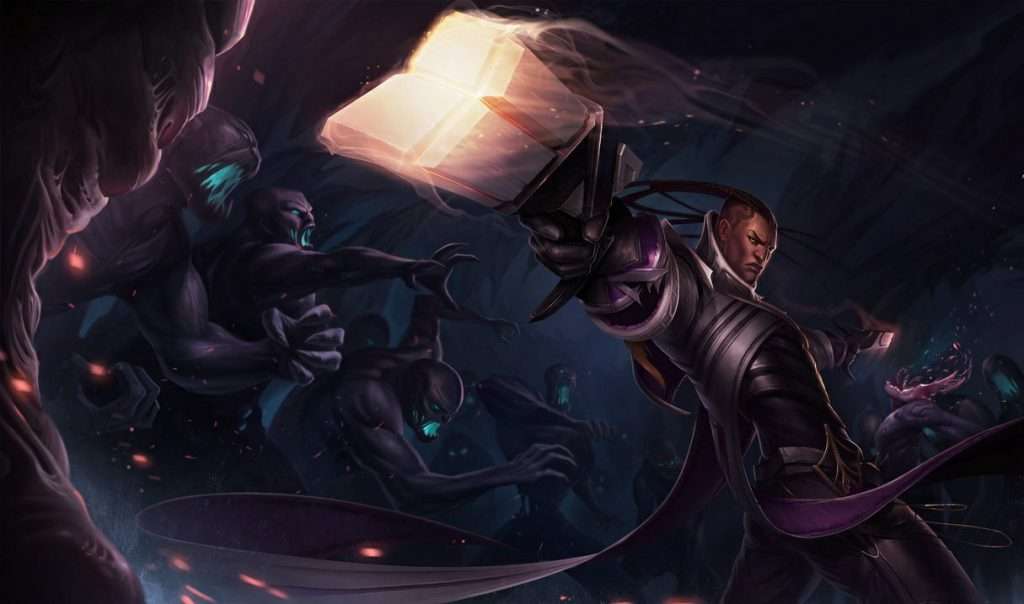 Lucian is part of the Sentinel of Light, a group of individuals defending Runeterra from the beings of the Shadow Isles.

He’s a hunter of spirits from the Black Mist, relentlessly pursuing them and eradicating them using his relic pistols. After the phantom known as Thresh killed his wife, Senna, Lucian swore revenge on the rogue wraith, embarking on the path alone.

However, even with Senna’s return to life, Lucian’s rage stays burning and his desire for revenge alive.

Ruthless and single-minded, Lucian will never stop for anything to protect Runeterra from the horrors of the Black Mist.

Ever since he was a child, Lucian wanted nothing more than to be like his father, Urias, a member of the ancient order of the Sentinels of Light, protecting Runeterra from the undying spirits of the Black Mist.

The order was initially formed on the Blessed Isles, passing down their traditions and relic weapons to people across Runeterra.

At some point in Lucian’s adulthood, he received his father’s relic pistol from Senna, a member of the order and his father’s student. Senna allowed him to accompany her to hold vigil for lost Sentinels, honoring Urias.

Lucian and Senna’s bond eventually blossomed into love—where they soon tied the knot. However, as time passed, Senna’s curse got worse, and Lucian made it his mission to find the cure.

In one of their expeditions, they came across the wraith known as Thresh, who later killed Sena. Wielding both his father’s pistol and Senna’s, Lucian hunted Thresh to avenge his fallen wife. However, when Lucian shattered Thresh’s lantern, Senna reemerged.

However, even if Senna returns, Lucian stays determined to get revenge on Thresh, as he’s confident the Chain Warden’s machinations have only started.

Lucian is a mobile and ranged champion, fighting his foes with ancient weapons passed down from the Sentinel of Light—unleashing a barrage of bullets to send opponents to their graves.

Lucian can overcome an enemy champion in duels and in-lane trades with the strategic use of his abilities.

Here’s a closer look at Lucian’s skills and abilities:

When using an ability, this passive skill lets Lucian’s next “basic attack” on-attack fire a bonus shot after 0.25 seconds of the initial shot within 3.5 seconds, dealing 50% to 60% physical damage, depending on your level.

The second shot made applies on-hit and on-attack effects and is typically affected by critical strike modifiers. Lucian automatically shoots another enemy unit nearby if your primary target enemy gets killed before firing the second shot.

When activated, Lucian will fire a laser in the target direction of enemy units, inflicting physical damage to all enemies within the line.

This active skill lets Lucian fire a shot in a target location, exploding in a cross pattern upon impact on enemy units or reaching the end of its path. It deals magic damage to enemy units hit while granting sight of the area for a second.

Passive: Each Lightslinger shot you land reduces Relentless Pursuit’s cooldown by one second. The amount is doubled to 2 seconds when it hits enemy champions.

Active: Lucian will dash in a target direction, resetting Lucian’s primary attack timer. You can cast Relentless Pursuit while The Culling and other abilities are in effect.

When casting The Culling, Lucian will channel up to 3 seconds, rapidly firing shots in a target location. Each shot from The Culling inflicts physical damage to the first enemy unit hit.

You can recast The Culling after 0,75 seconds during the channel and automatically recasts itself when Lucian’s channel ends.

While channeling, Lucian will face in the casted direction while ghosted, firing the shots in a target direction from his current position.

Lucian is a relentless marksman in League of Legends, having a habit of firing between each ability. His primary strength is his frequent use of his passive skill, reducing the cooldown of Relentless Pursuit.

If you play Lucian’s combos correctly, you can deliver a lot of damage faster than most sharpshooters in the game.

Here are tips and tricks to help you master this spell slinger’s unique playstyle:

You can also check Maokai and qiyana build.