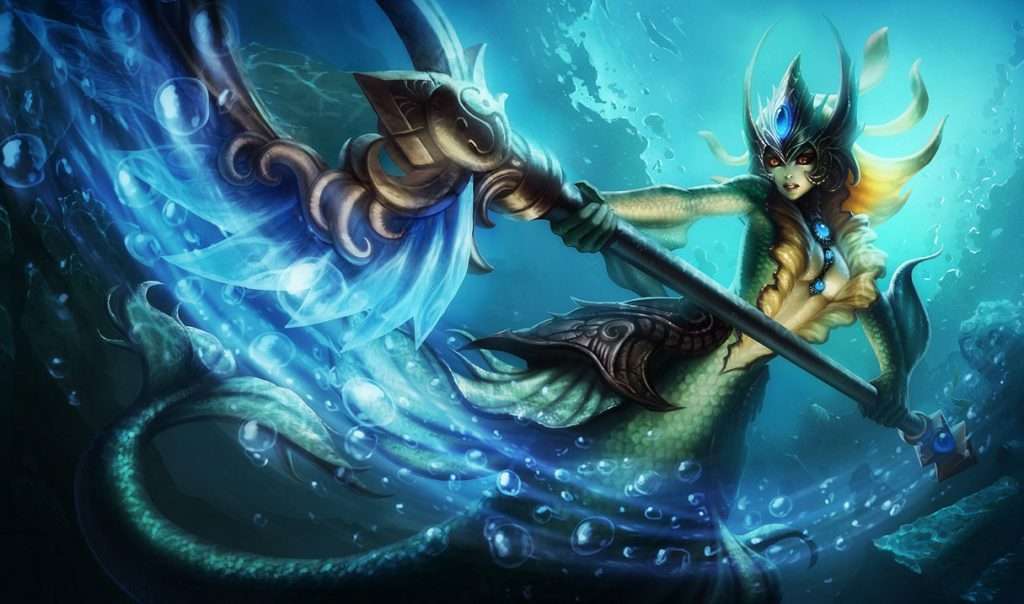 Living in the seas in the west of Targon was the tribe of vastaya known as Marai. A long time ago, they discovered a rift in the depths that bore horrible and creeping darkness that sought to destroy all life forms.

The Marai placed a glowing rock at the center of their village, which is believed to infuse astral magic of the heavens. Its ethereal light protects them from creatures that crawl from the abyss. When the light of this rock known as moonstone starts to dim, right at that moment, Marai chooses their fiercest warrior and bestows upon them the name the Tidecaller.

The Tidecaller must go down the icy darkness of the rift, survive the terrors within and bring back the abyssal pearl. Once the Tidecaller has successfully retrieved the pearl, a glowing wanderer from Targon’s peak will be waiting with a moonstone to exchange for the pearl. This exchange has kept the creatures of the dark restrained. Before, Marai sent their troops of elite warriors to collect the pearl. However, sending tremendous forces into the rift made the monsters stronger because they fed on their energy. Although an army of great warriors would annihilate the monsters by abominations, they believed that a single warrior with a legendary Marai staff capable of controlling the tides and can potentially elude the dangers of the deep and escape with the pearl.

Nami is a headstrong young vastaya and the defender of Marai, who can reshape the tides. She uses her mystical Tidecaller staff to keep them safe from any danger. She is the first of her kind to leave the ocean and explore dry land. She is determined, daring, headstrong, and faces the unthinkable with courage.

Nami had always wanted to be the Tidecaller, but she was young and impulsive. She was known for her stubborn determination that often got her into trouble, yet she was also a fierce fighter. When Nami was an adolescent, the moonstone again lost its light for the first time in a century. Nami attempted to join the trial of the Tidecaller. However, due to her impulsive character, Rasho was chosen over her. Rasho was a prudent warrior known for his level head in battle, and was named the Tidecaller. He dove into the depths of the abyss, but a week passed, another one, and for a whole month the Marai’s wait, there was no sign of the Tidecaller’s return. The elders were worried and argued as the moonstone grew faint. This pushed Nami to a particular decision because she knew someone had to take up the mantle of Tidecaller soon, or they would be facing the fear of their life, or all would be lost.

Grabbing her mother’s bathystaff, Nami plunged into the abyss. After several days, she returned with the pearl. She came back with the Tidecaller’s staff, but she also had a look of horror in her eyes. The Marai were furious at Nami’s impertinence, but the village elders rewarded her bravery by officially designating her as the Tidecaller. Nami ascended to the surface, riding the tide to shore to meet the land walker and an elderly woman was waiting on the beach instead of the stone bearer who was nowhere to be found.

The woman waiting was the granddaughter who bore witness to the last Tidecaller exchange. She explained that the moonstone was gone, as the Aspect, who was the only being who could conjure a moonstone, left the Targon. Nami cannot accept it and vows to find the Aspect and retrieve the moonstone. Her people and their lives depended on the moonstone.

Nami was determined to find the moonstone, and using the power of the mystical Tidecaller staff, she summoned a continuous pool of moving water under her fins. The new Tidecaller swam into a brand new world to resume her quest.

Nami’s base health is 490. As a support, she is a powerful healer, and her abilities give damage and slow down enemies:

Nami sends a bubble into the air towards the targeted area. Once it hits the land, it deals magic damage and stuns all the enemies in the area of impact for 1.5 seconds.

Releases a surge of water that bounces back and forth between allies and enemy champions. It heals allies and deals magic damage to enemies. For each bounce, the effectiveness increases. In maximizing the amount of bounce, it would be best to cast it to an area where more members are present.

Nami empowers an ally or herself, granting bonus magic damage on the next three basic attacks and making their auto attacks apply slow onto targets hit for 1 second.

Nami summons a tidal wave to the targeted direction, dealing magic damage to all enemies within its path, knocking and slowing enemies hit by up to 70%. Enemies are slowed down for 2 to 4 seconds.

Nami is highly rated as one of the best supports in League of Legends. She is versatile and offers various abilities, such as healing, buffs, engage and crowd control. Her healing ability is powerful, and given the right situation, it can hit three times with a short cooldown and low cost. Nami’s heal is considered to be one of the strongest in the game.