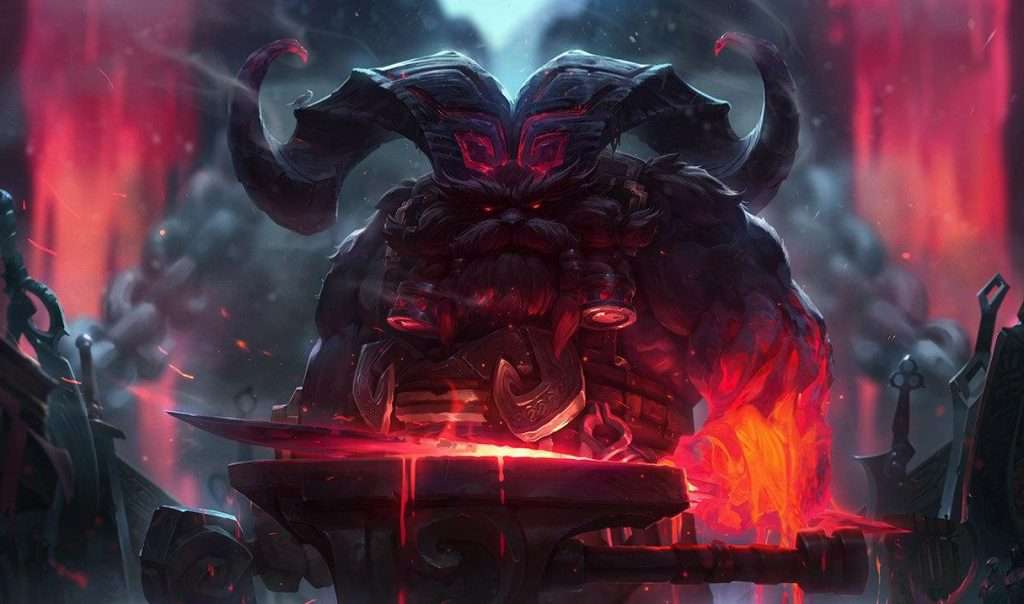 A tribe was driven in the North by the Winter’s Claw. With them was a blind shaman called Legless Kriek who brought them to the mountain with no peak called “the Half-Mountain of Old Ornn.” The slopes of the half mountain were a broken landscape of black stone. They were facing a war against the Ursine. The clouds were dark, flashed lightning, and winds carried the stench of wet fur and decay. Although the tribe believed that they were walking towards their doom, Legless Kriek convinced them that their survival lay at the mysterious source of the fire.

They wouldn’t believe it until a silhouetting humanoid figure appeared in a flash of orange light. There stood Old Ornn, a towering three frost pines, and a hulking beast. He moved toward the herd and stood alone against the Ursine.

Ornn was believed to be the firstborn of the old demi-gods, who shaped the land and brought the first snows. His name Ornn was once famous throughout the lands and spoken by many that one day he will be known as the Freljord. As one of his kind, he was said to value privacy, focus, and solitude. Beneath a dormant volcano that left scars from previous and old eruptions, he worked day and night to build what his heart desired. His creations were priceless tools designed for feats of legend, and lucky are those who have stumbled upon those relics are evident for their bewilderingly high quality. Braum’s shield was also believed to be one of Ornn’s creations thousands of years ago, which remained sturdy until the day it was finished.

However, no one was sure because no one dared to ask him. All the stories of Ornn’s deeds and achievements have been removed from history by his enemies. Many of those left were remembered by many tribes who can trace back their lineage to a single culture of blacksmiths, brewmasters, and architects. The long-lost inhabitant was known as Hearthblood. Neophytes who joined the journey were from the corners of Valoran and gathered on the slopes of Heart-Home to follow Ornn’s footsteps.

Regardless of the mimicking form of worship, Ornn never acknowledged himself as their protector. Nods or frowns were his typical response whenever they were offering their work. But the Heartblood accepted it, and they were determined to improve their skills. That led them to create the finest tools, designing sturdiest structures, and brewing the tastiest ales the world had ever tasted. They believed that Ornn approved of their perseverance because of their goal to better themselves and their craft.

However, in one night, all the Hearthblood had worked for was destroyed when Ornn fought with his brother Volibear at the peak of the mountain. The reason for the fight was that no mortal could comprehend; they were able to witness a storm of fire, ash, and lightning so intense and violent that it was seen ten horizons away. When everything calmed down and the dust settled, the Hearth-Home was like a caldera, and the Hearthblood were turned to scattered bones and cinders.

Ornn would never want to admit it, but he was devastated. Hearthblood gave him hope and a glimpse of potential mortal life. However, this was put into loss because of the indiscriminate anger of his immortal struggle. Bothered by his guild, he stayed isolated and buried himself working for all time.

When the world is changing and transforming to a new era, some of Ornn’s siblings appear to have taken physical form, and their cults of followers were again restless and aggressive. Since Freljord was again fractured and leaderless, ancient horrors lurked in the shadows, waiting for an opportunity to attack.

In the future and in the wars to come, Ornn knows that the Freljord and the whole of Runeterra will need a good blacksmith that they trust.

Living Forge: Once he is out of combat, Ornn spends gold to forge items for himself. Recommended items appear in a particular screen menu, or Ornn can go to the shop manually to buy any item to produce.

Master Craftsman: Ornn and his allies can access special upgrades on selected items in the shop. Each player is restricted to one upgrade.

When Ornn crashes the ground, sending out a crevice that deals physical damage to enemies, slowing them down. After a small delay, a magma pedestal forms at the target area and serves as a tiny wall for a period.

Ornn becomes unstoppable, shielding himself and belching out flames that deal magic damage to enemies in a small cone. Once the final gout of flame strikes the enemies, they become brittle. Next basic attack will knock back brittle targets.

When a target has Brittle debuff, they take additional damage from Ornn’s first basic attack based on their maximum health and their tenacity is reduced.

Ornn charges and deals damage to enemies he passes by. Once he strikes with terrain while charging, Ornn generates a shockwave from the impact that knocks up enemies.

R: Call of the Forge God

Ornn summons a fire elemental at a target area. It travels toward him at an increasing speed. This elemental runs over the enemies dealing magic damage, and inflicts them with brittle. On second cast Ornn dashes towards target direction, if he collides with the fire elemental he called earlier, it will slash towards the direction of Ornn’s dash, knocking up all enemies hit and dealing additional magic damage.

Ornn prefers to do things his way. He doesn’t like bartering with the Rift’s merchants, so he builds his own gear. He uses Searing charge to pin enemies to terrain or bring the terrain to the enemies with Volcanic Rupture. As a leader on the battlefield, Ornn initiates fights on his terms with Call of the Forge God, charges in, tearing apart his foes with titanic force.

Due to his ability to forge new items, Ornn is great with lane-staying power. It means he does not have to return to base. You may need to study up on early-game itemization options so that you can craft the right gear to counter your lane opponent.

Ornn’s teammates can build one of his items, making his allies have a higher gold cap than their enemies. Ornn is becoming the new late-game champion. Other champions who create terrains like Trundle and Azir can work well with Ornn. At the same time, teammates like Poppy and Vayne can pin enemies to Volcanic Rupture’s pillar.

Who counters ornn league of legends?

The answer to your question is Riven.

What lane does ornn play in league of legends?

Ornn is a melee top laner with a kit that revolves around his W and Q, as well as his E. His W is also important as it makes him tough to kill in the late game.

What is ORNN the god of?

The god of the Smiths.

Why is ORNN so popular?

This is a difficult question to answer without more information, but we can assume that popularity among League of Legends players extends back to the days when he was released.

The first thing you need to know about ORNN’s potential popularity is that he’s strong and durable. He also has some CC like his Q and W which means he can be used in teamfights or skirmishes. Other popular champs might have these qualities too, but they don’t come with the added bonus of being immune to death until 40 minutes into the game (temporary). Now here’s where it gets interesting: So far only two skins for him exist: Soul Forger and Hextech Ornn. Plus His skills showcase some humorous moments that aren’t always present

Can I climb with ORNN?

Yes, you can. You need to have a minimum of 10 gold coins, the same amount of coins as it takes to buy a level 10 character.