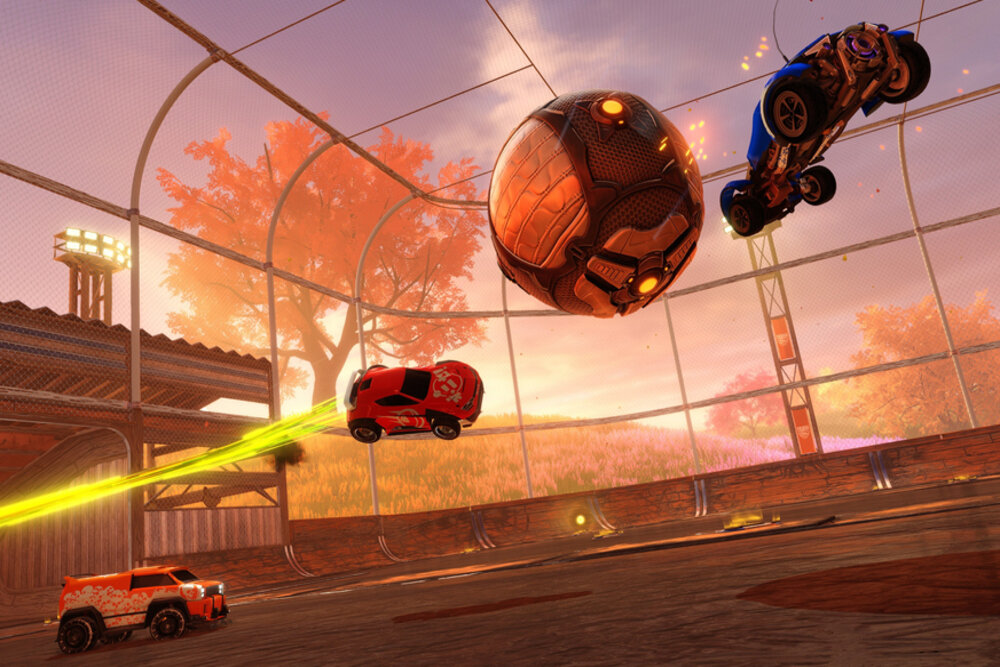 It's no wonder that Rocket League is one of the top eSports games with the biggest prize pools. Watching the pros play is like watching the opening ceremony of the Olympic Games, it's absolutely breathtaking. The precision and reflexes that the pros have come from thousands of hours of training. It's worth watching to learn how you can improve your own mechanics, gameplay, and teamwork. However, it turns out that watching the pros do their thing on Twitch can also earn you Fan Rewards so you can deck out your cars with some flashy new cosmetics!

Read on to learn how.

» Looking to get more free rewards for Rocket League? Try out Buff.

Getting free cosmetics for watching RLCS games and other great Rocket League broadcasts on Twitch sounds like a pretty sweet deal, especially since the cosmetics are actually cool—like the "SPLASH" goal explosion!

All you need to do is go to Rocket League's website, link your game and your Twitch account, and tune into the next Rocket League Broadcast on Twitch. We'll break it down so getting your next cool set of wheels or car wrap will be a breeze.

How to Enable Rocket League Fan Rewards Via Twitch Drops

The Rocket League website has a lot of content, and it's a little easy to get lost when you're trying to get your fan rewards, here's a step-by-step guide on how to get started!

After you've navigated to the Fan Rewards tab, you'll need to scroll down and find the button that says "Link now!" along with some previews of the sweet rewards you can receive, and some helpful FAQs.

Once you've clicked the button, you'll be asked to sign into your Twitch account. Keep your phone handy, because you'll probably get a code for the 2-factor authentication. This step is to help make sure that whenever you're watching select Rocket League games on your linked Twitch account, Psyonix (the devs at Rocket League) know to reward you.

4. Select Your Platform of Choice

Next, Twitch and Psyonix need to know which Rocket League account to send rewards to. This means you'll need to choose the platform you'd prefer to receive your rewards on. If you're on console, you'll want to pick either Xbox, PlayStation, or Switch, depending on which platform you use the most.

If you're on PC, remember that EPIC games bought Rocket League from the Steam store, so if you haven't owned Rocket League before May 2019, you'll have to choose the Epic Version.

If you bought Rocket League on Steam before then, you can still log into the Steam version and use that account.

Keep in mind that once you've chosen your platform and signed in to that account, Rocket League will only reward that specific account when you've logged in. However, if you set that platform as your primary account, you can share your inventory across platforms.

If you only ever play on one platform, you can skip this step, but if you want your rewards across all the platforms you play Rocket League on, you'll need to set a primary account over at Rocket League's Support page:

Once you're there, it's pretty straight-forward with these steps:

Your rank, Rocket Pass level, and inventory from this account will now show whenever you log into any of your linked platforms. Certain items are platform restricted, though.

You're all set up! All you need to do now is tune into selected Rocket League Broadcasts on Twitch to start earning sweet rewards. It's important to know that the rewards are time-based, and you'll receive random fan rewards throughout the Broadcasts.

You can find all the official games on the Rocket League Twitch Channel, and most other official RLCS and CRL Broadcasts will be enabled for Fan Rewards.

How to Know if You’ve Earned a Fan Reward

Once you've started watching an official broadcast, you'll be able to track your reward progress on Twitch by clicking on your profile icon, then selecting "Drops." When you've spent enough time watching an official broadcast, Twitch will send you a notification telling you which reward you've earned. Once you've logged into your linked Rocket League Account, you should receive that item in-game to show off to your friends.

Even if you come to the live pro games for the rewards, you might just end up learning a thing or two during your time waiting for those sweet drops. Whether it's watching how the pros come up with new tactics for beating opponents in RLCS or seeing amazing new mechanical tricks in the Freestyle Tournaments, you'll be earning and learning simultaneously.

And who knows? maybe you'll have discovered your new favorite eSport to watch along the way.